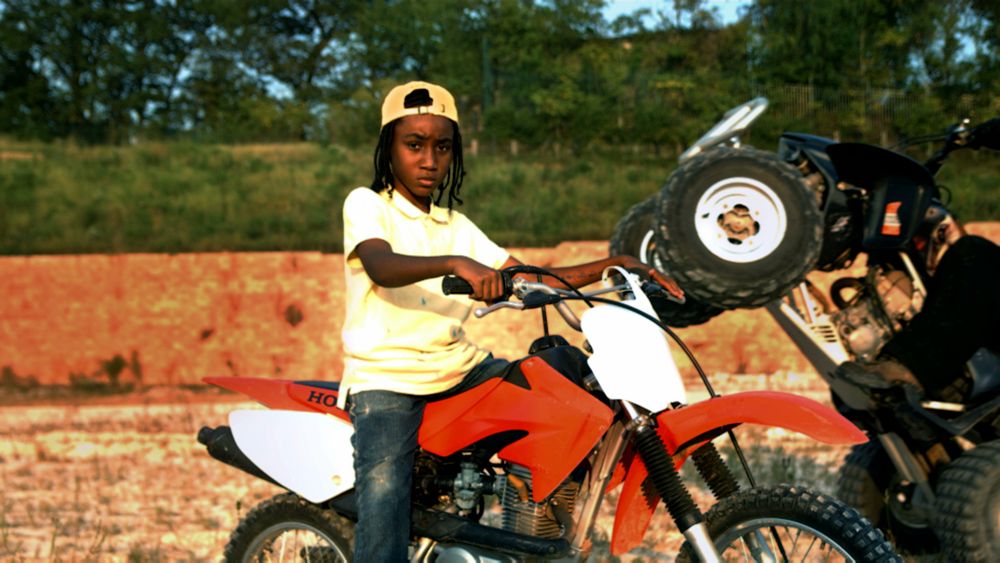 ABOVE: PUG IN THE 12 O’CLOCK BOYS. PHOTO COURTESY OF OSCILLOSCOPE FILMS .

There’s a surreal beauty to watching a group of dirt bike riders simultaneously pop perfect wheelies in slow motion. Instead of a daring stunt, the act looks more like a synchronized dance, with bikes and riders magically suspended—front tires reaching valiantly toward the sky. It’s images like these that make 12 O’Clock Boys such a mesmerizing film. Directed by newcomer Lotfy Nathan with an assured hand, the documentary follows a group of Baltimore men as they tear through the city on dirt bikes and quads. The film refers to the group’s name, which comes from the ultimate goal of wheelie-ing so that their motorcycles sustain a completely vertical position.  It’s a sport with no has no real judges or rules, just the thrill of the ride and the respect of the community.

Though Baltimore is often associated with the poverty, drugs, and violence depicted in shows like The Wire, 12 O’Clock Boys is more concerned with the loose-knit group of riders and their families than the broader socio-economic problems facing the city. Still, riding four wheelers and dirt bikes through urban areas is very much an illegal activity, so the interplay between the police and the 12 O’Clock Boys represents a large part of Nathan’s film. The heart of 12 O’Clock Boys, however, isn’t riders’ cat-and-mouse game with the cops, but the journey of a young boy named Pug as he grows from a wanna-be with a tiny quad to a full-on 12 O’Clock Boy. With Pug, Nathan gives us one of the most compelling real-life personalities in recent memory, as we follow the cocky youngster’s quest toward sub-cultural acceptance. We caught up with Nathan to talk about the many years it took to make the film, his relationship with Pug, and the most dangerous part of filming the 12 O’Clock Boys.

NATHAN REESE: Let’s start with how the project began. When did you first decide to film the 12 O’Clock Boys?

LOTFY NATHAN: So, I was living in Hawaii at that time… just kidding! No, I was living in Baltimore, studying painting and fine art in college there. While I was attending school there I’d seen these guys buzzing around the city on a few occasions during my first few years there. I took a documentary production course just kind of on a whim. I thought it would be interesting to pursue these guys, not really expecting results. So essentially it started off as a school project. I saw that that they were receptive to being filmed. The material that I was getting was really speaking to me and quickly took over my creative efforts.

REESE: What was their reaction when you first approached them to film? Were they cool with you hanging out with them from the start?

NATHAN: Yeah, I would say so. For the most part it was all about getting acknowledged anyway. The reason that a lot of the riders film themselves, put it on YouTube, name themselves, rebrand it every summer, tear through the streets—it’s to be seen. They all want to be understood. I think, obviously, there’s the question of who’s filming you? What are their intentions? But I stuck around long enough to thaw out whatever skepticism there might have been.

REESE: Was there ever any concern from them that the police might use the footage to prosecute them more effectively?

NATHAN: That was a concern I had as well. Everybody had that concern. But, again, the riders were filming themselves at first. It wasn’t revolutionary, it wasn’t the first time they were seen. The police would actually have had an easier time pulling from the stuff that’s been made public, rather than my footage that I was building up for a documentary that is actually very difficult for police to subpoena.  I think the recent Ken Burns film, Central Park Five, actually redefined policy on that. As I understand it, the material was almost subpoenaed by prosecutors in New York and it wasn’t allowed.

REESE: How did you meet Pug for the first time?

NATHAN: I met Pug in 2010 after about a year and a half of filming the riders. I was getting a lot of action-packed, high-octane material, but it was just a general subculture piece. I was looking for heart in the story and narrative thread. So I was really still fishing. In April, I was introduced to a little kid who was zipping up and down his block on a little four-wheeler. He immediately had a lot of character in my eyes. His family was very colorful. His mother was sharing her whole story and, I didn’t know it at the time that he would be seen as the protagonist of the film, but there was this vulnerability on his face and at the same time he was making efforts to emulate the older riders. Intuitively it felt like a great point of entry.

REESE: What has Pug’s response been to the film since you’ve started screening it?

NATHAN: Well, it’s hard to distinguish between what of his confidence, or determination, or ego is based on the film and what is just him as a kid. He’s got a very strong personality—his whole family does. I’ve felt that at festival screenings he was surprisingly unfazed by it. He was pretty cool and collected. But it’s impossible to say, right now, what that the impact will be. There’s the initial buzz and how it could be in five years—really I have no idea.

REESE: Do you think that your presence around a kid growing up in the environment was changed the way his life was heading? Was that a concern of yours?

NATHAN: Yeah, of course. That really personified the whole issue of filming the dirt bike riders in general. I didn’t want to cause accidents. I didn’t want to encourage it, per se. And then filming Pug, like I said, there’s vulnerability on this face. I didn’t want anything to happen to him—I don’t want anything to happen to him. But I knew that I was endeavoring to make this movie and I knew that was the story to tell. Ultimately I see Pug being such a strong-willed person, let alone a subject in a film. He knew what he wanted. His aim was very clear. His mother’s word takes precedent over mine. There’s a certain dynamic and structure that he’s living in that dictates much stronger than whatever I could ever bring. And at the same time, I was never going into these situations to preach or to teach. I was learning, if anything. Even as a young kid. Inevitably I did have personal conversations with Pug about the whole thing, my perspective on it. That stuff happens. But he’s just diehard about wanting to ride dirt bikes. And he would be regardless.

REESE: What were the moments you felt most unsafe while filming?

NATHAN: I think the most unsafe-feeling moments were in clashes with the police. Because I was filming the riders and that was my focus, I became a sort of enemy of the police, just by association. There were times when I was held up by the police and that was really uncomfortable. I tried to explain the intention, but that was obviously a big debate. There are members of the police force who are really frustrated, and who are being taunted by the riders on certain occasions. When they got someone like me, I think some that was kind of coming out.

REESE: There’s a pretty long span from the beginning of the film to the end. How were you organizing your life during the filming process?

NATHAN: Like I said, it started off as a school project. I spent maybe two days filming in 2007, maybe five days in 2008, 10 days in 2009, and then 60 days in 2010. That was always during the summer, for the most part. By 2010, I was ready to call it quits. I had moved to New York. Then, really begrudgingly, I went back summer of 2011 and went at it again. Something would always bring me back to Baltimore, as much as I tried leave and say that the project was finished. So then that basically happened three years consecutively. It wasn’t some valiant effort. It was draining to keep the effort to film, but it was the most valued creative work I was doing. The shooting fizzled out as the edit took over. Eventually we were shooting for the edit, which is a great place to be. This whole project moved really intuitively, really slowly. Finally the edit took precedent and any other shooting was speaking for that edit.

REESE: How many hours of footage did you have?

NATHAN: We had about 300 hours of footage. Another thing I will say, is that it was difficult to keep going with this project but there was a lot of help. It wasn’t financing from institutions or things like that—this film didn’t necessarily have a pretty subject. It wasn’t a social issue. It wasn’t a heartwarmer. It wasn’t sweet. So it was really hard to get help with it for a long time. But friends and peers—producers on the film—their help really helped keep the project afloat.

REESE: Some of the most striking scenes in the movie were the ultra slow-motion shots of the riders. How did you capture those?

NATHAN: It wasn’t just me filming, and the Phantom camera stuff was brought it by my producer Eric Blair. They did incredible work bringing super high-end production value to something that was otherwise pretty scrappy. The Phantom camera shoots were really hard to pull off. By then I had the trust of a lot of the riders, and knew the patterns and where to go. It’s a very finicky camera, it takes a large time to set up, and it’s temperamental—It takes a large time to set up.

REESE: Near the end of the film, it’s intimated that Pug is able to steal back his bike, but it’s left open-ended. Can you talk a little bit about your decision to end the move on an ambiguous note?

NATHAN: It’s intentional that it’s sort of vague. I think that the ending should speak for itself.

12 O’CLOCK BOYS IS SCHEDULED TO OPEN AT THE ANGELIKA FILM CENTER AND THE EMPIRE 25 ON JANUARY 31. IT WILL BE AVAILABLE ON VIDEO ON DEMAND THE SAME DATE. FOR MORE ON THE FILM, VISIT ITS WEBSITE.