The Dorian Electra Guide to the Perfect Guyliner 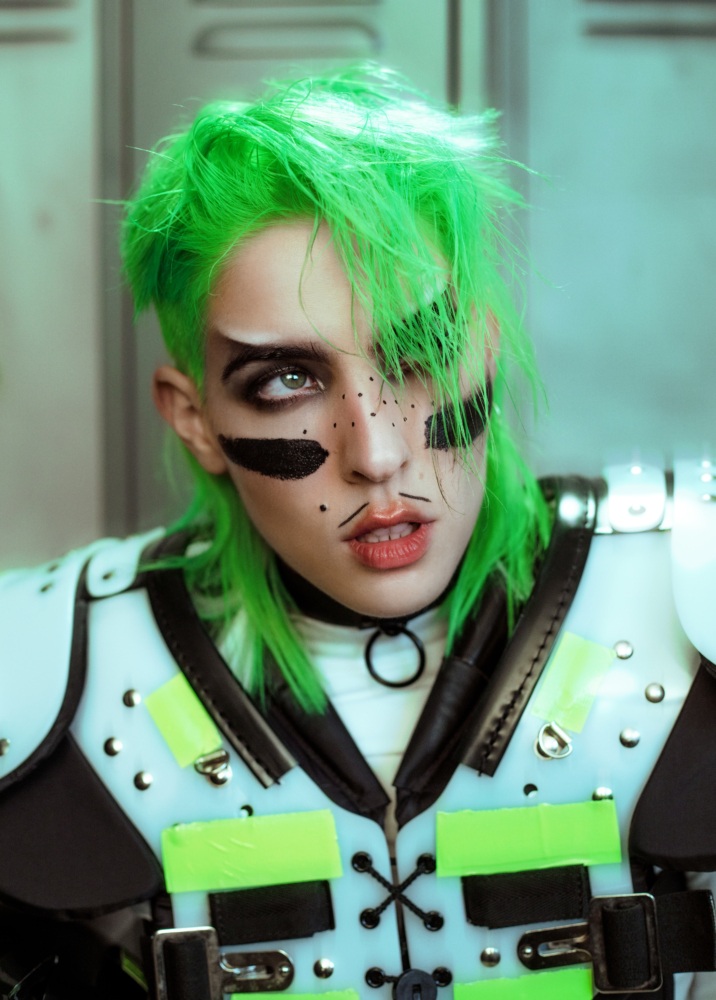 Dorian Electra isn’t exactly a pop star, or a makeup artist, as much as they are an explorer of genre and gender. The Los Angeles by-way-of-Houston queer performance artist found their spotlight moment with “Career Boy,” a Liberace acid trip of a song that manages to both critique capitalism and question the social constructs surrounding masculinity—topped off with a heavy dose of camp, of course. Flamboyant, Electra’s first album, is a pop magnum opus in which the singer holds nothing back musically, politically, and culturally, all the while having the time of their life. On “Guyliner,” Electra delivers an ode to the emo-rockstar look of choice of the early 2000s. “It was a really special cultural moment for masculinity that helped make it okay for guys to wear tight girl’s jeans, makeup, have ‘crazy’ hair, and be more flamboyant,” Electra says.  Along with the recently released visual, an acid green daydream featuring MySpace-era glamorous looks and appearances from some familiar faces like Nadya (Pussy Riot), Chester Lockhart, and Hana, the eclectic performer also released a special edition Guyliner in collaboration with Andy Candy Makeup; 20% of the proceeds go toward the Los Angeles LGBT Center. Below, Electra shared with us a few easy steps to achieve the perfect guyliner look. In theirr own words: “Look in the mirror / I’m feeling fine / It’s crystal clear that it’s time to line my eyes.”

Decide if you want to go for a messy “I woke up like this” look or a more defined geometric shape. I like a powder for the former and liquid liner for the latter. The messy “not-trying-too-hard” smudgy-smokey eye look is really the classic “guyliner” style championed by male rockstars for many years. For me, the quintessential era for guyliner was the mid-2000s with the emo Myspace-scene aesthetic. There’s an amazing video of Pete Wentz doing a “guyliner” tutorial that I highly recommend watching. He explains how to apply the eyeliner first with a pencil, then smudge it with your finger because, “If you’re a guy, you don’t really want your makeup to look perfect.” He finishes of his look with a layer of dark eyeshadow on top—applied with his finger. Of course, I don’t think “guys” should just be restricted to wearing makeup that looks purposefully effortless, but I do think it’s a funny idea, and it looks sexy.

If you’re using liquid liner, make sure it’s waterproof to protect against sweating and/or crying in the club. Then again though, for those going for the messy look, crying to smear the makeup could be the final step!

Remember that “scary” eye makeup can also be sexy. I love putting pink and red under my eyes to create a kind of freaky sleep-deprived vampire vibe. Sometimes I add a vertical line with eyeliner above my eyebrows and a line coming down from beneath my eye to create a scary sexy clown look. Don’t think you have to just to stick to “pretty” makeup in order to look and feel sexy. Make sure to do your blush and inner eye corner highlight first so you can draw over it. If I’m planning to do a design with the liner, sometimes I’ll outline it with a small brush in a dark color eyeshadow (like a dark red or grey-ish black). Then draw the shape over it in liquid eyeliner in order to create a glow effect around the lines that gives it more dimension. Using white eyeshadow along the edge of the design can help it really pop out and look 3D.

If you mess it up, just go with it, and try to match it on the other side.