Clothing and Accessories Shayne’s own.

It has been more than two years since Hood By Air presented its last runway show at New York Fashion Week, and even in absentia, the label’s influence on the industry has grown so large that it is difficult to see all at once. Hood By Air’s collections, created by its founding designer Shayne Oliver, perfected the union of streetwear and high fashion, and in doing so, helped create the global merchandising blueprint for menswear today. Oliver also invited rappers to become his ambassadors half a decade before Travis Scott became a spokesperson for Saint Laurent, or Playboi Carti walked for Louis Vuitton. Perhaps, most importantly, Oliver’s label did so while remaining decidedly antiestablishment and queer.

But as unexpectedly as it flew into creative dominance, Hood By Air disappeared off the face of the Earth. In the intervening time, Oliver has kept relatively busy: He executed a one-off reboot of fellow New York fashion savior Helmut Lang’s brand, and has released collaborations with Diesel, Longchamp, and Colmar, all while remaining coyly silent about the future of his own company. Perhaps no one knows more about rewriting the rules of fashion — and getting crucified in the process — than the musician Kanye West, whose own company, Yeezy, has experienced, in equal measure, groundbreaking successes and mysterious hiatuses. According to both Oliver and West, however, hibernation is a valuable tool in a commercial industry that feeds on experimentation. As he prepares for a rumored Hood By Air relaunch, Oliver spoke with West about the perils of being too productive.

KANYE WEST: Hood By Air has been in hibernation. What have you been up to? Why are you hibernating?

SHAYNE OLIVER: It was getting to a point where I felt like I was being held to an extreme level. Hood By Air had these emotions and this ethos that I respect, and I wanted to continue respecting that as much as possible. Am I meant to constantly be working on something without knowing exactly what I’m aiming toward? I didn’t really feel like it was healthy. I felt like I needed time to learn a bit about myself. That’s really why I took a break.

WEST: Having the blessing or opportunity to be a creative should always be therapeutic, not stressful. I feel like people really need to see the McQueen documentary to understand the level of pressure that is put on creatives when we’re forced to put out things that we don’t believe in.

WEST: How did the Helmut Lang collaboration come about?

OLIVER: I think it was in the stars. I had been pushing out that aura for a while, and I know that Akeem [Smith, former Hood By Air stylist] is pretty close with Isabella [Burley, former editor-in-residence of Helmut Lang], and Akeem mentioned my interest in Helmut’s archive and how inspiring it was. I think Isabella was in talks with Helmut Lang, and she came to the studio and she was like, “Listen, I’m really looking for people who have these singular voices that create almost culturally infectious items.” That evolved into a major residency there, and that’s where the “As Seen By” title came from.

WEST: When I saw it coming, it read to me that you had become the creative director of Helmut Lang — and it read to other people that way, too. And it felt right, and it felt deserved. The reason I’m on the phone with you right now is that of our generation of designers, you are the strongest of all of us. Of this entire crew that came up around the same time, you are the most deserving of one of these positions. So it’s interesting to me when you get these situations, because, like, I’ve been fighting and struggling and arguing and talking and having conversation after conversation about being the creative director of Adidas.

OLIVER: It’s four at this point.

WEST: That’s why I’m interested to see an HBA comeback. Who was backing the brand?

OLIVER: The marvel of HBA is that we never really had a backer backer. We always did it on our own, and we had people who would come in almost on a licensing thing where they would say, “Let me drop this, and I’ll take this percent off the sales or whatever.” That’s happened maybe a couple of times. It was an insane ride and we felt like we wanted to elevate to the next level. Then we began a partnership with New Guards Group in Italy, and that was only a temporary situation. That was around the time that I came back to New York to do the show in fall 2016, I believe, and then that was our last season. After that, we kinda had to come back to be on our own. That was when the question came up: “Why am I doing this?” 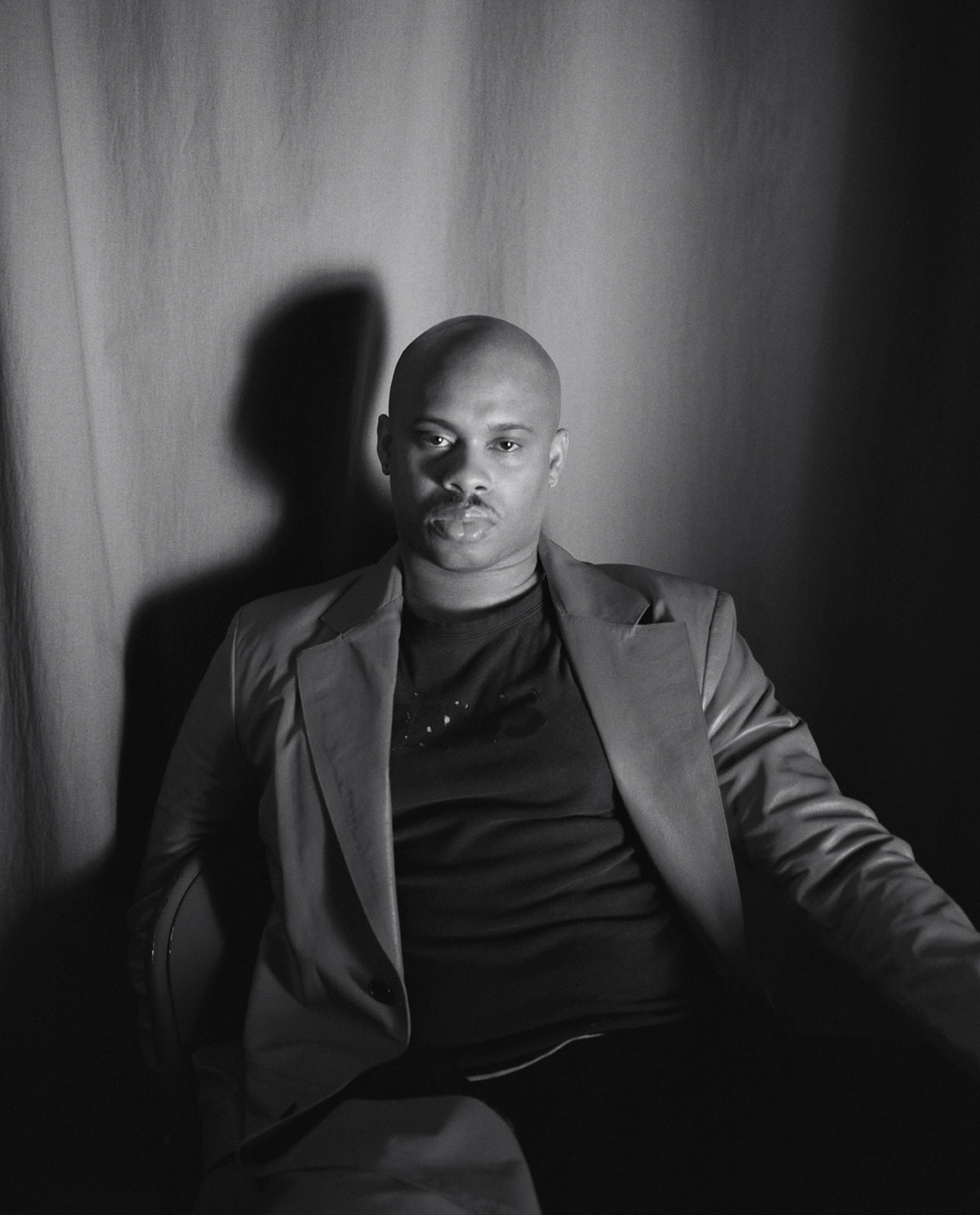 WEST: Renzo [Rosso reportedly was interested in buying] New Guards Group, and you worked with Renzo at Diesel. Did you think about sitting with them for support?

OLIVER: To be honest, I love Renzo, but I don’t really think the conversation really came up because of the way I got into bed with him. It was through another deal, and I was doing it as an introduction to a relationship. I love denim and I wanted to learn more about how to make official denim, and I wanted to learn about the history of what he had done. The conversation never really went further. It’s kind of weird when you’re in the vortex of the Italian corporate world. It’s very different and very insular, and I’m so independent. I need someone to have a really open conversation with me in order for me to feel invited into a situation.

WEST: I love that Rick Owens can maintain and keep putting work out. And then I see people like you or Haider [Ackermann], who get a really well-oiled machine to support your ideas for just a season or two. Then Haider gets pushed out of Berluti, or someone has the “creative” idea that you’re just a one-off at Helmut Lang. Whether it was Akeem’s photographs, or your designs, I’m still going to run onstage [at the VMAs] and tell you how they had the best video.

WEST: I was talking to Haider about how elegance has to lead the conversation in any form of creativity, whether it’s fashion or writing or film. I was talking to Francis Ford Coppola about this, too — I know I’m doing heavy name drops, but I feel like society needs an aspiration. Especially now.

WEST: They say HBA has been credited with elevating streetwear. What does that mean to you when someone says that?

OLIVER: When I look at streetwear, I don’t ever think of it as coming from a cool club. For me, elevating it is about exposing how those items have affected other walks of life, other than just the cool club. In itself, I think that opens streetwear up to a larger market of people, because the culture it comes from is very insular. It’s weird because they say that about fashion people, but it’s the same thing within the streetwear world, you know what I mean? When I see streetwear, I see silhouettes. Some people tend to be more intuitive about it, like the people that I grew up with from inner-city backgrounds, but in the larger discussion about luxury, streetwear is already in the merchandising plan. Poncho by Rick Owens. Shoes from Hood By Air Museum.

WEST: You once said that there’s a lot of “blood, sweat, and tears behind these ideas.” If you want to bite into the culture, eat all these lemons, and say, “I’m a part of this,” then you have to actually pay for it. There is a cost.

OLIVER: But that specific point of view is very rare. I think everyone can say they now know what we were doing, but at one point, it was undiscovered and not really messed with. Now there’s an inflation idea and it’s normal, where people are like, “Who has the most expensive puffer? And how can I acquire that puffer because it’s a status symbol?” As opposed to five years ago, when it was more that we’re trying to keep this a little bit respected. I think that juxtaposition is really necessary, but what I’m hoping for the next steps of HBA is to really contribute to experimentation in the world as opposed to just the commercialization of it.

WEST: I like those two words together: experimentation versus commercialization. Capitalism is The Giving Tree, and people take branches until the tree can’t give anymore and then they go find a new tree. That’s why moments of hibernation and getting off the schedule are necessary. They should be more commonplace. They should be more expected. Henry Ford wanted the Amazonians to keep on the time schedule, and they didn’t do it. They were like, “We want to wake up when we want to wake up.” That feeling of a rush right before the fashion show and that nervous energy has everyone so scared. We as human beings need to create at a pace that feels right.

OLIVER: It’s true. That fake excitement of the schedule really deterred me. It was the fact that everyone was trying to make moments. I get that you have to create that, but at the end of the day you can tell from ten miles away what’s fluff. I just couldn’t really be involved in that anymore. I’m supposed to be cool, but I just didn’t feel like it was. You can’t just always be an open book for people. You have to close the door and you have to say, “Okay, now it’s time for me to be private.” And take a minute to think about what you love about it. “What could I be doing better? How can I make it more human this time around? How can I make it more extraterrestrial?” I kind of respect the way that music does it, where you release an album, and then the tour and promotion is all just based on that thing you created in the studio for a really long time. I think that designers should be allowed to do that now, especially since that is exactly how people interact with clothing at this point.

WEST: I think those are some good bars to kick for 2019 creatives. I don’t want it to read like a jab at Hedi, but I just wanted to point out that sometimes it reads like one guy gets to have access and the next guy is just as talented and has to go down this road of heavy struggle. I guess it’s just the way our simulation called life is set up.

OLIVER: I’m still a baby in people’s eyes, and I think maturity can play a part in how people view that stuff. Organization has a lot to do with internal structure, and sometimes I don’t even really see that as my job, but now I do. Growing up and getting a bit older, I understand that I have to implement that as much as possible from my point of view. Then you can sort of balance out that idea of the wunderkind that is doing what he wants. I would never want to only be on a corporate wheel—I want to be able to experiment—but it’s all based on beauty and pushing forward, not pushing for no reason. That’s what I’ve learned in the last couple of years.