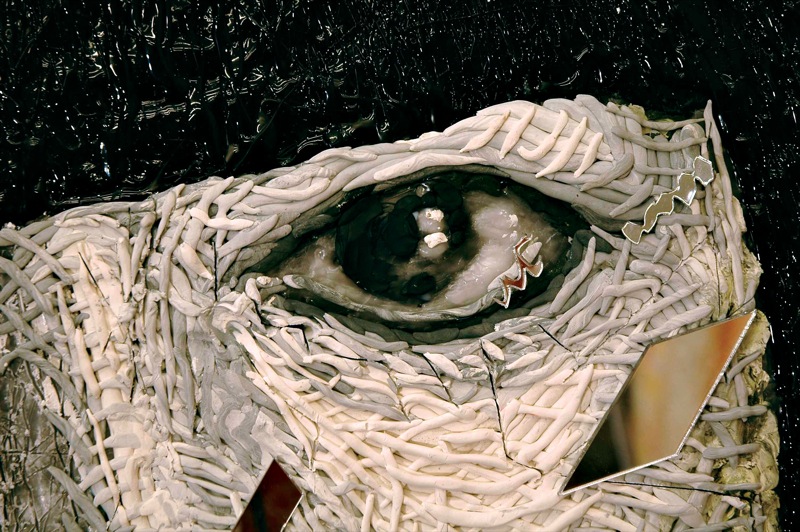 My approach is simple. It is nothing other than what I am thinking at the time I make each piece of clothing… The result is something that other people decide.Rei Kawakubo

Rei Kawakubo went to university and studied art and literature, like a lot of bright girls do. But then she taught herself how to design, set up shop, and soon started to change the fashion world. Maybe design came over her like a dream, or maybe she was possessed by genius. Wherever that force majeure came from, suddenly this small, mild-mannered woman who had worked in textiles and as a stylist for a bit began to create startlingly original clothes that made the world take notice. She started making clothes under the label Comme des Garçons in 1969 (later incorporating it as a company in 1973). It quickly established an aesthetic that caught on with the art crowd and chic bohemians, and influenced all of fashion. By turns conservative (think black-and-white) and radical (think asymmetry and unfinished), Comme des Garçons became the preferred label of the avant-garde and the highly independent. But it never settled into a set style, and as black gave way to color, near normality would sometimes disguise subtle subversions. Kawakubo designed clothes with a modus operandi more familiar to conceptual art than to fashion. Despite her radical approach, or maybe because of it, Comme des Garçons is today a great success, commercially as well as artistically. Forty years later, she’s still at the forefront of fashion, doing her very own thing with the same uncompromising ideals and method. Although she’s very much in control of all aspects of her operation, she is hardly focused on herself-Comme des Garçons now also offers lines created by staffers Junya Watanabe and Tao Kurihara. And recently the company extended its reach (and price range) with a collaboration with the huge retailer H&M. Rei Kawakubo was interviewed in Paris by Ronnie Cooke-Newhouse, a longtime friend and creative director who has created advertising for Comme des Garçons among others.

RONNIE COOKE-NEWHOUSE: Journalists sometimes describe you as intellectual, ascribing to you a kind of rigorous, cerebral approach to fashion. Is there another way you would describe yourself?

REI KAWAKUBO: I am not conscious of any intellectual approach as such. My approach is simple. It is nothing other than what I am thinking at the time I make each piece of clothing, whether I think it is strong and beautiful. The result is something that other people decide.

RCN: Next year the company will be 40 years old. When you started, you did so to be a free and independent woman in Japan. How do you remain free?

RK: In terms of creation, I have never thought of suiting any system or abiding by any rules—either a long time ago or right now. In this respect I have remained free. The necessity has grown, as we have gotten bigger, to think about commercial aspects of the business more and more, because of the responsibility we have toward our staff and our factories.

RCN: Does the deadline of having to show a collection a few times a year help or hinder your creative process?

RK: Since we are in the business of fashion, deadlines are normal. I can’t say if they help or hinder me.

RCN: What is so important about being new? Does creation have to be new?

RK: Creation takes things forward. Without anything new there is no progress. Creation equals new.

RCN: Why do you always go back to black?

RK: I have always liked black. However, recently black has become as habitual as denim, so I wanted to find tomorrow’s black.

RCN: How do you balance art and commerce and still remain free.

RK: Feeling free inside oneself is being free.

RCN: Is there something hopelessly bourgeois about being an artist? Do you escape that by making something utilitarian, even if it is described as art?

RK: It is not in order to escape. There is surely worth in making simple things, and there is worth when utility is the concept. But art need not be bourgeois, necessarily. There is nothing bourgeois, for example, about hair artist Julien d’Ys great creation for this collection, where hair, hat, and makeup become one.

RCN: Fashion has become a big business, dominated by large corporate enterprises, like LVMH and the Gucci Group. You collaborate with this world, as you recently did with Louis Vuitton, but you also hold yourself completely apart from it. What is your attitude toward the dominance of fashion by these corporate entities?

RK: There’s no deep meaning. It’s just business. But even with business methods and ideas, it is necessary to have something new.

RCN: Is fashion purely a practical and aesthetic activity, or does it possess a moral dimension?

RK: What you wear can largely govern your feelings and your emotions, and how you look influences the way people regard you. So fashion plays an important role on both the practical level and the aesthetic level.

RCN: Do you care about critics and commentators?

RK: It would have more meaning for me to hear what critics have to say if their values and their ways of living were deeper and more serious.

RCN: Comme des Garçons has one eye-from fabric, form, shape, shops, and communication to the way you run your company. That is obviously very important to you.

RK: For me this goes without saying, given the nature of the company I decided to create. It is primordial.

RCN: You say you are a fashion designer, but many people call you an artist. Why do you think they see you as one?

RK: I guess it’s because I endeavor to make clothes that didn’t exist before.

RCN: Does creating around the human form put limitations on your work?

RK: There are no limits.

RCN: How does it work with Junya and Tao? At what point do you see their collections?

RK: They are members of the Comme des Garçons company, and I see their collections at the rehearsal just before the shows.

RCN: Have you ever been tempted to sell the company?

RK: I have wondered what it would mean for us and a buyer to join together.

RCN: You don’t seem to want to be defined or aligned. How would you define yourself?

RK: I don’t think of myself as anyone special, and I would not know how to define myself.

RCN: An artist friend defined the difference between art and fashion this way: What an artist makes and sees stays as is; what a designer makes is like two objects—one is what is perceived in a shop and the other is how it looks in the mirror.

RK: Is finding a difference so important, really? Fashion is not art. The aims of fashion and art are different and there is no need to compare them.

RCN: Does the economic downturn affect the way you approach designing a collection. Do you think you have to design easier pieces?

RK: Comme des Garçons has always traveled at its own pace and will continue to do so. In good times and bad times the company is more or less the same.

RCN: You don’t use real fur. You won’t work with real fur?

RK: I love all animals.