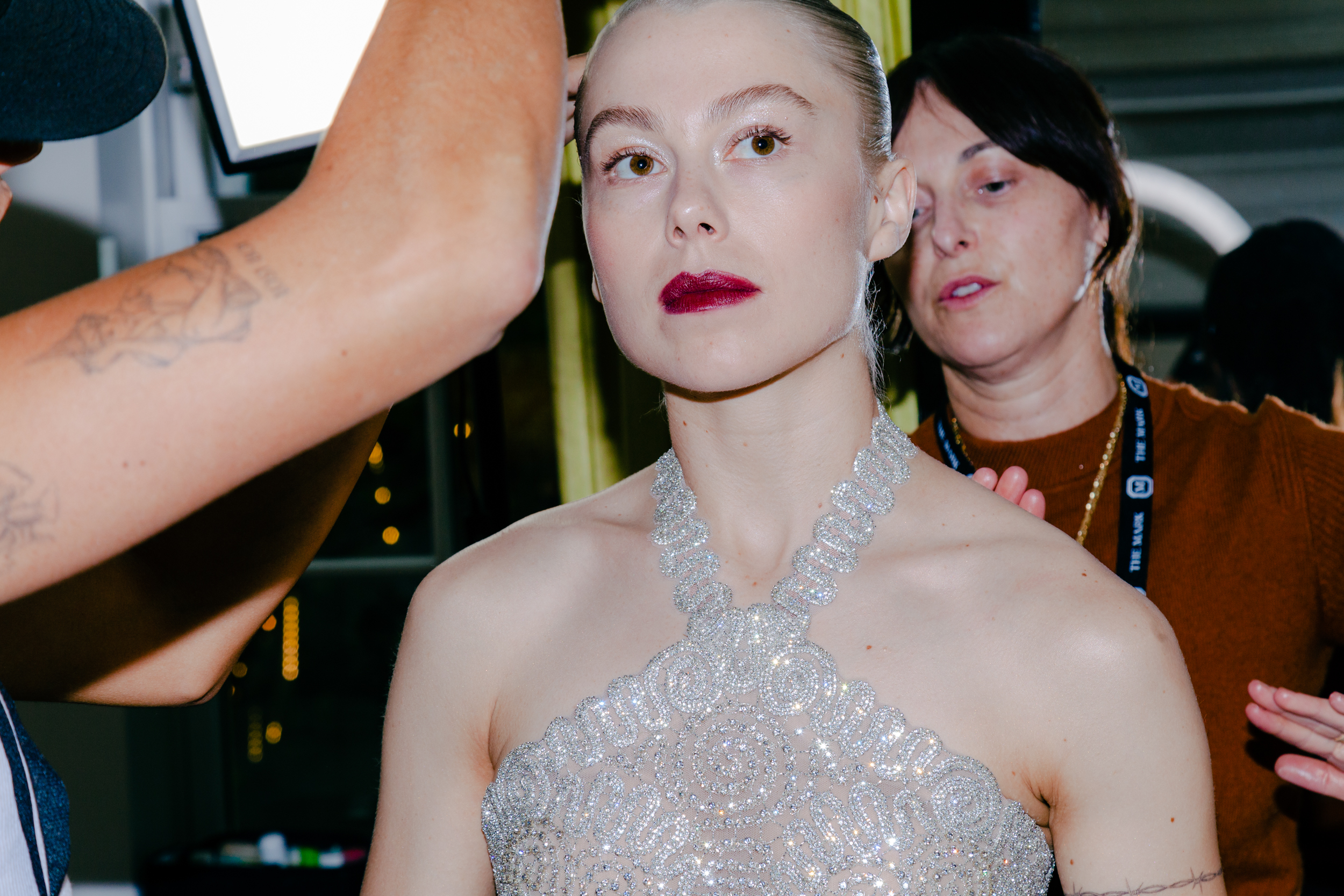 Last night, Phoebe Bridgers traded her skeleton suit for something more Guilded Age-appropriate. The singer’s Met Gala look, a crystal-encrusted Jonathan Simkhai gown, stunned on the red carpet, but all the encouragement in the world couldn’t ease Bridgers’ jitters on the eve of her first Met fête. Here, after several liters of coffee, a few stress naps, and countless hours of Harry Styles radio, the 27-year-old singer—and her friend, the designer Jonathan Simkhai—called us in their matching Mark Hotel robes for a caffeine-fueled chat about Bridgers’ custom look, falling downstairs, and their plan for sidestepping the night’s no cellphone rule.

INTERVIEW: Phoebe, what was the first thing you did this morning?

PHOEBE BRIDGERS: Well, I ordered a huge carafe of coffee and I drank, like, all of it. Then I passed out again, because I was so stressed out. I took a stress nap.

INTERVIEW: Who are you wearing tonight?

SIMKHAI: Gilded, for sure. We followed the assignment. Sculpted, and dazzling.

BRIDGERS: It’s elegant and punk at the same time, which is why I love it so much. I need one other word that’s not too obvious. Let’s say encrusted. INTERVIEW: How do you feel about your first Met Gala?

BRIDGERS: Extremely nervous, but I’m in good hands. It’s just incredible to wear something made for you. So often when you go into a dressing room and try something on, you feel like shit and it’s so unflattering. But having a team of people make something so beautiful, it’s like the best confidence boost ever.

INTERVIEW: What’s the vibe in your dressing room right now?

BRIDGERS: There are, like, a million people in here.

SIMKHAI: We’re talking to you in our matching Mark Hotel robes. BRIDGERS: It’s so hectic. I had oatmeal this morning, with peanut butter and berries. It seemed like the least risky choice for my nervous stomach. I was listening to Grouper earlier to calm me down, and now we have Harry Styles radio on while I’m in hair.

INTERVIEW: Does your look have pockets?

SIMKHAI: I love a pocket, but not for tonight. I’ll be holding all of Phoebe’s things.

BRIDGERS: Jonathan will be my bag for the night. Or holding my bag, at least. INTERVIEW: What are you bringing to the Met Gala?

INTERVIEW: How do you feel about walking up those Met steps?

BRIDGERS: This is the first time in—I’m not kidding you—five years that I’ve worn high heels. So yeah, I’m nervous about those steps. I keep telling myself that, if I fall, it’ll be infamous at the very least. The dress is beautiful, so I’ll go down in a blaze of glory. INTERVIEW: Have you practiced moving around in this dress?

BRIDGERS: I probably should have.

INTERVIEW: Who are you excited to see tonight?

BRIDGERS: Wow, I don’t know. I think I’m going to be starstruck immediately. But I have no idea who’s going to be there, which is kind of nice.

INTERVIEW: Are you a confident mingler?

BRIDGERS: I’d say I’m a loud mingler. I’m kind of nervous about how many pictures there will be of me cheesing really hard. Like, all teeth, way too big. SIMKHAI: I’m also worried about the cheese factor. I am already smiling ear to ear.

INTERVIEW: What are some of your Met Gala dos and don’ts?

BRIDGERS: I guess we’ll find out! We’re not allowed to bring our cell phones—I love a bathroom selfie, and so does Jonathan. So, we’ll see if we’ll be able to abide by that rule.

INTERVIEW: What are your after party plans?

BRIDGERS: We’ll see where the night takes us. As excited as I am for the gala, I’m so excited for after the gala. The pressure will be off. INTERVIEW: What is the best time to arrive at an after party?

BRIDGERS: I have misfired on that a couple of times. If you get to a party too early, you’re stuck doing a lot of emotional labor for the people who planned it, and are nervous that nobody will show up. So I think the answer is very late.