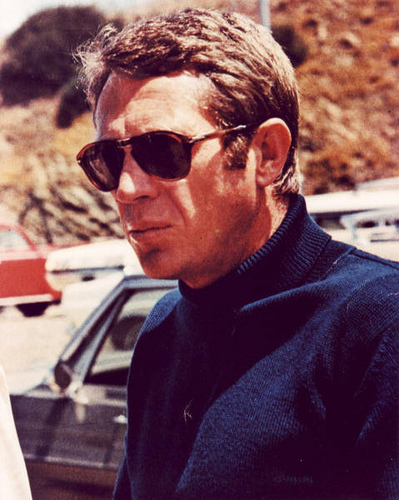 Except for a cigarette pluming nihilistic blue smoke, there are few props that telegraph onscreen cool better than a pair of dark sunglasses. And few sunglasses are more iconic than Persols, which have been around since 1917 and masking the intentions of leading men since 1961, when Marcello Mastroianni first wore them on the big screen in Pietro Germi’s noir farce, Divorce Italian Style. (LEFT: WHICH STEVE MCQUEEN MAKES IT TO THE WHITNEY TONIGHT?)

Others followed: Steve McQueen made Persols famous–and famously slick—in The Thomas Crown Affair (he sported the 649 Ratti aviators); Daniel Craig wore them as a more brutish Bond in Casino Royale (models 2244-S and 2720-S); and Bill Murray hid those sad eyes behind them in both Lost in Translation and Broken Flowers.

Persol INCOGNITO, opening at the Whitney Museum tonight, takes a look at the history of the brand since its inception during WWI in Turin, Italy, using various media, including video installations and “interactive surfaces” (whatever that might be). Mostly, it’s product placement done well. Oh, and they got Lou Reed to perform at the opening—you know he appreciates good eyewear. (But is it the right eyewear?) At least they didn’t ask Bono.

The Whitney Museum of American Art is located at Madison Avenue and 75th Street, New York. Persol INCOGNITO is on view through June 28.