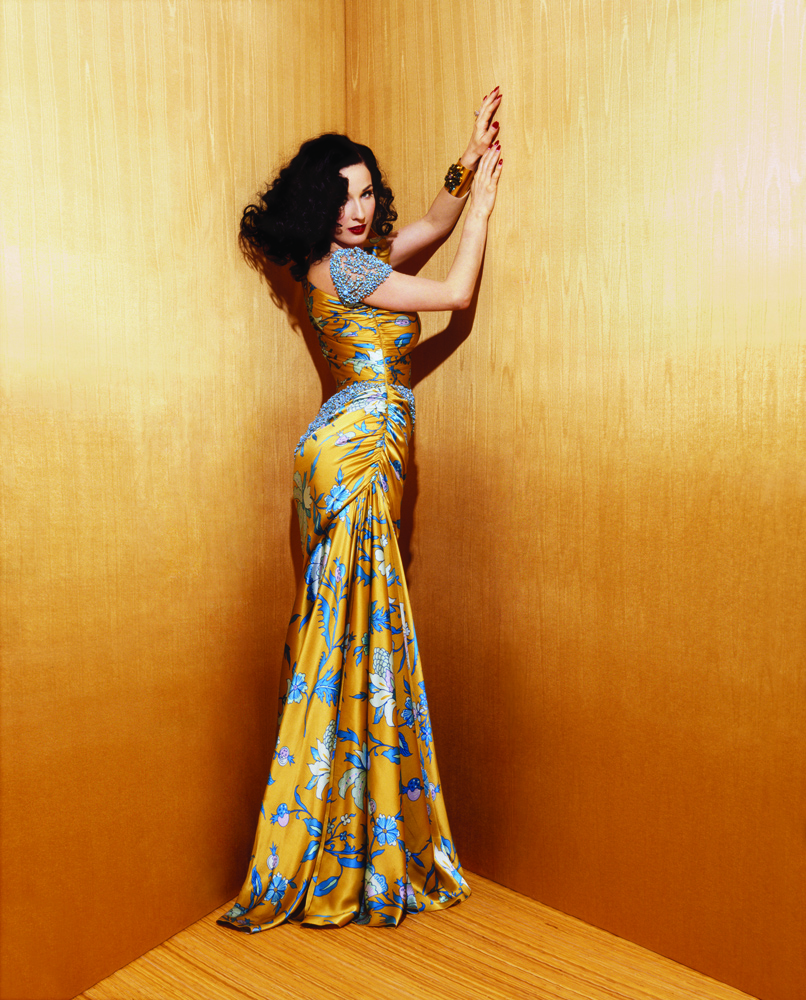 If anyone thought that Dita Von Teese was just a passing character upon the pop culture stage, they’d be advised to take a closer look. With celebrated and attention-grabbing acts, a new book, Burlesque and the Art of the Teese (Regan Books), due this spring, and a recent high-profile marriage to shock-rocker Marilyn Manson, this queen of burlesque is proving to be the sort of multifaceted player who is anything but a flash in the pan. Here, she grabs the attention of someone who knows a thing or two about the powers of seduction-Yves Saint Laurent creative director Stefano Pilati, who happened to have his own reasons for celebrating on the day they spoke.

Dita Von Teese: Happy birthday Stefano-I would jump out of a cake if I were there!

Stefano Pilati: I don’t know if I should be happy or depressed about turning 40. [laughs]

DVT: I think 40 is exciting-plus, you’re dashing, and that’s what matters most.

SP: So where are you?

DVT: I’m in London. Manson and I got married last weekend in Ireland. Our friend, the artist Gottfried Helnwein, has a castle there, which is where we had the wedding.

SP: [laughs] Did you have fun? Was it great?

DVT: I had the time of my life. I think we both did.

SP: What did you wear?

DVT: I wore a giant purple silk-and-grosgrain taffeta dress by Vivienne Westwood and a Mr. Pearl corset. I also wore a little tricorn hat from Stephen Jones. I didn’t want a white wedding or a Gothic wedding. It was somewhere in between-just beautiful, rich colors everywhere.

SP: Well, I’m so happy to have this opportunity to talk to you, because every time I’ve met you, it was always in situations where you couldn’t, or I couldn’t, really talk.

If I admire someone, I prefer to see them at their best. I don’t want to see a woman that I think of as glamorous in the grocery store wearing sweatpants and a ripped T-shirt.Dita Von Teese

DVT: And every time I see you all I want to do is tell you how crazy I am about what you’re doing at Yves Saint Laurent. I still have every look in my head from your last show! [both laugh] But I’m sure you hear that all the time-you must have women throwing themselves at your feet, telling you how much they love what you’re doing. Hip clothes and shoes and handbags can drive a woman wild. I think it’s even stronger than sex for some. [laughs]

SP: It’s stronger for me as well. [both laugh] One of the things that was so appealing to me when Interview asked me to do this was that they suggested the conversation be around beauty and the return of glamour. And I was like, well Dita is all of those things!

DVT: Oh, I try to be. I love glamour and artificial beauty. I love the idea of artifice and dressing up and makeup and hair.

I have had a lot of boyfriends who would get upset if I was too dressed up, because they felt like I was showing off. It’s nice to be surrounded by people who appreciate and encourage the way you dress. But a lot of people take it the wrong way. They think it’s vanity, and it’s not-it’s just something I get a lot of pleasure from, like a hobby.Dita Von Teese

SP: Making yourself more beautiful is what I try to do with my work. Fashion is my form of expression, and, somehow, I want to convey the idea that beauty and elegance is a positive thing that we should all embrace.

DVT: I feel like everyone’s trying to make things simpler, and I like things that are intricate and detailed and luxurious and fancy! [both laugh] I love all the details and fancy stuff.

SP: Yes, but without being too extravagant. Sometimes people hide themselves with extravagance and end up looking vulgar.

DVT: Yeah, but at least it’s amusing to look at. [both laugh] I would rather look at someone who has overdone it than someone who is wearing sweatpants and a T-shirt. I love when you see an old woman who’s been wearing her makeup and hair the same way for 40 years.

SP: Well, there are a few like that in Paris, I have to say. What is also very nice is that there are still women here who change to have tea with friends or to have dinner or who dress up in a certain way on Sunday morning-for me, it’s very sweet.

DVT: I can’t stand wearing the same clothes all day. It makes me insane. I like to dress for the afternoon and for dinner. It’s less for the occasion and more because I just like to change clothes.

DVT: Yeah, when I was a little girl I wanted to dress the way the stars did in movies from the ’30s and ’40s-especially ones that were set in the 1890s. The hair was just exaggerated versions of ’40s hairdos with big bonnets.

SP: Do you think that there’s a lack of beauty these days?

DVT: Living in California, I think there definitely is. People are in such a hurry and they don’t really know how to dress.

SP: They want to be comfortable.

DVT: I suppose. It’s nice to be comfortable, but I’d rather be uncomfortable. [both laugh]

SP: What was genius for me about the divas from the ’30s and ’40s was that they each had a look that reflected their personality and lifestyle. For me, people are really beautiful when they find a way to reflect who they are in the way they dress.

DVT: Yes, like Marlene Dietrich. She knew her own style and took risks and wore pants when people said it wasn’t glamorous and was a terrible thing for a woman to do. She had a signature style. Greta Garbo, too. They kind of embraced their own cliché and their persona, and I love that. Women love to dress up now, but I feel like there aren’t a lot of risk-takers. I really enjoy watching people like Madonna, or Cher, or Barbra Streisand on the red carpet. I want to see people wearing exciting things that are different and to know that they’re not just looking for the latest, most normal thing.

SP: Do you think that beauty is female or male?

DVT: I think it’s both, but of course, I love the exaggeration of feminine beauty. I also love the look of a dandy, though. Obviously-I just married one. I love seeing men like yourself who dress in beautiful suits. I’m very impressed by that sort of beauty. Physical beauty isn’t so impressive to me.

SP: Do you normally surround yourself with a lot of beautiful things?

DVT: Yes! [laughs] As best I can! I love things that are from the art deco period and the turn of the century. The things that I think are beautiful happen to be things that were made in a different time.

I feel like everyone’s trying to make things simpler, and I like things that are intricate and detailed and luxurious and fancy!Dita Von Teese

SP: Do you decorate your house by yourself?

DVT: I like some things about L.A. We’re sort of hidden out in L.A. and no one knows where we live. We used to live in a place that everyone knew about, and these fans of Manson’s were constantly coming by the house and ringing the bell, but now we’re in a secret place. I love to be in Paris every time I go there, though. That’s the only other city I could live in.

SP: Do you think there’s a more pronounced sense of beauty in Europe right now than there is in L.A. or New York City?

DVT: Yeah, I think so. You can see it in the people and the culture and the way of life. In L.A., I don’t go out to nightclubs and bars; I would rather go have tea or a nice champagne cocktail at a beautiful hotel bar. It seems like a more civilized, elegant way of living to me-I’m not really into the wild nightlife. L.A. is more about a party lifestyle, and I don’t really feel like I fit in. If I go out to a club, I wear a hat and gloves and maybe a corset, and people look at me because I’m not wearing a short Paris Hilton dress or a dress cut down to my navel.

SP: Do you think that beauty has to somehow be accessible?

DVT: I don’t think so. I like it when people seem slightly unapproachable or intimidating.

SP: I’ve always taken a lot of care about my look and all that, but that gave me a bit of a problem at times when I was younger. Today, obviously, I don’t care so much about what other people think.

DVT: I feel the same way. I’m 33 and, over the years, I have had a lot of boyfriends who would get upset if I was too dressed up, because they felt like I was showing off. It’s nice to be surrounded by people who appreciate and encourage the way you dress. But a lot of people take it the wrong way. They think it’s vanity, and it’s not-it’s just something I get a lot of pleasure from, like a hobby. [laughs]

SP: Don’t you think that it’s also a very generous gesture when you make that effort?

DVT: If I admire someone, I prefer to see them at their best. I don’t want to see a woman that I think of as glamorous in the grocery store wearing sweatpants and a ripped T-shirt. I think that it’s nice to live up to something and to show people that you’re the real deal.

SP: I remember when I was kid watching my two sisters putting their makeup on in the bathroom. I would sit on the side of the bathtub with my mouth open watching them transform themselves. Personally, I think it’s okay to apply lipstick at the dinner table as long as you have a really beautiful compact. It can be a whole seduction technique.

DVT: And it is. I think a lot of men love that.

DVT: We can go have champagne together and go out looking fabulous. We’ll get a horse and carriage to take us around Los Angeles, and put some plumes in the horses’ manes! We’ll teach them a lesson about how to get dressed up. [both laugh]