For over 50 years, the fashion designer Bob Mackie has worked tirelessly in service of glamour. As the costumer-in-residence for The Judy Garland Show, The Carol Burnett Show, and, perhaps, most legendarily, Cher, he pushed the boundaries of the censors and expanded America’s taste into glitzy zones traditionally off-limits to ready-to-wear designers. This Saturday, Mackie will be auctioning off over 200 sketches and outfits from his private collection at Julien’s Auctions in Los Angeles. And although he’s been quite busy creating costumes for the Broadway arrival of The Cher Show, he took time out to leaf through the auction catalogue with Interview’s Mel Ottenberg and Thom Bettridge.

MEL OTTENBERG: I’m so pissed I’m not in the market for any of these amazing looks from Cher because there are so many great items in the auction. I wonder if the Kardashians are going to buy everything, although some of these things are too colorful for them.

THOM BETTRIDGE: Something incredible to think about when you look at these costumes is that they were all made for one-off occasions. Did you improvise a lot of your decisions?

BOB MACKIE: It was such a panic to get Cher done every week. While I was doing that show, I was also doing The Carol Burnett Show in the next studio. We would start Monday like a race, and by Friday night everything was over. I had the best time.

MEL OTTENBERG: What lot were you on?

MACKIE: The CBS lot on Fairfax and Beverly. That’s the first lot I ever worked on in television for The Judy Garland Show in 1963. Sketch of Liza Minnelli and Judy Garland by Bob Mackie.

OTTENBERG: I’m dying to know about this sketch in your auction of Judy [Garland] and Liza [Minnelli]. Something about that just reminded me of how wild your job must have been—to fit these outfits and then wish for the best.

MACKIE: They took those outfits and went off and on tour, so that’s actually an iconic sketch. Judy was a handful, so when I finished that year of the show, I was ready for anything.

OTTENBERG: Have you seen A Star Is Born?

MACKIE: I’ve been a little busy. I saw the Barbra one.

OTTENBERG: What was it like working with Liza? She is my favorite.

MACKIE: Gosh, well, I’ve known Liza since she was a guest-star on her mother’s show in 1963—I think she was 18 years old. She was really, really young. She had long black hair, was very girly, and she wanted to be a star so badly. And, of course, it was all there. It was interesting to meet her that early on because nobody brought her up, really. She just hung around the studio and watched everybody. Before you knew it, she was a star.

BETTRIDGE: Did you ever make something in a pinch only to have Cher or Judy Garland refuse to wear it?

MACKIE: That’s why the sketch is so important, so you can show it to them and explain the idea in advance. We were pretty organized on my shows, so I don’t remember that ever happening. OTTENBERG: Was Cher one of those one-in-a-million people who just knows how to do the reveal and be at one with the clothes without any rehearsal?

MACKIE: Cher was the most amazing child. She was never uncomfortable in anything—she was very young, and she kind of just wore the clothes like you would a T-shirt and jeans.

OTTENBERG: I couldn’t believe that the look for the “I’m A Woman” thing with Raquel Welch was in the auction. That was the hottest thing I’d ever seen.

MACKIE: That was funny because you had two very different bodies, and yet they looked great standing next to each other. Raquel was much curvier than Cher—and I think she was a little nervous. She said, “Oh my god, is this too much? Do I look cheap? And I said, “No, darling, you look gorgeous.” 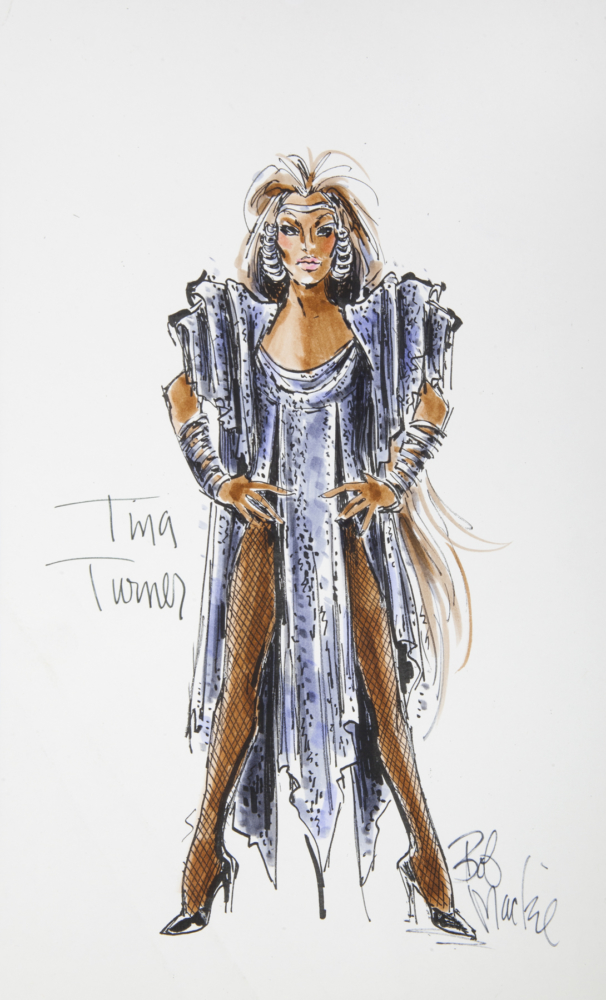 BETTRIDGE: Did you feel like being on television allowed you to go places where normal fashion designers weren’t really able to go?

MACKIE: With Cher, I just wanted to go places that would look good on her. The censors originally complained, but the network was like, “Leave them alone! We’re getting huge ratings.” There’s a whole number in The Cher Show about under-boob. A censor comes and says, “I can see her under-boob.” And the character playing me says, “Well, if she stands on her head, it would just be cleavage.”

OTTENBERG: You have to tell me about this one with Tina [Turner]. Was that a moment where you were in a rush and were like, “Okay, let’s just get these two black leotards and put some stuff on it”?

MACKIE: It always happened so fast. Tina and Cher had done a lot of different numbers together during that time—somehow, the two of them just clicked. It was an odd time for Tina, because she was leaving Ike and kind of hiding out. We didn’t quite know where she was living. I loved working with Tina! I did her last tour, which was a few years ago.

BETTRIDGE: Having worked with Cher so closely, what do you think made her able to wear anything?

MACKIE: She was an amazing performer with a great sense of timing. She came at a time when everyone thought you had to be blonde and big-booded to be pretty. But she was just so natural—nobody looked like her. Nobody could even figure out what ethnicity she was. BETTRIDGE: Tell me about this Elton John costume from 1986.

MACKIE: The one where he’s a devil? That was so much fun to do. Elton never gave me any hints of what he needed. He would just say, “Do me a costume.” And then I’d do ten sketches and he’d order them all. And he’d always want them in like two or three days. He had an angel costume in the same show with big wings—it was an angel and devil kind of situation. I did so many crazy things for him. He loved to get dressed up. The first time I worked for him was on a Cher special—with Bette Midler, Flip Wilson, and Cher. That show is fabulous to this day.

OTTENBERG: Some of the things you did were so influential, but also so dangerous. Did it bother you when you ended up on the “Worst Dressed” list? Those looks were the greatest thing ever, in my opinion.

MACKIE: The thing is that it was never, ever fashion. It was always costumes, so to me it didn’t matter. In the old days, Mr. Blackwell used to have a list of the worst dressed, and then of course every newspaper around the world would print it. It always made me laugh, because my mother would call and say, “That Blackwell put you on the list again!” It hurt her feelings, but it didn’t hurt mine.

BETTRIDGE: Did you try not to pay attention to the world of ready-to-wear?

MACKIE: When Cher first came on the air, I had friends in fashion who said that you could not sell a halter dress—that you couldn’t give one away. But all of a sudden, after Cher was wearing one every week, you had designers doing halter dresses all over the market. It’s still not something that’s good for everybody, but on her it looked amazing!