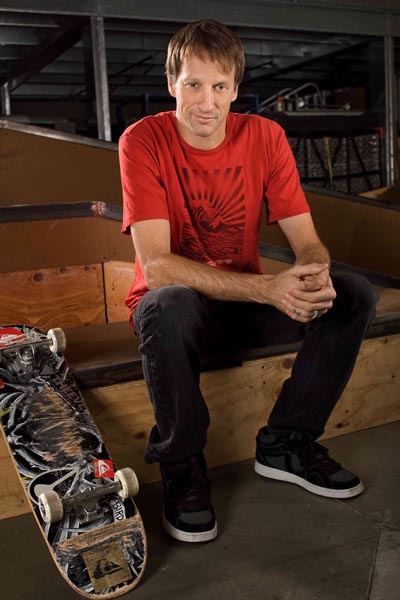 After three decades of tearing up halfpipes, Tony Hawk doesn’t need an introduction. But his latest video game, Tony Hawk: SHRED, out today, deserves a proper preamble. Fitted with a newly engineered board control (updated from last year’s Tony Hawk: RIDE) players get a chance to shred streets—and slopes, a first—from New Orleans to Beijing with a hard-charging soundtrack that’s pumping Surfer Blood and “Search and Destroy.”

“Kids are hyped on it. I mean, we had Al Roker playing it last week on The Today Show. He was actually pretty good,” jokes Hawk, who called in from Los Angeles to talk about the new game, the marketing of the sport, and who’s the next big gun on the horizon. Here’s a hint: they share the same last name.

SLENSKE: You know, I think I actually grew up riding your board.

SLENSKE: So tell me about this game. How long have you been working on it?

HAWK: I guess since we finished our last game, RIDE, which was August of last year. We’ve been really working on this one, trying to get the controls tighther and integration better, and so we feel like this is the game we’ve always wanted to do. My big idea for having a board controller was to use it for more than just skateboarding, and now we’ve implemented snowboarding into it.

SLENSKE: Are all the tricks ones you’ve landed in some way?

HAWK: No, not all of them. There’s a few that are a little more fantastical and more fun than in reality.

HAWK: Wow, that’s a good question. I think I like…well, there’s a snowboard trick where you go upside down and turn into a helicopter, so the board is spinning like a rotating blade.

SLENSKE: It sounds like the kind of thing you’d overhear of a bunch of skaters dreaming about.

HAWK: Yeah, there’s a lot of that. The cool thing is that if you don’t like the way something looks, you just take it out.

SLENSKE: So how exactly are you involved in the process of making the game?

HAWK: Well, I am playing it every step of the way, and fine-tuning it, and giving suggestions for locations, tricks, challenges. More it’s detail-oriented stuff just to keep the authenticity.

SLENSKE: The soundtrack is defintely great.

HAWK: That’s always been a great feature from our games, so we wanted to stay true to that and introducing different types of music to people but keeping it within the skate culture.

SLENSKE: You’re really a brand now—how do you approach the marketing of skateboarding?

HAWK: Well, for the most part it’s just about keeping it authentic and contemporary. Like with my skate brand, it’s not just about me, it’s about my team, and that kind of progression in different styles of skating; and not trying to present some other persona, like a huge marketing strategy, so to speak.

SLENSKE: Are you actually dealing with all those different branches of your business, like Digital Media and Events, firsthand?

HAWK: It depends on the project, but I always have final say. It’s more like, if I’m working with a big company and they send me an ad, I’ll say yes or no or change this or change that. So it’s not like I’ve spawned that advertisement—I just have to make it mine.

SLENSKE: How do you think skateboarding has changed since you started out?

HAWK: It’s different in the sense that it’s more accepted and embraced by a bigger audience. I don’t think the sort of vibe of skating or the reasons people do it are any different, but the skating itself has definitely changed. The sheer physical element of skating has changed, because it’s so much more advanced and there are so many more techniques and options. It’s extremely difficult when you get to a professional level to get recognized, because there’s so much competition.

SLENSKE: What got you into skating?

HAWK: My older brother was doing it and some of the kids in my neighborhood were doing a bit, so I started doing it.

SLENSKE: So what was your first vivid memory of being on a board?

HAWK: I just asked my brother if I could try his board, and I went down the alley with it and was yelling back at him, “How do I turn?”

HAWK: I got to the end of the alley and hit the wall and then turned the board around physically and went back the other way. [LAUGHS]

SLENSKE: A lot’s changed since then, I guess.

HAWK: Yeah, I can turn now.

SLENSKE: What are you doing with your skating?

HAWK: I stopped competing a while ago. I skate as much as ever, but mostly it’s on tours and exhibitions and things. I’m going to Australia in a couple weeks to do some exhibitions in Sydney.

SLENSKE: I remember reading a few stories a couple years ago about a lot of middle age guys having trouble getting back into skating as 40 year-olds. Do you ever worry about the day when you won’t be able to skate anymore?

HAWK: I don’t really worry about, but I know I’ll get to that point. And I feel like my skills are fading, I certainly won’t be doing it on public level, but I’ll keep skating even if it’s not in front of a crowd. But I know that for the people that are getting back into it and they’re a little older… [LAUGHS] That’s a tough thing to just jump back into for sure. The fact that I’ve never stopped doing it is what’s allowed me to continue doing it at my age.

SLENSKE: What do you think might be the cutoff?

SLENSKE: Who are some young skaters coming up who you like?

HAWK: In ramp skating there’s this guy Alex Perelson who’s really coming into his own and doing some amazing new stuff we haven’t seen before. Just different types of spin. He landed a 900 recently. He’s a relatively new guy, and he’s the fourth person to ever make one. There’s a whole slew of amazing street skaters. Some of the guys on our team—Shawn Hale, Aaron Homoki—my son Riley has really been coming into his own lately.

HAWK: Yeah, he competes in the top amateur events.

SLENSKE: So do you think he’ll take it as far as you have?

HAWK: I don’t know, he definitely has potential.

SLENSKE: Does he play the game with you?

HAWK: Not really, he doesn’t play many video games these days. He’s just off skating all the time.