“Now I Give a Fuck”: SZA Talks to Céline Semaan About Spirituality and Sustainability 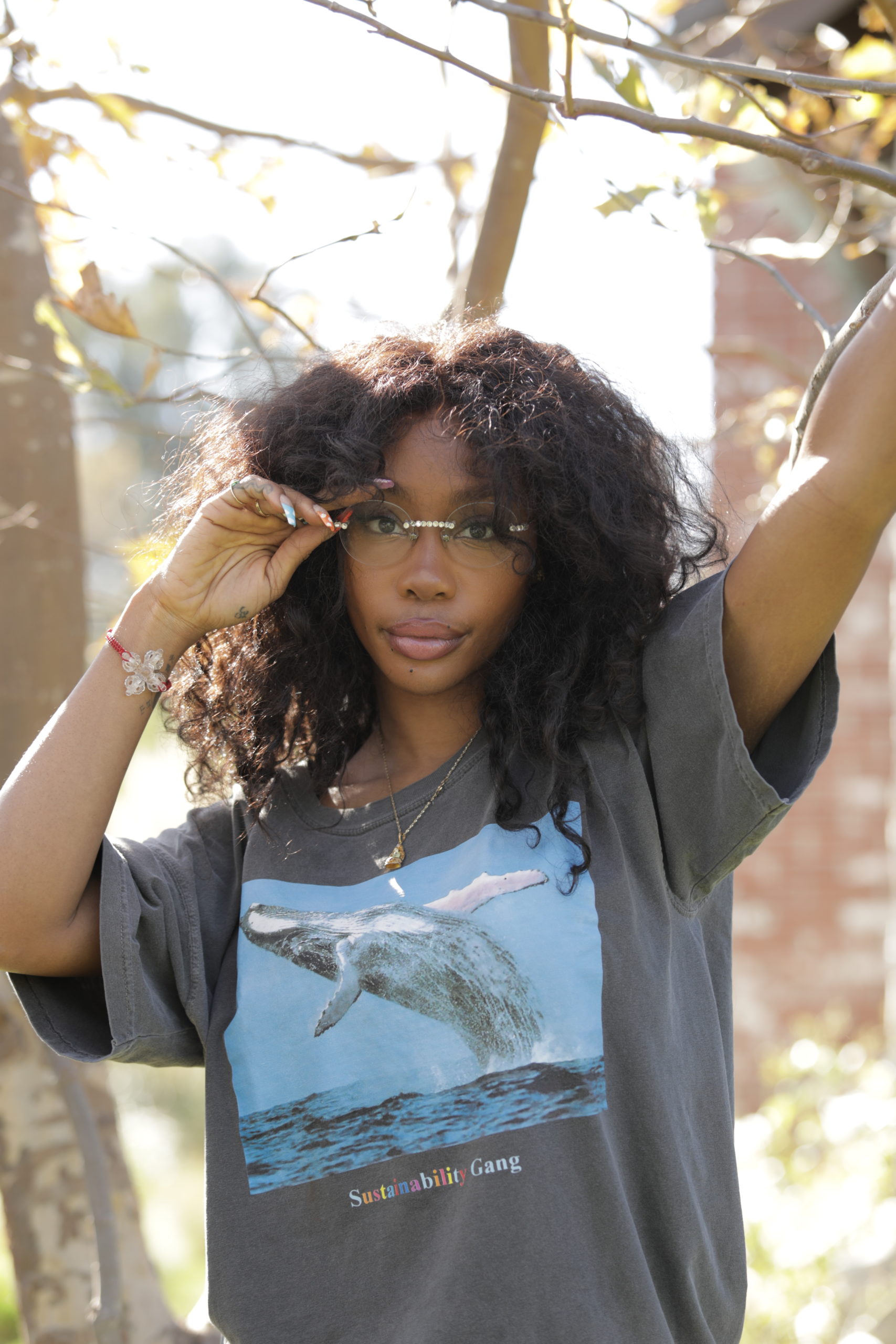 Sometimes, someone slides into your DMs and it happens to be SZA, whose new hit single, “Good Days,” continues to climb its way to the top of the global charts. While the chances of this happening are slim for most of us, it was a real-life scenario for Céline Semaan, the Lebanese-Canadian researcher, designer, public speaker, and entrepreneur. Semaan has been at the forefront of the sustainability movement in fashion and working in open education for almost a decade. With her non-profit, Slow Factory Foundation, she has been unapologetically advocating for systemic change at the intersection of environmental and social justice, developing a devout following eager to learn—among them the R&B chanteuse. A few weeks before the launch of Slow Factory’s second semester of their free, equity-centered education program, SZA and Semaan went from DM to IRL (well, sort of), when they met over Zoom for a conversation about sustainability, spirituality, and how to get through it when you’re going through it.

CÉLINE SEMAAN: I’m good, how are you?

SZA: It’s so good to meet you! I’m just getting my hair done, but I am 100 percent present.

SEMAAN: So good to meet you too.

SZA: So the things that pop up on my [Instagram] Explore page, it’s like bitches, science, booty, then randomly social justice, but only the realest of the real environmental and social justice. I’m really into sustainability so I think that’s probably what my algorithm is geared to. It’s the most abrasive of the most honest of the real deal and that’s how I see you, as no bullshit, just “Do you want to learn today or not?’” energy. I’m grateful that I found you.

SEMAAN: I’m so grateful to have found you long ago before you found me. I’m always behind the scenes doing research work at Slow Factory, so for me to be able to talk to you is so fun. You said that you just started your journey in sustainability, environmental justice, and social justice. How did that come to be?

SZA: The deeper I got into my spirituality, you understand all the elements are highly connected. I used to spray [roaches with] Raid and just not think twice about it, but if spraying this damages the nervous system of something microscopically smaller than me, then it probably is harming my nervous system at the same time, but in a smaller way. Learning about what really happens with recycling, and that people really do toss things in a landfill, it doesn’t go anywhere. It’s just there, forever. It’s just very chaotic and it made me hyper-conscious. I was a Girl Scout—as an adult I have spent even more time in nature than I ever did as a child, and it just makes you pay attention. I lived in Carson [California] and I’ve been a victim of environmental racism. I’ve driven through Torrence and Compton and I’ve seen on my way to Long Beach the sky is literally fucked up and all you see is factories and all the trees are dead on that side of the street. I just see what it really does and I know what cumulative not giving a fuck can do to a person, a community, the environment, all of it. So now I give a fuck.

SEMAAN: I love that your journey started with spirituality because now sustainability is used by a lot of brands, and it’s becoming something people want to buy into instead of something that really starts from a spiritual understanding of our footprint on this planet. I grew up in Beirut and witnessed the war, the cost it had on the country from an environmental perspective, from a human rights perspective. They are two sides of the same coin. You can’t just be environmental without looking at the cost that it has on human rights or social justice. When you work in the environment, you work with a lot of fear, pain, anger, mourning. We mourn a lot, so you really have to have a spiritual practice that allows you to find your way back to where you’re at. There’s a lot of pain that comes with the new information. How do you deal with that?

SZA: I feel like it’s a lot of guilt. The most prevalent emotion is guilt because there’s a lot of responsibility and emotion. I try not to project it onto other people. Because a lot of people cannot afford to do better and don’t have access. I take it upon myself to try to not be lazy, I have to for everybody who can’t. Getting through it comes from action—attempting to share information all the time, or going to seminars and learning what small grassroots organizations are doing.

SEMAAN: The problem is that the guilt falls on the shoulders of the people, the public. At Slow Factory, we try to redistribute the responsibility back on the shoulders of the CEOs and the CFOs of these massive conglomerates that aren’t taking any responsibility. At the end of the day, they’ve got to do better, make better products, and care about the life cycle of these products. It’s [hard] balancing the contradictions between sustainability and guilt. There’s no such thing as doing something perfectly. Perfection is imposed through white colonialism and white supremacy. What do you think?

SZA: I honestly am listening and learning at the same time. It’s so funny because when I think of excellence and hyper-perfection, I don’t think of white people. I think of African students and Asian-American children whose parents are not fucking playing. I definitely think yes, white perfectionism is a disease, but I also feel like the human ego is a disease and a pitfall.

SEMAAN: Growing up as immigrant kids, we had so much pressure upon ourselves. Our parents demanded perfection. There was no room for mistakes. But the mistakes are made by white men. All of the political destabilizations exist because there’s exploitation.

SEMAAN: Absolutely. You’re right, the ones who have the hardest marketing are the ones that are advocating, pushing their way into solving and creating a change. When we do want to create change, we have to allow ourselves trial and error. There needs to be a way for us to experiment. SZA: There needs to be a margin and unfortunately we don’t really have one. But thankfully because no one else is really trying, this is a great time to try and fail. And if we just so happen to fix it before white people, it’ll just be another plus.

SZA: I’m really interested to hear what you do to ground yourself because you take it on in crazy ways.

Semaan: But you do too because living in the public is hard. Whenever I go in front of the public or talk about things anywhere, it’s a big responsibility. So I see you, and I know especially as a Scorpio sister, sometimes…

SZA: Yes! Wow. The amount of honesty that you are dishing out into the world, it makes sense that you’re a Scorpio. Super clear.

SEMAAN: [Laughs] What do you do? I know you meditate. Do you pray?

SZA: I stretch more than anything. I do pray a lot. I love to pray. Sometimes it’s in exasperation, sometimes in gratitude. I’ve been doing a lot more gratitude prayers lately. I went to Australia right before all this happened and we got to hold koalas right before an entire ecosystem collapsed before our very eyes. I try to just have gratitude for the stuff I have witnessed and try to preserve whatever I can. SEMAAN: Me too, I am praying a lot more in gratitude. Now after this year, having spent a lot of time with ourselves, it was like a forced spiritual awakening, if you will.

SZA: Yeah, definitely. I’ve never spent this much time by myself. I lost my mind for a brief period… a large period, but there was so much self-realization.

SEMAAN: The distractions were off so then you’ve got to deal with what’s going on. I have two kids and I watch them deal with this pandemic. I see them also go inward and emerge. My five-year-old is like, “The earth is god, in case you didn’t know this.”

SEMAAN: I know! I’m like, “Tell me more, how did you figure that one?”

SZA: That’s the sole reason I want to have children, so I can practice some spiritual code and just ask them as much as I can before the age of 7.

SEMAAN: I know, right? It’s so natural to them. They’re just so in tune. I feel like your new song, “Good Days,” is such a spiritual song.

SZA: Thank you! That song, well all the stuff on this project… I’m just trying to feel something. I don’t get to play my music in a room full of other people, which helps me feel, so I was just making my own feeling. Part of me wishes I was grounded more or able to discharge some of the tension or friction better. I’m still figuring it out.

SEMAAN: I’m still figuring it out too. I have no idea what I’m doing, but it’s all just improvisation.

SZA: How did you solidify yourself in the world of sustainability while also not being agreeable? How did you maintain respect by major corporations and outlets, while also being a real ass bitch?

SEMAAN: Ahh, that’s a good question. I always say I’m a professional troublemaker. At first everyone around me was like, “Céline, you’re too much, you’ve got to tone it down.” After a while the truth started to resonate. My biggest luxury is that I kept my integrity, and I know it’s not easy to say no to money or to contracts. I did Slow Factory on the side for maybe six years, I would work night and day. I said no to so many brands. I can’t even say their names, because I don’t want to shame them, but I do say no. It’s a slow road, that’s why it’s called Slow Factory. This is what I’m going to do for the next 30 years of my life. I’m 10 years in, but I have a long breath of patience and stamina. I want to ask you—you’re very close to the public, you’re like the people’s princess in a way. How do you balance between being in the eye of the public but also being so close to people?

SZA: I’ve spent most of my life being really unpopular and nerdy in school. I’ve always been super empathetic. My main goal is to make everybody feel included. I witnessed what exclusion gets everybody and the whole thing about being cool. It hurt my feelings as a kid, and as a grown-ass woman, I still hate that. Most of the people that work with me right now are fans that I’ve met online. I want to make sure people know: I definitely give a fuck that you like me. I’m very much in shock that you like me. I just want to involve you so you can know that you’re important as hell and I just want to solve the important shit together. I’d rather interact with as many real human beings as I can and accumulate as much genuine love and interaction if nothing else. That’s really my driving force.

SEMAAN: I love that. Yes. And that’s how we ended up talking here.

SZA: I know! At first, I was intimidated, but I’m grateful.

SEMAAN: I was also scared. I’m like “Shit. What am I going to ask?”

SZA: Anything. I would have told you anything. Dsquared2 Is Thinking About The Future of Our Planet