For Stefanos Tsitsipas, Tennis Greatness is Only A Matter of Time The number of Greek tennis players ranked in the top 10 in the men’s Open Era: one. That single entry was delivered this year thanks to the 20-year-old wunderkind Stefanos Tsitsipas. The handsome, lithe, long-locked Athenian isn’t a surprise to sports insiders; he was the number-one ranked junior player as recently as 2016. But as the cracks start to show in the once-indomitable Zeus-like Big Three—Novak Djokovic, Roger Federer, and Rafael Nadal—Tsitsipas has swooped in with his wild-swinging all-court game. Last August, at the Rogers Cup, he managed to pull off a victory against a very hot Djokovic; at the Australian Open earlier this year, he fought past super-veteran Federer. And this past May in Madrid, he conquered the King of Clay, Nadal. For Tsitsipas, it is no longer a matter of if, but when.

In a sense, Tsitsipas’s career seemed destined from birth. Both his mother and his father were tennis pros and instructors. (His father is his coach and his younger brother, Petros, is a regular in his entourage on tour.) When asked if he has ever felt the urge to rebel against the family sport, Tsitsipas says, “It’s hard to believe that any player hasn’t felt this way. But at the end of the day, tennis has made my life and fulfilled my dreams. It’s a great distraction for me from all my problems.”

Even with the pressure of the sport, and the millions of dollars riding on it, Tsitsipas manages to make it all seem so much fun. That’s thanks in part to the ongoing YouTube vlog that he’s been running for the past couple of years. He films, edits, and produces the series, in which he takes his 145,000 subscribers behind the scenes at the major and satellite tournaments, into his various hotel rooms, and even on days at the beach.

Now that Tsitsipas has cracked the top 10, his big goal for 2019 is to make it to a Grand Slam final. Even with his family by his side and a video camera recording his days, the road to tennis stardom can be a little lonely. Tsitsipas admits that his young Next Gen colleagues tend to think of him as more of a competitor than a friend. But the audacious Greek did pick up a little wooden neck chain pendant that serves as a piece of good luck. “I bought this last year when I was on vacation in the British Virgin Islands,” he says of the totem, which is carved in the shape of a face. “For some reason I gave him a name. I decided to name him Julius. He’s my partner in crime. He travels the world with me. It may sound crazy, but I feel like I have a friend on my chest—someone I can trust.” 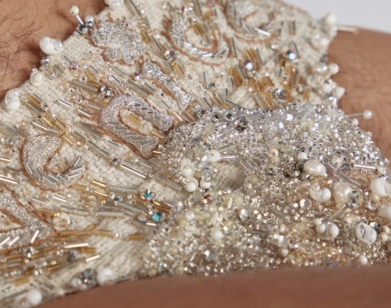