Samantha Hanratty on the set of Yellowjackets. It’s rare to see a teen drama earn that coveted 100% Rotten Tomatoes score, but Yellowjackets— the new Showtime series that’s somehow reminiscent of both The Heathers and Alive—has managed the feat. The show follows the members of a high school girls’ soccer team who are forced to confront nature, and themselves, when their plane crashes somewhere in the Ontario wilderness. What unfolds is a bloody, twisted exploration of intimate relationships and social hierarchy that traces the descent of a group of teenage girls—played by Samantha Hanratty, Sophie Nélisse, and Jasmin Savoy Brown—into cannibalistic madness. As the team navigates their precarious situation, viewers are simultaneously propelled into the present day, where their adult selves—played by Christina Ricci, Juliette Lewis, Melanie Lynskey, and Tawny Cypress— attempt unpack the resulting trauma.

The pilot episode of Yellowjackets, which premiered this week, was directed by the Jennifer’s Body filmmaker Karyn Kusama, boasts a ’90s-era soundtrack that’s equal parts sinister and nostalgic, and is jam packed with industry veterans. Two of them are Samantha Hanratty and Christina Ricci, who together make up the teenage and adult version of the bumbling, eager-to-please character Misty. Both Hanratty, 26, and Ricci, 41, began acting before the age of 1o—against the wishes of their parents. But, as their IMDb pages demonstrate, it was worth the struggle: Hanratty is known for her breakout role as the conniving Kassidi Gallagher in Shameless, while Ricci has long since established herself as a horror movie cult figure. Unsurprisingly, when the pair joined forces to bring Misty to life, they created a character brimming nuance and laced with psychopathy. To mark this week’s Yellowjackets premiere, Interview reunited the pair for a conversation about goth prom looks, the toll of getting into—and out of—character, and surviving in the wilderness.

SAMANTHA HANRATTY: How old were you when you started acting?

CHRISTINA RICCI: I was seven. How old were you?

HANRATTY: Six years old when I started. I wanted to start when I was two, but my parents wouldn’t let me.

RICCI: How did you know what acting was at two?

HANRATTY: I just knew I wanted to entertain. I’m the youngest of five girls and I probably wanted the spotlight, but I told my parents, “I want to be on TV like Shirley Temple,” and my mom finally gave in when I turned six. I kept begging and then she finally sent my picture to an agency and they called the next week. I had an audition for a commercial and booked it, and it just was meant to be. My mom is still waiting for me to leave it behind. She supports me, but she also says, “Whenever you want to stop, go ahead and stop.”

RICCI: Mine’s a little bit different. My mother started modeling when she was a teenager for Seventeen Magazine and all those. She had a very negative view of industries like ours because of how she was treated. I’m the youngest of four, and each of my siblings has been approached to become a child actor. She always said, “No way.” By the time it was my turn, I was in this school play and somebody came up to her and said I should do commercials. You know the whole thing. You read well, you’re very small, and you look two even though you’re six. That’s their dream. My mom said no, and then my brothers and sisters bullied her into letting me decide. I would have done anything to make my brothers and sisters happy, so I was like “Sure, it sounds great.”

HANRATTY: I love that both of our moms were like, “No.” That’s not the most common thing you hear in this industry.

RICCI: Once I started working,  my mom actually really liked it, because she liked traveling and living in hotels and all that. We were both like, “Oh, this is pretty good actually.”

HANRATTY: Pretty nice life, sometimes! How did you come to be a part of Yellowjackets?

RICCI: I learned about the show a year before it was even greenlit. At the time, I sort of described myself as, like, a murderous golden retriever. Being small and innocuous-looking, people always assume you’re harmless. But actually, I just want to kill everybody. So I think that’s why they thought of me for Misty. How did it happen for you?

HANRATTY: I originally auditioned for Natalie. I read the script and was like, “This is so cool.” Natalie has a totally different vibe from Misty, so they emailed back saying, “No not gonna happen, but we might keep you in mind.” When I got the audition for Misty, they put me through the wringer. I went in five times. The auditions were really intense, each time I found myself sobbing. It was a really heavy piece.

RICCI: Wow. Did they make you read stuff that didn’t end up in the script?

HANRATTY: Yeah, it was a full manipulation scene, where I was bawling and crying to a teacher, and then at the end, I get my way and stop crying completely. That type of deal.

RICCI: Did you ever read with any of the other girls?

HANRATTY: No, I met everybody at the table read.

RICCI: I think you were the first person I met during hair and makeup.

HANRATTY: We were talking about the wigs and everything.

RICCI: And how much I hated tattoos. You were like, “Oh great, I have like four of them.”

HANRATTY: I have 11 tattoos.

HANRATTY: I remember telling you, the first day I met you, what a big fan I was of Gold Diggers growing up. I gave you this long backstory and you were like “Okay, great.” It was pretty funny. But once we got into the swing of things, it was very exciting. We got down for a year and a half.

RICCI: This project was so interesting, because it’s like we were on two different shows. You did all your scenes with the younger cast, and I was with the older cast. For me, that’s brand new and strange.

HANRATTY: I imagined that we would all be on a soundstage together, even though we were in different scenes.

RICCI: I never got to see you guys because you were always in the woods.

HANRATTY: Did you ever see the set in the woods?

HANRATTY: It was pretty intense. I think they kept the plane there because there’s a paintball place nearby and they wanted to use it.

RICCI: So, what was our process for developing Misty, would you say?

HANRATTY: We both had a similar diagnosis of Misty before we even started collaborating. We both have that same love for characters like this. 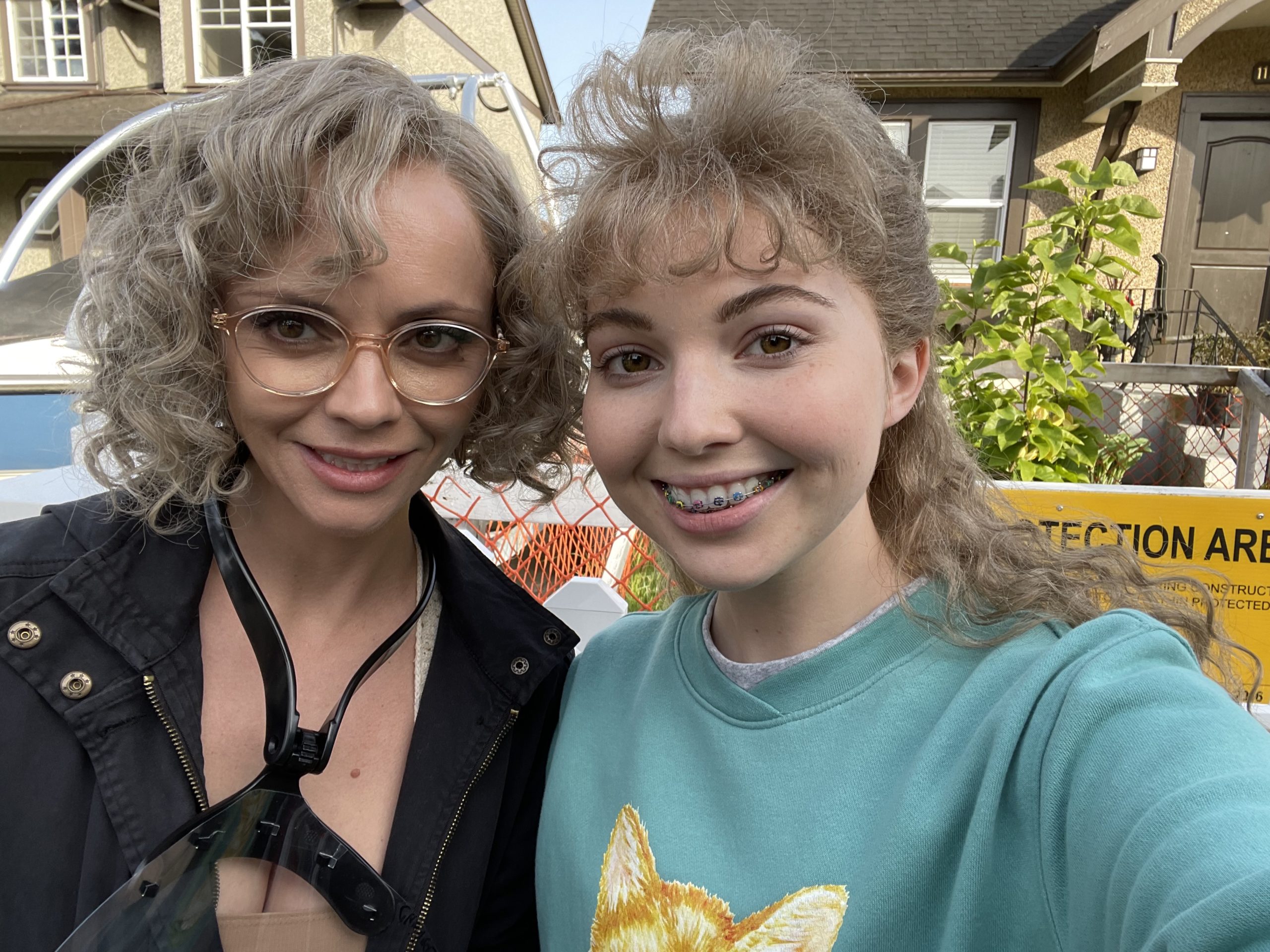 RICCI: I found that the second I put the wig and glasses on, people actually treated me differently. Did you find that?

RICCI: I was dismissed, teased more. It was really fascinating.

HANRATTY: I don’t think we’ve talked about this, but I was seeing a therapist while I was in Canada, and that was something that we discussed. I was definitely treated differently when I was in hair and makeup and wardrobe.

RICCI: It was fascinating. I wanted to take it all off and be like, “No, you will not talk to me like that anymore.”

HANRATTY:I got more self-conscious, and my walk even changed a bit. I just felt like a bigger target, you know, as a person.

RICCI: It made me angrier. I know we talked about how we were going to play Misty differently—I would use a lot of passive aggression, and you would channel the rage that comes from 40 years of being dismissed.  What are your favorite parts of our experience playing the same character?

HANRATTY: I’m just lucky that I got to work with you. You have the empathy and compassion needed to play a character like this—you’re not judging her.

RICCI: I feel the same way about you, I totally lucked out. Do you think that you would have survived 19 months in the wilderness?

HANRATTY: I’d like to think so, but I’m vegan and allergic to everything.

RICCI: If you were stranded in the woods and starving to death, would you break being vegan?

HANRATTY: If it’s about survival. I’m not mad at other animals who do it—I would never look at a tiger and be like, “Don’t eat that gazelle.”

HANRATTY: The bigger problem is that I’m allergic to everything, and I don’t think the wilderness does gluten-free. Unless I have a foraging book with me, I don’t think I would make it. What about you? I feel like you’d kill it.

RICCI: I think that’s right. I’m very scrappy and nothing makes me sick. I can withstand quite a lot of intolerable things, and I watch a lot of Naked and Afraid, so.

HANRATTY: I love Naked and Afraid and Survivor.

RICCI: So, we have the tools.

HANRATTY: I would be the person who gets bitten by that one deadly bug and die. Then you could eat me.

RICCI: I would take care of you. What were you like in high school?

HANRATTY: I was homeschooled, so it’s so hard to know who I was. I mean, all my sisters were cheerleaders, so part of me feels like I would have been that girl. I was constantly wanting to connect with people. I really love people. Part of me knows that if I’d gotten the tiniest bit of bullying, I would have crumbled. I think I would have just been an anxious peppy person in high school. What about you?

RICCI: I would work and then come back to school. It was a traditional high school—there were the stoners, the preps, the blue crew, which were the jocks. I was one of those people that floated in and out of groups. I did that on purpose because I really didn’t like belonging.

HANRATTY: I feel like I’m similar. When I look at my group of friends nowadays. I have some that are actors, and others that I’ve met doing activist work. I like to mix and mingle with everybody.

RICCI: Did you go to prom?

HANRATTY: I went to two proms.

RICCI: What was your style?

HANRATTY: I wore this hand-me-down dress from my sister’s prom—a blue spaghetti strap dress. I was so excited about it.

RICCI: I went to this preppy fancy private school prom as an albino goth.

HANRATTY: Shut up. I love it.

RICCI: The pictures are hilarious, because everybody’s taking it really seriously, and then you see me just standing there

HANRATTY: Oh my god, you have to send me pictures. We would have been friends in high school.