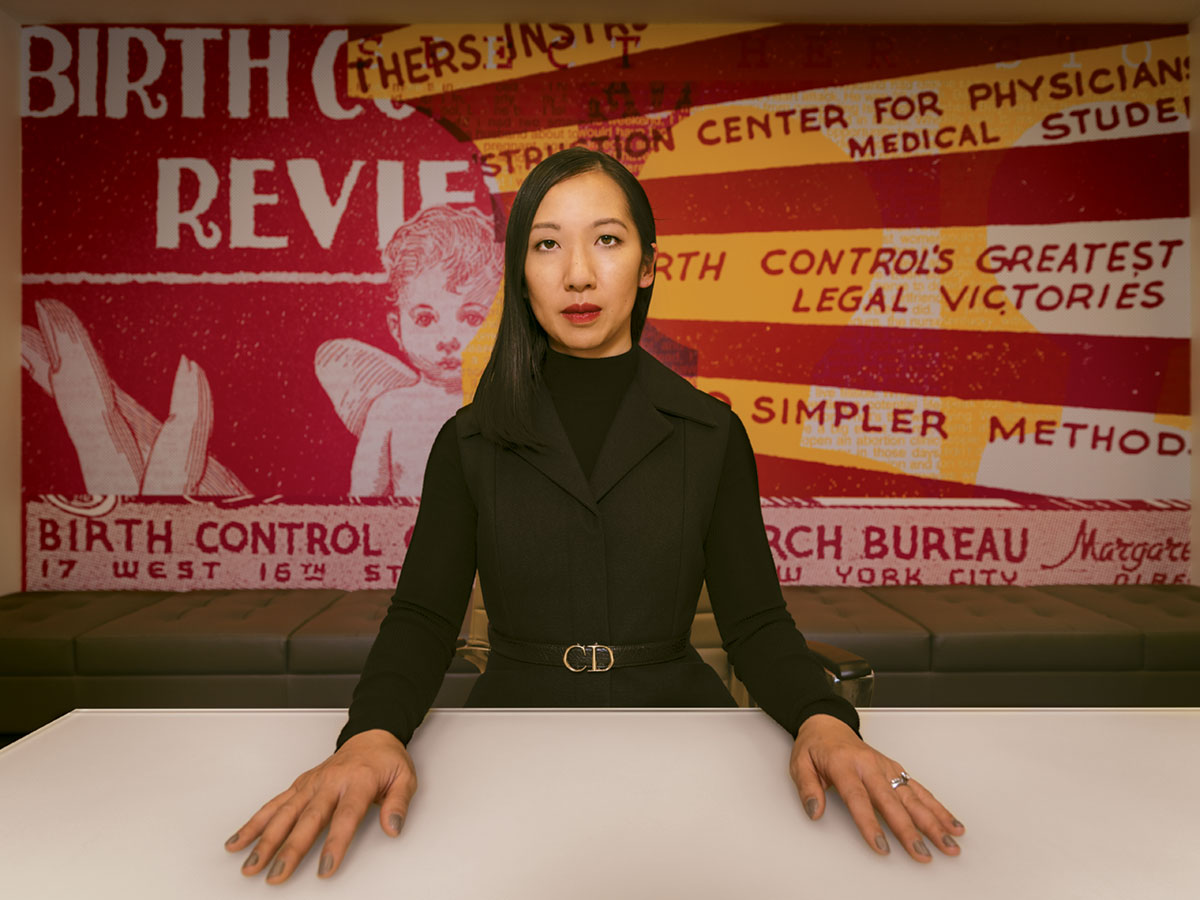 Vest and Belt by Dior. Top by The Row.

For the first time in 50 years, the Supreme Court has been overtaken by a conservative majority, posing a threat to the future of reproductive rights in America. If Roe v. Wade gets overturned, one in three women of reproductive age could be living in states where abortion is not only banned, but criminalized. Amid a political climate that has become increasingly hostile to women, the Planned Parenthood Federation of America stands as a leader of the resistance — one of the largest providers of reproductive health services in the country and a safe haven for those seeking safe, accessible healthcare. Planned Parenthood’s newly appointed president, Dr. Leana Wen, has a long medical career that includes, among many other acts of courage, treating victims of the 2013 Boston Marathon bombing. Prior to her position at Planned Parenthood, Wen served as the health commissioner of Baltimore, where she was belovedly known as “the Doctor for the City.” Not long after moving into her new Manhattan headquarters, she caught up with fellow women’s rights advocate and mother Chelsea Clinton, who had this to say about Wen: “One in five American women have, at some point during their lifetime, gone to Planned Parenthood for care, advice, or counseling. It is therefore not hyperbolic to say that most people in our country — either themselves, a family member, a friend, or a colleague whom they respect — have benefited directly from the breadth of what the organization provides. The discussion surrounding women’s health is not a discussion about something that happens to other people in other places. This is a part of the fabric of our country, and is why our country needs champions of equitable, safe, and accessible healthcare like Dr. Leana Wen.”

CHELSEA CLINTON: First, could you tell me a bit about your first months on the job?

DR. LEANA WEN: There have already been a number of people who have come up to me on the street with their own Planned Parenthood stories. And it’s also my story. When we first immigrated to the U.S., my mother was a patient of Planned Parenthood. She couldn’t get healthcare anywhere else. We depended on Medicaid, food stamps, and Planned Parenthood. When I wanted information on birth control, I knew Planned Parenthood was a place I could go to get judgment-free education. For so many of our patients, it’s their only source of healthcare.

CLINTON: And we’re currently in an existential moment.

WEN: There is a lot of work ahead of us. On one hand, we had a great outcome in this midterm election. We now have a record number of women in Congress, with amazing wins such as Laura Kelly in Kansas. But we are still facing the fight of our lives. There are over 20 cases that are one step away from the Supreme Court that deal directly with abortion access and reproductive rights. I’m deeply concerned that, within the next year, we could face a situation where Roe v. Wade could be overturned or further eroded. And if that’s the case, then one in three women of reproductive age — 25 million women — could be living in states where abortion is banned, criminalized, and outlawed. None of these threats have anything do with medicine or science. It has everything to do with power, with denying women bodily autonomy. We shouldn’t just be playing defense, we should be going on the offense.

CLINTON: When I was on a panel recently with Cecile [Richards], I said how much I wish that my grandmother — my mom’s mom — had been able to go to a Planned Parenthood. She had unwed teenage parents who abandoned her multiple times throughout her life. She had to start working to support herself before her 14th birthday. She was aware that there was something deeply unjust about her situation, dealing with questions of menstruation and reproductive healthcare without somewhere to go. Of course, when I shared this, the anti-choice movement translated it as saying I wished my grandmother had aborted my mother. Which is, of course, not what I said and not what I meant. It was my first, and hardly my last, experience with the bad faith in which the anti-choice movement operates. How do you stay focused on science, equity, health, and human rights, while also recognizing that many of the people you will now have to engage with come from such a different place?

WEN: If only I knew the answer to that question. When I started in medical school in St. Louis in 2001, a group of us wanted to start a local chapter of Medical Students for Choice. We were told that we could belong to the chapter, but we needed to provide reproductive options education — meaning that for every pro-reproductive health, pro-science lecture that we gave, we also had to give a lecture on something that was not based on science, or evidence, at all.

CLINTON: That is shocking.

CLINTON: First and foremost, it’s about our safety. We know what happens when abortion is illegal. It’s not that women stop having them.

WEN: You and I are both data people. So let’s talk numbers: One in four women in America will have an abortion in her lifetime. An abortion is a normal, common experience that we need to talk about. It’s one of the safest medical procedures, and working as a doctor, I have seen women choose to have an abortion under all kinds of circumstances. I remember having a patient who found out, when she was 19 weeks pregnant, that she was carrying twins who would never develop their diaphragms and their lungs. If she had carried them to term, her twins would have suffocated upon birth. I’m a relatively new mother myself, and I know you’ve got two little ones. When I was pregnant, I was treating a patient who was pregnant and had a desired pregnancy, but was diagnosed with metastatic cancer. She was faced with the extremely difficult, heart-wrenching choice to terminate her pregnancy or potentially miss the window for chemotherapy, leaving her other children without a mother. My job as a doctor is not to judge my patients. My job is to provide the information, education, and services for my patients to make the best decision for themselves and their bodies. My job is to trust my patients and to trust women.

CLINTON:  I wonder how much of a disservice we have done by so often talking about abortion in euphemistic terms. Do you think we’re moving to a place with more appropriate medical language and data?

CLINTON: I refuse to refer to the anti-choice movement as anything other than anti-choice.

CLINTON: And yet, they often exist as separate and distinct in our omnipresent debates over reproductive healthcare choices.

WEN: I love that so many of our patients’ stories sound like this: “I came in for X, and not only did I get X, I got Y, Z, A, B, C, D, and E.” I just heard about this patient who came in because she wanted birth control, but our nurse also found out that she was a victim of domestic violence. She received birth control, but also counseling, and she was connected immediately to a safe place she could stay that night with her children.

CLINTON: As a healthcare system, we fail women. It happens in every hospital. It takes longer to diagnose a woman with heart disease. We have obscenely high maternal mortality rates in our country — especially among minority and immigrant populations, which are largely women of color. Outside of Planned Parenthood, how can you make your former colleagues and med school classmates feel like this is their fight, too? Not that you need more on your plate.

WEN: The data is staggering. The rate of maternal mortality is higher than it was 25 years ago. An African-American woman today is almost four times more likely to die in childbirth and 40 percent more likely to die from breast cancer than a white woman. The disparities are shocking, and we’re moving further away from health equity. We need to move women’s healthcare into the mainstream, but we also need to recognize that mainstream isn’t what it’s cracked up to be. We should not be the thermometer. We should be the thermostat. We should be approaching healthcare from a social justice lens, valuing each person and their choice. Only then can all people be free and equal.

CLINTON: Amen to that. Why Is Anyone Still Making Magazines In 2019?