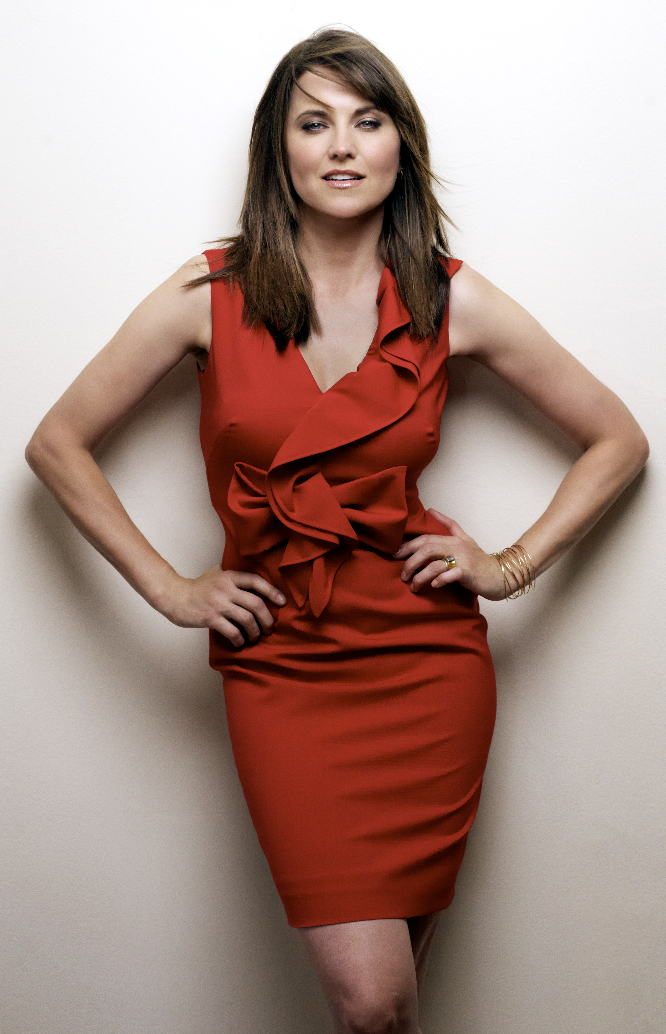 It would be difficult to overstate the cultural impact of Lucy Lawless over the years. How many other actresses can claim to have inspired a dwarf planet, or an experimental line of military uniforms? At only 44, Lawless boasts a curriculum vitae that would surely make even Ph.D. seeker James Franco blush—she’s a proud mother of three, an impassioned environmental activist, ally to the LGBT community, a musician who has played sold-out performances in New York and LA, a speaker of four languages, and perhaps most famously, a Warrior Princess.

Her itinerary this fall? Comedy. Ever versatile, Lawless guest-stars this fall on the NBC hit Parks and Recreation as Ron Swanson (Nick Offerman)’s love interest. “It’s so funny,” Offerman said to the Huffington Post. “We realized that the world of popular culture had been creating the perfect candidate for many years: the female champion of the universe.” Though the role may initially seem to be an odd fit for the New Zealand native, Lawless is no stranger to exercising her wit, having begun her onscreen career as a sketch comic in the New Zealand show Funny Business. Since then, she’s tickled plenty of funny bones on The Simpsons, Two and a Half Men, and Curb Your Enthusiasm. “There were many episodes of Xena that were pure slapstick,” Lawless laughs. “Bruce Campbell, who plays Autolycus, we did a lot of kooky stuff with him.”

Of the many things accounted for in Lawless’ daily schedule, sleep surely isn’t one of them. Her work as a Greenpeace ambassador recently cost her court time—she and five other volunteers climbed up to the top of an oilrig bound for offshore drilling, and were promptly arrested. “Have to go face the judge,” she remarks wincingly. As if that weren’t enough to manage, she’s back in school, pursuing a degree in philosophy, and loving every minute of it. “If I could hide in academia for three years, I’d do that,” she says with a smile.

Lawless spoke to us in Los Angeles en route to New Zealand (“It’s right next to New York in the dictionary,” she smirks), and we talked Parks and Recreation, unintentionally offending Ted Danson, life after Xena, and the relationship between her activism work and newfound interest in philosophy.

JOHN TAYLOR: So, Lucy, I hear that you’re going to be on Parks & Recreation this fall…

TAYLOR: Are you excited about it?

LAWLESS: Yes, I really am. I’ve seen every single episode. Nick Offerman said to me in the makeup room, “I assume you haven’t watched every single episode, so—” And I said, “I probably have, actually.” I’m an enormous fan. It was just lovely of them to invite me. And that Amy Poehler, oh my God! Legendary. One of the best work environments in Hollywood.

LAWLESS: The funniest thing happened the first day. Nick Offerman—he’s a lovely gentleman—but this Freudian slip came out where he said, “I’m relieved to see you’re not as humongous as I thought you were going to be.” [laughs] And then he compounded the problem, saying, “No, no, no. You’re a nice size.” I’m never going to let him live that one down. I guess he thought I was going to be a scary Amazon woman, that I might emasculate Ron Swanson. [laughs] As if that were possible.

TAYLOR: Of course it’s possible! If anyone could put Ron Swanson in his place, surely it’s you.

LAWLESS: I don’t think that’s where it’s going. Because of his first two wives, you might expect [my character] to be somewhat in that mold, but she’s not. So I’m quite excited to not play a Xena type character—it’s probably closer to me than any character I’ve ever played.

LAWLESS: Do you mean by genre stuff? Or by the “tough woman” business? I do look at that philosophically. Like, “I should be so lucky to have that problem.” Because branding is quite an important thing. As an artist, you want to be able to explore facets of yourself. The roles that I’m proudest of, actually, are the ones where I get to be a stain on the wall—just as the person I was on [Flight of the Conchords]. There, I played… I can’t even remember her name now.

TAYLOR: You played Paula, Assistant to the Prime Minister of New Zealand—I hardly recognized you there.

LAWLESS: That’s right. Those are the kinds of roles I like to play—I like to play women who are not strong at all, because, there’s certainly plenty of myself that is no kind of a warrior. I really thought that I’d be doing Shakespeare, honest to God. I did not foresee the whole action television thing. That was God’s joke.

TAYLOR: Do you enjoy doing comedy? I loved that episode of Curb Your Enthusiasm that you’re in, where you called Ted Danson an asshole. That was amazing.

LAWLESS: [laughs] That was my ad-lib. [Ted] didn’t hear it, and Larry [David] made a point of watching that episode, when it aired, live with [Ted]. He was really troubled by it. I heard from a friend, it had to be explained to [Ted] that the only reason I said that was not because I really think he’s an asshole, but because nobody thinks he’s an asshole! That’s comedy. Like, how perverse of Larry to want go over and watch Ted’s face. [laughs] That’s awesome. Larry’s so pithy.

LAWLESS: That’s not how it works, John.

TAYLOR: [laughs] You’ll have to forgive me, Lucy, I’m a young person. I’m still learning how this works.

LAWLESS: [laughs] I keep having these bros come up to me and say, “I used to watch you when I was a fetus,” and I just want to kill them. I’ve gone back to university, you know? I’m playing hooky at the moment because of Parks & Recreation, but I’m studying philosophy part-time, so I’ve got a lot of new friends who are 18. And they’re really fun!

TAYLOR: Who are you reading right now?

LAWLESS: We’re doing Confucius, Aristotle, St. Augustine… I’m really impressed with [St. Augustine]. I love the way he’s like, “God, you’re so awesome. All happiness resides in you. How come I love fucking people so much?” [laughs] He was so honest, you know.

TAYLOR: Is it odd, being in school with younger people?

LAWLESS: Somebody asked me, “Do people treat you different?” And, I’m not there to be treated in any way. I’m there to obtain knowledge. It’s irrelevant to me if other people know who I am. I’m just, I’m really happy. It calms me down, too. If you’re on top of an oilrig, fighting with politicians, or whatever—you need a bit of wisdom to realize that you’re not always right, or that you’re not always being reasonable, or you’re not always listening.

TAYLOR: So where are you headed with all of this? Perhaps I’m speaking with the future “Professor Lawless.”

LAWLESS: [laughs] No. I became very interested [in philosophy] after attending the U.N. Conference on sustainable development in Brazil. I see all these politicians and all these [non-governmental organizations] tearing their hair out. Everybody’s trying to do the right thing, and yet—they’re sort of on a collision course, policy-wise. I’m very concerned about climate change and the world reaching a tipping point. And, I see other people who really just want to survive to make it to the next election, rather than making means of change. Where I’m going with all of this is it made me ask, what is a just society? Because, all of these people feel justified. So what is justice?

TAYLOR: Now that you’ve been taking classes for some time, what would you say is the most important thing you’ve learned thus far from your return to university?

LAWLESS: Not only is every door in the university opening up a whole world of inquiry, and color, and experience, it opens up doors within doors within yourself. When I [first] went to university, I was doing foreign languages, because I had done them since I was 13 years old. I had done French and German. I picked up Italian, just sort of blasted through the exams, [and then] took off overseas, because I wanted to be an actor. I thought, “I’m just not academic.” I’m not very competitive, in terms of acting. But since going back to university, I’ve realized, I am highly competitive. Like, super ambitious. [laughs] This is really new for me. It’s not gonna be okay for me to get a B.

TAYLOR: That sounds very much like something Xena herself might say. I’ve always wondered, did you let your children watch the show when they were younger?

LAWLESS: Well, Daisy [Lawless] could, my boys were too young. And they’re not interested. You know, I might as well work in a bank, for all they care. [laughs] Children are so egocentric—they want to watch their lives, and not yours. You’re supposed to revolve around them, and that’s, I guess, as it should be. I don’t watch my stuff, actually. I don’t think I’ve seen an episode of Xena, Warrior Princess in 15 years.

TAYLOR: Do you ever feel like you’re playing different characters, or roles, in certain situations? Say whether you’re protesting with Greenpeace, spending time with your family, or taking notes in class?

LAWLESS: I don’t. But it’s taken me a lot of years to peel away my own layers, I suppose. That tough thing we were talking about before—I was raised with so many brothers that you had to be tough, but maybe it made me too tough. It’s taken me a long time to just drop that shit, you know? [pauses] Now you know too much about me.

LAWLESS: Did you really just ask that?

TAYLOR: Stock question. I’m supposed to learn everything about you, remember?

LUCY LAWLESS GUEST-STARS IN SEASON FIVE OF PARKS AND RECREATION, WHICH PREMIERES TONIGHT ON NBC AT 10 PM EST.