If you caught last year’s lockdown thriller Songbird, you might have noticed something different about its star, K.J. Apa. Since 2017, when he was a mostly unknown actor from Auckland, New Zealand, he has risen to become one of the most identifiable faces—and heads—in Hollywood. As Archie Andrews on the CW’s noir-ish teen soap Riverdale, Apa has, over the course of the show’s last four seasons, been dying his hair a bright copper red to match the beloved comic book character on which his performance is based. It’s become so entwined with the way people perceive him off-camera that when he made Songbird at the outset of the pandemic (it was the first movie to shoot in Los Angeles under COVID-19 guidelines), his shaggy brown locks and week-old stubble were a reminder, to him and us, that Apa is more than the role he plays on one of television’s most popular shows. As he tells his Songbird costar Demi Moore, it reminded him that he’s a person, too.

DEMI MOORE: I’ll go easy on you. Tell me where you are.

APA: I’m in Vancouver. I just touched down yesterday for my quarantine before we shoot the second half of season five of Riverdale. It’s a little daunting, but I’m grateful to be working during this crazy time.

MOORE: It’s interesting, because the two of us have been on the maiden voyage. Part of why I wanted to do Songbird was because we were the guinea pigs, getting out there and seeing if we could make this work, and if other people could work as a result of it.

APA: I don’t know how it was for you, but I remember thinking the movie was either going to be really good or really bad, because of the condition of the world and how we were forced to shoot during COVID. You and all these amazing people were attached, and I was like, “Fuck it. Let’s try.”

MOORE: I had no idea what I was getting into. It wasn’t a huge role, but it wasn’t really about that. It was about the adventure.

APA: I felt so free coming from a show where I feel like I’m in jail a lot of the time. There are so many restrictions on what I can and can’t do. With this character, it was like, “Wow, this is what it’s like to really express myself in a natural way.” I wasn’t covered in makeup or hair products. I had long hair and a beard. I just felt free. Jacket and Pants by Bottega Veneta. Bracelet and Ring (worn throughout) K.J.’s Own.

MOORE: I can see how playing a character that’s based on a comic book would come with a specific framework.

APA: There’s been so much pressure in playing Archie. I’m so grateful for the show and its success, but at the same time, there’s a lot of baggage that comes with that success. I feel like the only people I can talk to about my issues are my costars, the people who can really relate to me. Cole [Sprouse, who plays Jughead Jones] is an amazing person to have on set, because he’s been doing this his whole life. I try and look at it from a fan’s perspective to understand the way they think. But there are times when I’m like, “Wow, they really have no idea that we are actual people. They can’t separate us from our characters.” You don’t have that in other professions. You don’t dissect the life of a builder and start judging the decisions he makes in his life with his wife and kids. As an actor, I will be judged on everything: my political opinions, my opinions on drugs, my opinions on the people I want to be with. Everything. It’s something I’ve had to come to terms with.

MOORE: We’re living in a time of social media that has amplified everything you just described to an overwhelming degree. You’re responsible for a character that people have an investment in, and being able to separate who you are from who that character is, knowing they can exist separately and simultaneously, is not easy.

APA: Having Luke [Perry] on the show was such a blessing for me. When I was first experiencing success, Luke had a way of just quashing it and being like, “You’re only as important as the PA sitting over there.” He knew everyone’s name. Sometimes people talk about our job as this really important thing, like no one else can do it. Luke had the ability to be like, “Step on your mark. Stay in line. Go home. Show up on time. Treat people with respect.” I loved that about him.

MOORE: What you’re describing is humility. I’ve seen people get incredible success and then lose sight of being able to appreciate it. Sometimes it takes people having to lose everything to really value what they have. What Luke was trying to impart to you was that it takes all of us to make it happen, and in the end, nothing is that big of a deal. I’ve been thinking about some of our connective tissue. We both started out on soap operas.

APA: What soap opera were you on?

MOORE: I started on a soap called General Hospital way back in the day. I was fully faking it till I made it. I had no clue what I was doing. Shirt and Pants by Bottega Veneta. Socks by Off White c/o Virgil Abloh.

APA: How did you end up getting on the show?

MOORE: I met a young actress who I thought was the most incredible creature I had ever met. Her name is Nastassja Kinski. She spoke English well, but she didn’t read it well, and we both lived in an apartment building in West Hollywood with our single mothers. She was so self-possessed, so comfortable in her own skin. I was like, “I don’t know what you have, but I want it.” She was pursuing acting and I thought, “What do I have to lose?” And so off I went to figure out how to fucking make it work. But the soap opera was not where I wanted to be. It was just a starting-off point. How about you?

APA: I was 16 when I started on a soap called Shortland Street. I had no idea what I was doing but I became a machine at learning lines, which came in handy because they shoot 25 scenes a day. It gave me the technical training that I needed. I felt like you did, in that I didn’t really want to stay there. I didn’t want to stay in New Zealand, full stop. There’s this thing in New Zealand called Tall Poppy Syndrome, where if you stand out, if you want to do anything too big or you dress weird, people give you shit and try to cut you down. I remember going to L.A. for the first time and being like, “Holy shit. This is what it’s like to be in a place where you can dress how you want. No one cares if you’re gay or straight.” In New Zealand, it’s hard to be yourself if you’re not confident enough.

APA: I taped an audition for a movie that got a bit of traction in L.A. My parents let me take some time off from school, so I went over there, did some auditions, got some representation, and booked my first movie called A Dog’s Purpose. After that, things just started happening.

MOORE: How old were you?

APA: I got Riverdale when I was 18. I almost don’t remember who that guy was. I was so naïve. I hadn’t even had a drink yet.

MOORE: At 18, you shouldn’t know anything. You’re still a baby. It’s a lot to experience such a huge change, coming from a country with a particular culture.

APA: The hardest part was not being with my mom and dad. As I get older, I’m trying to be less career-driven so it doesn’t consume my life. Every time I get a hiatus, it’s like, “Do I shoot a movie or do I spend time with my family?” When I’m older, I want to be able to be proud of the decisions that I’ve made now. APA: But some decisions that bring you joy in the present might not always be healthy for you.

MOORE: It depends on how you define joy.

APA: How do you define it?

MOORE: I think learning the difference between seeking from the outside in, versus the inside out, doing things that are loving and not about an external achievement. The way I have generally always looked at it is that the outside things are amazing and there’s nothing wrong with achieving goals and having external successes. All of that is wonderful, but it should be secondary. The first thing that has to happen is doing things that are self-supporting in a way that makes us feel good about who we are.

APA: And not feeling selfish for it. I’m trying to get better at doing things for myself first. I feel like I need to do things all the time for other people. I’m trying to learn that if I’m not really being kind to myself, then I’m not going to be able to help the people who really love me.

MOORE: If you don’t put your own oxygen mask on first, then you can’t help somebody else with theirs. There’s a difference between being self-serving and being self-caring.

MOORE: Where is home for you at this point?

APA: Deep in my heart, my home is in New Zealand. But when people ask me nonchalantly, I usually say L.A. That’s my sanctuary right now. My place of rest.

MOORE: Are you by the water?

APA: I’m in the hills, but thinking about it now, it’s really not home. When I’m there, I still feel a sense of loneliness. My home is where my family is.

MOORE: So much of what’s out in the world are people’s interpretations of you. If we really knew you, K.J., what would we know?

APA: You would know that I stand by every big decision I’ve made in my life. Shirt, Sweater, and Shorts by Dior Men. Socks K.J.’s Own.

MOORE: What would you be afraid for me to know about you?

APA: That even though I’m proud of the decisions I’ve made, I do struggle. Sometimes I find myself struggling to be alone with myself.

MOORE: That’s a beautiful answer. If you really knew me, the real Demi, you would know that I’m afraid I’m not good enough.

APA: And what would you be afraid of me knowing?

MOORE: No, seriously, I have a collection of normal items that are oversized, and I am never without a toy of some kind in my purse. The reason is that when I look in my purse and see a weird miniature toy or stuffed animal, I remember not to take life too seriously.

APA: If that’s something that keeps a smile on your face, then that’s fucking amazing. 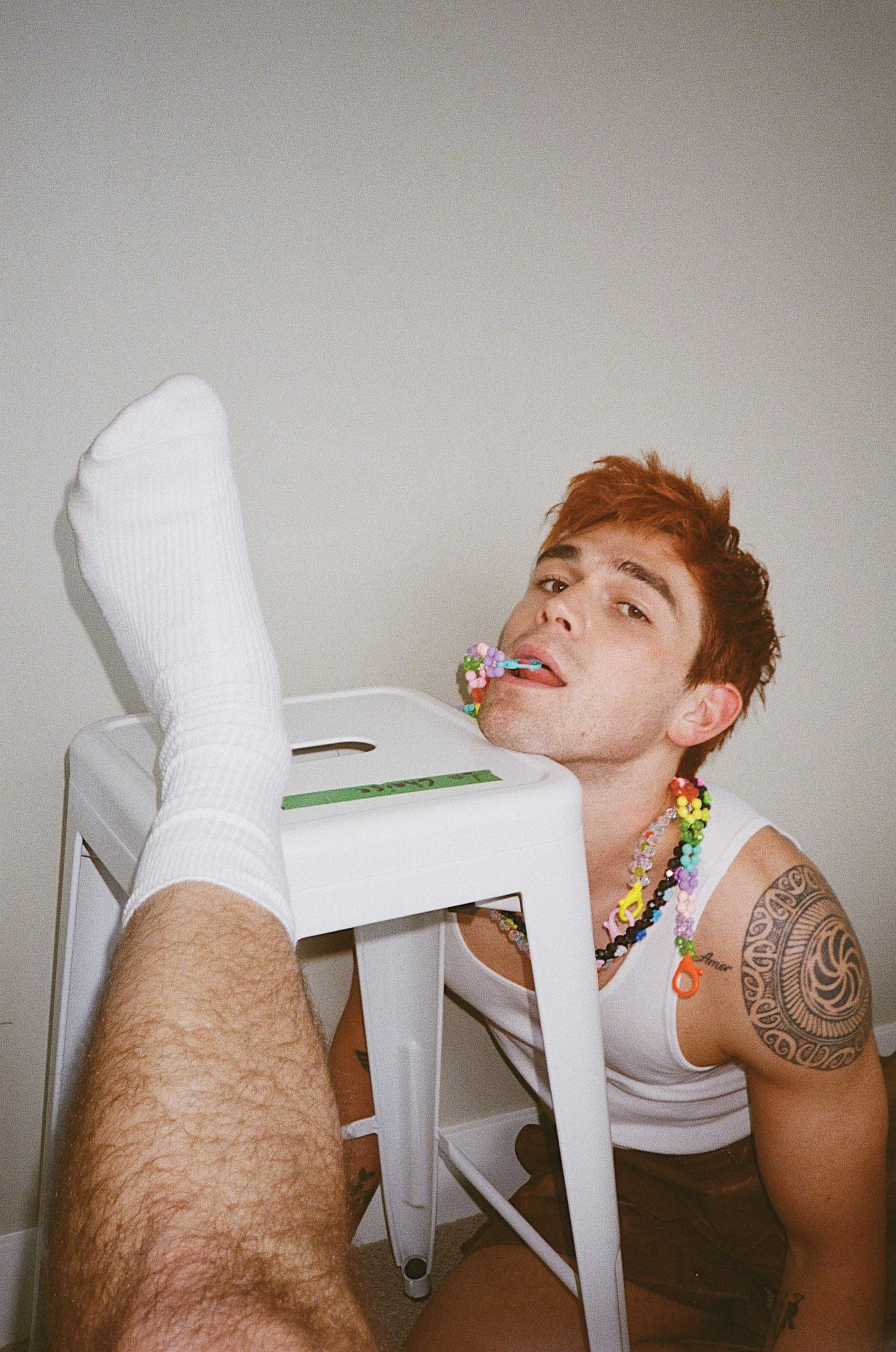 Vest and Shorts by Gucci. Peter Schlesinger Documents a Yemen That No Longer Exists