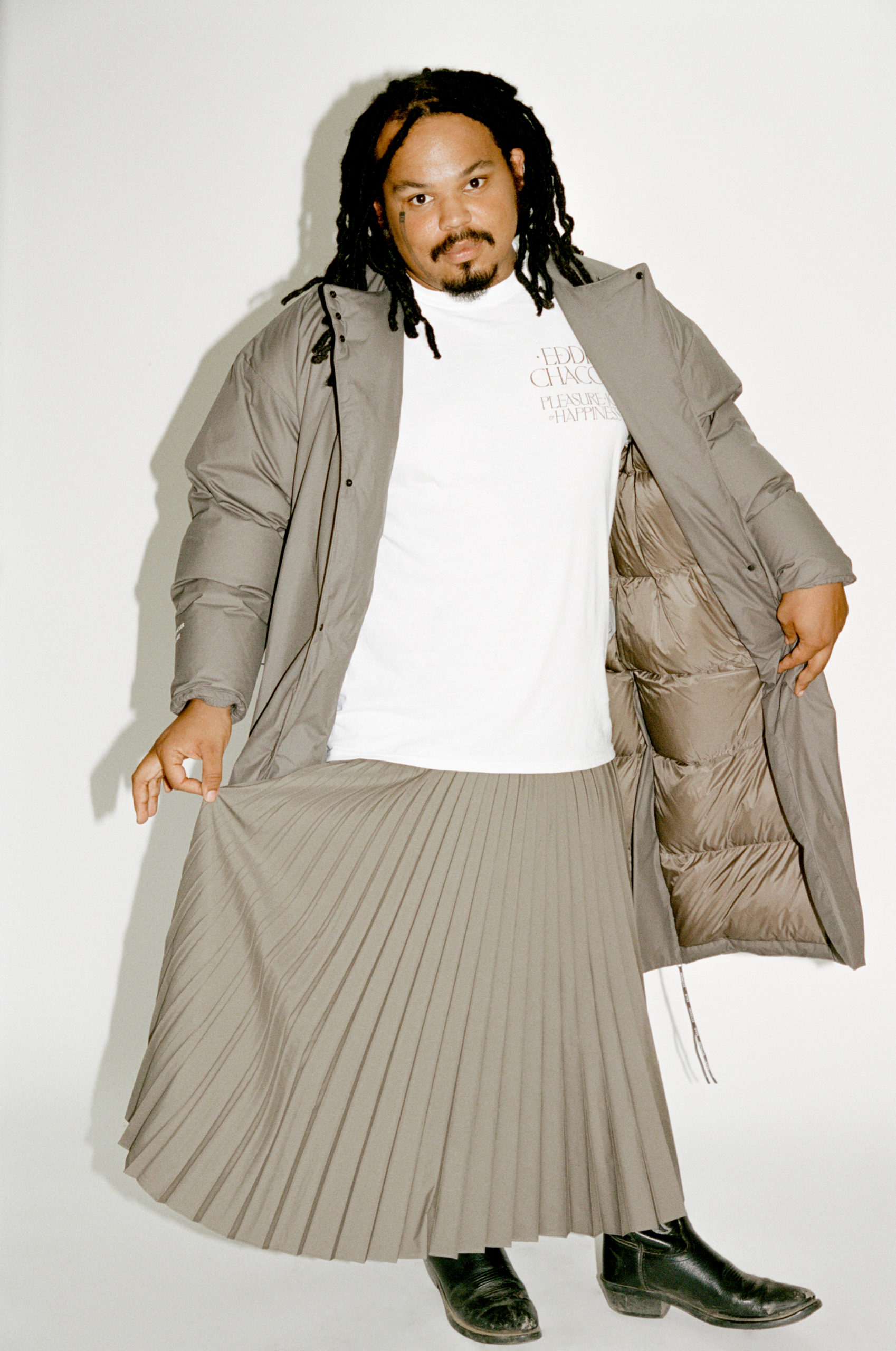 Trench Coat and Dress by 4 Moncler Hyke. T-shirt and Boots Kerwin’s Own.

Kerwin Frost doesn’t need an invitation. Whether it’s on the streets of SoHo where he forged his reputation as a streetwear scamp, or the Kardashian Khristmas rager where, dressed as Santa, he ambushed guests with his trademark interview style, the Harlem-born entrepreneur has hustled his way to hosting an annual film festival, an Apple Music radio show, and Kerwin Frost Talks, his popular YouTube talk show. Next up, he’ll bring his ludicrous (in a good way) style to Adidas, for a multi-year partnership with the brand. But first, he goes off on 14 topics chosen sort of, but not really, at random.

“When I got the pencil, the only people who had face tattoos that were notable were Gucci Mane and killers. Now, it’s a different time. It’s not as intense. Face tattoos only had negative connotations, so I wanted to bend that a little bit.”

“You kind of just had to be there. It was a mecca for figuring out what you wanted to do. I needed a venue for the first Spaghetti Boys show I did. I had zero dollars, and I was like, ‘I’m going to find a venue, I just need to walk around SoHo. I’ll run into somebody.’ I ran into Frank from Frank’s Chop Shop, and he was like, ‘I’ve got a spot.’ It was that easy. You could find whatever you were looking for. That’s just what SoHo was.”

“They’re the middleman. I guess they’re tight. I don’t know. I haven’t worked with them long enough to figure that out yet.”

“I went there once to the Yeezy office. It was nice. Kanye is the only person who put on for Calabasas by making those burgundy Adidas track pants. That was the first time anyone had seen it get used as a flex. And then Drake slid in.”

“I shot a video from inside one of their parties. You’re seeing what the inside of that world is like. I watched it the other day and was like, ‘How the fuck did I get away with this?’ You should watch it.”

THE LINE AT SUPREME

“I don’t know what it’s like today, but I was there in the early 2010s. It’s been a while since I bought any Supreme. It was a way smaller community. You listened to the same type of music, the same kind of rappers. Even if they were halfway good, it was like, they’re part of our community, so let’s cherish them. Resale culture is at its pinnacle right now, so it’s probably just full of families.”

“We need to find a new word. Clout exists in every single field. It exists in a fucking accounting office. It’s just popularity.” “You’ve got to go in there and decide what you’re looking for. People go there just for vintage, but I’ll go in there and look for a nice baggy suit. The experience is ruined when you’re just looking for old rap tees or some shit.”

“I would love to attend the Met Gala. Are you kidding? I would go to the moon with my outfit. And then I would get on my hands and knees and just be thankful to be in such an amazing place. Hopefully one day.”

“Back in 2016, I bought a boatload of her old merch, and at the time the shirts were $150. But then I fucked up and started wearing them all, and a lot of people caught wind of that, and it became its own sector of streetwear. Now a shirt of hers will go for $1,000, and you cannot get your hands on one.”

“As we grow older, we’re trained to feel guilty about eating anything that’s not healthy. It’s taken the fun out of those places. But In-N-Out is just whatever.”

“Self-expression is great, it doesn’t matter what scene you’re in. If I’m ever having a bad day, I’ll put on something that will make me laugh. Top hats are really funny to me so I always feel happy in one. Top hats are hilarious.”

“That’s a scam. If you’re your own boss, you have to go ten times harder. I work from as soon as I open my eyes until midnight. Me and my wife work in our home office and are literally in there all day knocking things out. I don’t live that in- fluencer lifestyle where I have a team that’s tak- ing care of it and I’m just cruising. When I work on a project, I’m 110 percent in on every single detail. I’ve never done something where I just got to watch it come together.”

“I’m the king of it. I’m the loudest, proudest zad of my own work. I won’t let you not know it happened. There’s something I love about owning your name, and owning what you worked on, because in so many pockets of this industry, the cooler you get, the more mysterious, vague, and modest you have to be about your work. But I’m like, ‘No, you’re fucking sick. You did that. Stand on it.’”

“When you become a dad, you really want to talk about being a dad. Anyone you talk to kind of fake listens, and eventually, there’s just too much to say about it. So when they ask about your kids, you’re just like, ‘They’re good.’ I always wondered why I would get that when I was asking people about being a dad. And now I fully get it.” Sweater, Pants, and Bag by Loewe.