Kathy Griffin rose to fame mocking the rich and ridiculous, but in 2017, when she posed with a fake bloodied head of then-president Donald Trump, her career came to a grinding halt. The comedian, best known for her reality show Kathy Griffin: My Life on the D-List and cohosting CNN’s New Year’s Eve Live alongside Anderson Cooper, lost everything, becoming one of the first casualties of cancel culture. As she fought for her livelihood, Griffin was diagnosed with lung cancer. Today, the 61-year-old is cancer free and living large in Malibu, where she went off on TMZ, megachurches, and shady men.

“You can tell who’s on what list based on the seating at the Golden Globes. It was very clear that the movie stars who didn’t do TV were in the front. The Jack Nicholsons or Mel Gibsons. Even if you’re a Ray Romano, who can probably buy and sell most movie stars, nope. You still can’t be in that front row. Get back.”

“They were always on the D-list with me, and sometimes if I’m next to one, I might hop up to the C or even B-list. But Kim Kardashian fucked that up for us. You can’t deny that she’s on the A-list. She’s rolling with heads of state. And then you have reality stars who have their A-list seasons—everybody might know a certain Housewife for a year—but the reason that most of them are ultimately D-listers is because if there’s no skill set, they go away.” Dress from Palace Costume. Jewelry (worn throughout) by Mondo Mondo.

“I’ve seen all their penises. That’s a very common thing for male comics of that era, to literally whip out their dicks constantly, rub them against you, make a joke about it, and try to get you to touch it. That was just a day at the club. That’s what guys don’t understand. They think of it as a joke or a ‘get over it’ moment, because it’s not rape. The part that gets me is that it killed the dreams of the young women he encountered because they chose to speak out.”

“I’m hopeful that the network will get better, because there’s a real bro culture over there. And when I say bro culture, as a woman, I’ve got to include men of color, gay men, white men. If they get away from the kind of leadership that Jeff Zucker used over there, then they’re only going to get better. If they just put a woman at the helm—and not a corporate woman that’s been doing what Jeff wants—which has never happened, I think that’s going to change stuff pretty quickly.”

“I thought he was a real friend and I feel like a sucker. I guess I would say what he always says, which is, I wish him the best.”

“I don’t know that I desperately need one because I don’t think there are too many people in the business that don’t know who I am or what I do.”

“I’m disturbed by their ties to the Trump world and shady characters like David Pecker from American Media and the National Enquirer. That stuff was all fun and games when I was growing up with those headlines about lizard people, until they helped amplify an administration which mobilized a digital army of American human beings, who now believe there are such things as lizard people.”

“If I’m being photographed by paparazzi going for a walk with my husband, every other publication will be like, ‘She looks old and haggard.’ But The Daily Mail will be like, ‘Comedian Kathy Griffin goes out for a jaunty walk with younger husband.’ As someone who’s had an inordinate amount of bad press in the last four-and-a-half years, I’ll be shallow and say, I’m thankful for The Daily Mail.” Coat and dress by AMI.

“Extremely dangerous because it tends to come from the left. Jonathan Chait is a writer who I think would be surprised if I called him a casual misogynist. I think Chris Hayes on MSNBC is a casual misogynist. There are women who, to be super powerful, have to act like the dude. I don’t know Jennifer Salke [the head of Amazon Studios], but what I hear about her is kind of scary. I don’t know any executives that are women that don’t have maybe a little casual misogyny. They can be lethal because sometimes they’ll just cut you off and then quietly tell all the other guys that you’re a bitch.”

“Back in my day, I thought of them more as in-person. You’d hear about a feud on a set, like so-and-so is not getting along with so-and-so, and then it gets picked up by the tabloids. But now it’s all done online, which is different because it’s way more vicious.”

“I’m putting Sia on blast. This is her fucking fault. I was totally out of the Housewives and happy about it. First, she roped me back into Salt Lake City, because she promised me a felony and it delivered. Then she said I have to get back into Orange County, because there’s a crazy new girl named Noella. So like a sucker, I got into that. And now, I’m even back into Beverly Hills, because I’ve known Kathy Hilton for a long time, and she’s always been really quiet and shy, but she’s actually kind of dingbat funny on the show.” All Clothes by Tory Burch.

“They’re all so full of shit. And they should have to pay taxes.”

“Dave’s a genius, but I can never understand the Black experience, so I can only speak about Black people in a certain way, if at all. Dave doesn’t have the trans experience. They know he doesn’t know them, and that’s how groups get shit on—when somebody who doesn’t really know what they’re about makes assumptions.”

“What I take umbrage to is when people talk about people being canceled. Like Roseanne, who called Valerie Jarrett, my friend, an ape. Pardon me? I don’t want to be in that article. I never did that. I wouldn’t. And Roseanne should have paid the price. I took a picture of a monster and I portrayed him as a monster. And I was erased.”

Special Thanks to Nina Klimov-Horkins 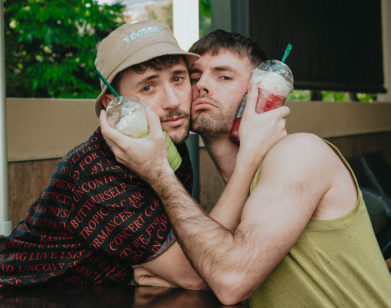