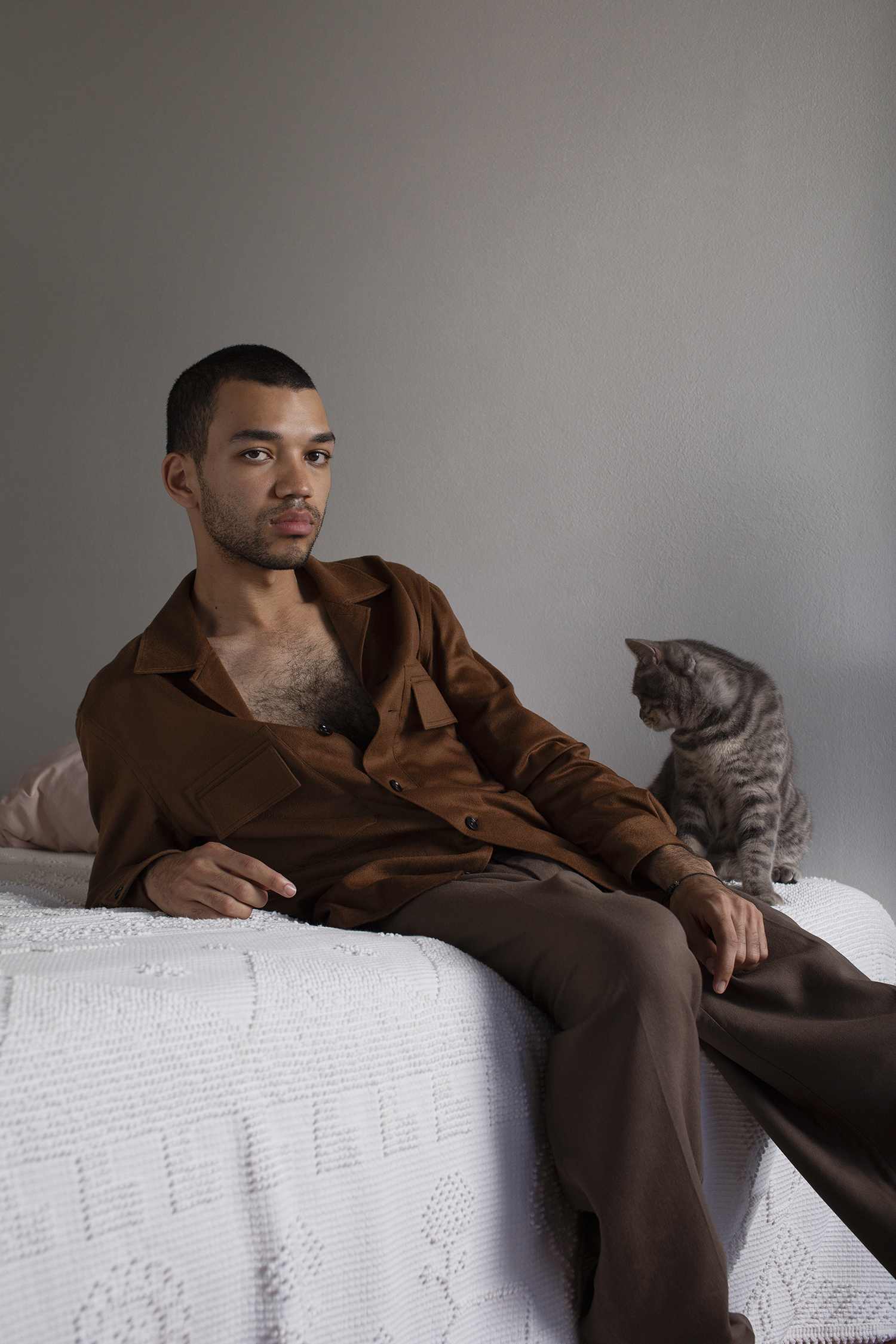 Justice Smith has shared a screen with a T-Rex, a Pokémon, and a dragon, but the 25-year-old star of the Jurassic World movies, Detective Pikachu, and the upcoming Dungeons & Dragons, is way more than a blockbuster muse. Smith, who got his break after Baz Luhrmann cast him in the Netflix musical The Get Down, has also proven himself to be a performer as thoughtful as he is fearless, starring in challenging projects like the off-Broadway play The Mother (opposite Isabelle Huppert) and the HBO Max drama Generation. It’s the latter role, as a crop-top wearing, max-confident, gay water-polo star that has made Smith, who came out as queer last year, a standard-bearer for Gen Z—even though he’s not really a member of it. Just barely.

“I had a lot of practice in theater school acting against no one because there’s a whole focus on monologue work, which is essentially just imagining your scene partner there. When it came to these blockbuster movies that had green screen in them, it didn’t feel much different from that.”

“I used to be very pretentious about the content that I was a part of. I wanted to live a struggling actor’s life and do indies, but my career decided for me that I was going down a different path. Being a part of those movies taught me a lot about what it means to appeal to a mass audience. My dad only watches blockbuster movies. I realized that the purpose of storytelling is to make people feel something. It doesn’t take any artistic value away just because they’re not in black and white or in French.”

“I have no idea what that is.”

“I’m right on the cusp of millennial and Gen Z. I believe you can call me a zillennial. Growing up, my older siblings would gatekeep the term millennial and I would be like, ‘No! I’m the youngest millennial! It cuts off at 1995, I’m part of this, too.’ Now that I’m 25 and see how cool Gen Z is, I’m trying to get in there and identify with them. I feel very at sea and I’m waiting for someone to claim me.”

“I offer that the minute you put on a crop top you’re going to realize that your whole life has been a lie. Every man should own one.” “I don’t like that word. The person who coined that term debunked his own theory when he studied wolves in the wild and noticed how males don’t exhibit the same dominant behavior as they do in captivity. This idea that you’re only a man if you’re alpha; actually, it’s like you’re acting as if you’re trapped. If you’re asserting dominance over other people, you’re behaving like an animal in a prison.”

“There’s a healthy form of it that we’re slowly tapping into. Masculinity has always been defined as an opposition to femininity. As I explore my own masculinity, I realize that it’s an entity of its own and there’s so much virtue in it, but I think it’s been bogged down with all of these connotations of dominance. As we’ve learned, acting out of dominance is like acting like you’re in captivity.”

“More fun when I had less followers. Now it gives me a lot of anxiety. I recently unfollowed everybody except one account, @yung_pueblo. I don’t know how to describe him except as a high-minded, spiritual philosopher. It’s just me and him on my feed and I’ve never been happier.”

“I went to an art school where there were a bunch of rich white kids who were the offspring of conservative parents, but were clearly in some sort of rebellious phase because they wanted to be artists. They were feigning liberalism, but from time to time conservative values would slip out, and I experienced racism and crazy shit at that school. It’s not the most ideal place for someone who looks like me.” “They did me dirty. I got fired from the show I was on, but my agent wasn’t told, and I wasn’t told. I was just replaced. But I still watch the first three seasons of SpongeBob SquarePants when I go to sleep. That’s the greatest television show of all time.”

“I look at it before I see any movie. The scores of the movies that I’ve done haven’t been the best, but I still love it. Are they always right? No. A lot of my favorite movies have low scores. Girl, Interrupted has a low score. The Wiz has a low score. It’s like, ‘Are you fucking kidding me?’”

“I see everything. On Instagram, you have to click to read the comments, but Twitter is hard to escape. I don’t know if people realize that there’s a real person behind the account that you’re replying to and they’re probably going to see your message even if they don’t reply. Just be nice.”

“Viola Davis. Frank Ocean. They both seem like people who have garnered success by living their truth. They use art as a medium to connect with others. It doesn’t feel self-serving. It doesn’t feel like it’s for financial gain or popularity. It just feels like an authentic expression of themselves through their art. That’s what I aspire to do.” “It’s a hard name to have in that there’s so much to live up to, especially in this age of wokeness and activism. There’s a very slight energy that hums in the background of my life that I need to be a purveyor of justice, but I do find that I am naturally diplomatic. I’m always looking for fairness in a situation and I’ve always been intrinsically humanitarian, maybe not necessarily with my actions, but with my beliefs.”

“I really like it because it’s so basic in comparison to my first name. It’s also representative of my Black Americanness in that I don’t know the genealogy behind it, likely because of slavery. It’s representative of my ancestors and the struggles of my people. I like feeling connected to the people that came before me.”