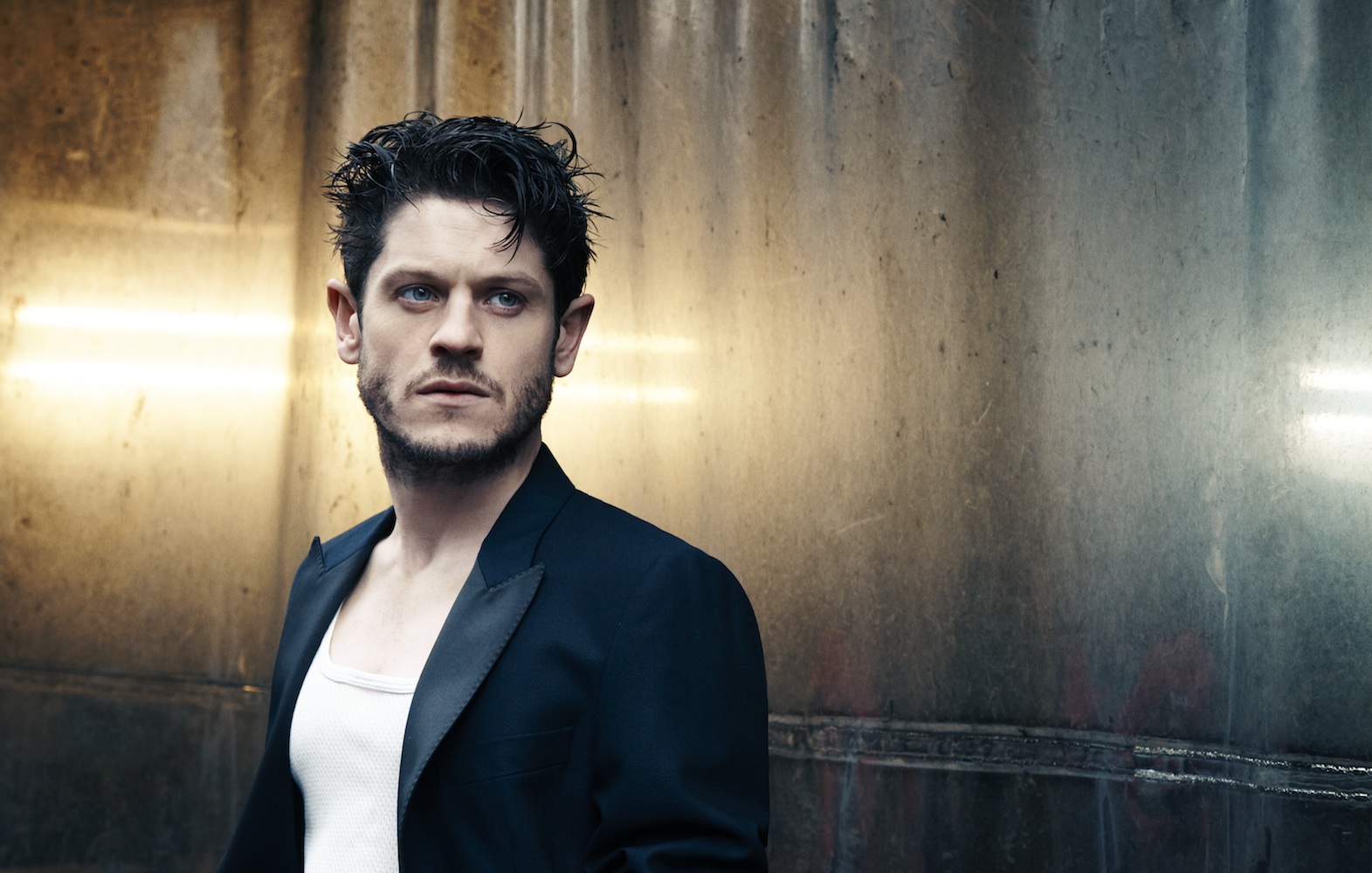 When strangers approach Iwan Rheon, the Welsh actor assumes that they recognize him from HBO’s monolithic fantasy drama Game of Thrones. Last week, The New York Times anointed Rheon’s character Ramsay Bolton as “the most hated man on TV.” It’s not an unfair description; the younger Lord Bolton is responsible for many of the show’s most gruesome scenes. Rheon’s Ramsay is callous and perverse, and he relishes in it. “There’s a joy in doing all these horrible things,” Rheon explains of his character.

Often, however, fans want to talk about the British television show Misfits. From 2009 to 2011, Rheon played a maladjusted, lonely teen named Simon. Although it’s no longer on the air, Misfits continues to gain traction in the U.S.  “I think that plays in my favor,” the 30-year-old says. “It helps them realize I’m an actor who just happens to play that role.”

Born and raised in Cardiff, Rheon spent a few years on a Welsh soap opera before getting his degree at LAMDA in London. He’s also a musician—he released his debut album Dinard last year—and has a very un-Ramsay Bolton like background in musical theater.

EMMA BROWN: Did you grow up in a creative family?

IWAN RHEON: My parents aren’t artists or anything, but growing up in Wales, especially in a Welsh language school and community, they have this thing called the Eisteddfod where people compete in singing and acting and dancing and oratory all sorts of things. From a very young age, it’s been a part of my upbringing.

BROWN: When did you decide you wanted to go to drama school?

RHEON: I was in sixth form in school, at that point where they go, “Right, what are you going to do when you leave here?” I thought I’d give acting a whirl and audition. I did that for a year and I got the part on Pobol y Cwm when I was 17. The producer Bethan Jones pulled me into her office. I was going, “Shit, what have I done?” And she said, “Look Iwan, I think you should carry on, you should go to a drama school.” I think she thought that, at that young of an age, I needed to develop my skills more. I could have stayed on Pobol y Cwm for a few years and made a lot of money, and there’s nothing wrong with that, but I think she thought if you want to get on stage, you need to go do that sort of stuff. So she helped me with my audition speech, because I’d never acted in English. I had to do Shakespeare, and she took the time out to do Shakespeare speeches with me in her office. She was amazing.

BROWN: Did you have a stronger Welsh accent before you started drama school?

RHEON: Probably. It’s a weird thing with accents. When I go home it gets a lot stronger, when I’ve had a few beers it gets a lot stronger. I think drama school really teaches you how to annunciate; you’re conscious that people might not understand you if you speak too fast and too Welsh. [But] weirdly, when I was in drama school my accent probably got stronger because of that sense of identity when you leave home and go to somewhere where there are loads of people from different places. Holding on to being Welsh and where I was from was a real crutch for me.

BROWN: It’s a great school, obviously, but what made you choose LAMDA?

RHEON: I got in. [laughs] Simple as that. I only applied for RADA and LAMDA. I didn’t get into RADA and I got into LAMDA. I might not have ever tried again. You just don’t know when you’re that young.

BROWN: Drama school, particularly in England, has a reputation for being very theater based—they don’t teach you acting for the camera. Did you find that?

RHEON: Absolutely. The television and film bit we did was diabolical. It was run by dinosaurs and it had no relevance to what was going on in the industry at all, in my opinion. I’d done two years on a soap opera where I was shooting things every day and they gave me a hard time about that, which I think is the wrong way to teach a young actor. They just made me really, really self-conscious about everything I did, which is the opposite of what you need to be when you’re filming. But that was just how it was at LAMDA at the time. I’m sure it’s better now.

BROWN: What was your first paid professional role as a drama school graduate?

RHEON: I did a workshop for a musical that Yusuf Islam, who used to be Cat Stevens, was developing. It was really random. It was two weeks of workshop, working on the tunes. I was playing this part of a busker. I don’t think the musical ever came to fruition. It was bizarre, because I was a huge Cat Stevens fan as well. It was a bit of a dream. He’s a legend.

BROWN: I read that you originally auditioned for Jon Snow on Game of Thrones. Is that true?

RHEON: When the pilot first came it was a general audition. I think it was for Viserys, Daenerys’s brother. And then they were like, “Can you come back in and read for this other character, Jon Snow?” At the time I didn’t know much about it. So I auditioned for Jon Snow, but so did a lot of other people probably. [laughs]

BROWN: Did they tell you how far you got in the process?

RHEON: I think it was between me and Kit [Harington], which is quite crazy. It could’ve been so different. I’d be dead now. [laughs] I think they made the right choice; it would’ve been a very different Jon Snow if I’d played him. I don’t think there’s much point in dwelling on these kind of things. You’re inevitably going to know other actors going up for parts and you have to be open about it. The majority of the time it’s a specific thing they’re looking for, which could easily come down to how you look, and there’s not an awful lot you can do about that.

BROWN: Some of the actors I’ve spoken with have said that they used to be put off by a character description, but now they’ll audition even if they don’t fit the brief. How do you feel about that?

RHEON: Yeah, you are just like, “Oh what part am I going for… Robert. Tall… black…” [laughs] “Are you sure this is for me?” You never know, though. You could walk into the room for an audition and they may go, “That’s exactly what I’m looking for.” You can’t be dismayed. If they ask you, you just go in, I think.

BROWN: When you got called back in for Ramsay, did the producers tell you they remembered you. Did it feel like you had an edge?

RHEON: Not really. I thought they’d forgotten all about me. I actually auditioned for Ramsay. I was working on a film in Spain and I had to send in a tape. I don’t really know what the initial reaction was. Luckily, I was back in London for a week in the middle of shooting, and the guys happened to be there so I could go in and meet them for an audition. I was going in for two roles even then, Daario Naharis was the other one I think.

RHEON: Yeah, hopefully that says something about me. [laughs]

BROWN: You should point that out next time someone asks you if you feel typecast.

RHEON: Yeah. I can do anything! [laughs]

RHEON: It was a Ramsay scene, but the character was called “Boy.” I wasn’t allowed to disclose the name of the character until episode 10 of season three had aired. That was fun for me. People were like, “You’re in Game of Thrones, that’s great! Who are you playing?” “Um… Boy? I’m playing a character called Boy. He’s a real character, honestly!” [laughs] I think they wanted it to be a reveal in episode 10, because a lot of the fans, especially people who had read the books, were waiting for Ramsay to rear his ugly head. They wanted to keep a bit of intrigue—”Who the hell is that?” Also, you don’t get to see that bit in the books. You find Reek and he’s already been tortured. The audition scene was the first time you see the switch—Episode Six Season Three. You’ve got Ramsay with Reek, or Theon as he was at that point, on the cross.

BROWN: And you thought, “Yes, this is what I want to be doing.”

RHEON: Well, at the time I was just auditioning for something I knew was a good show. I didn’t know he was Ramsay until I was offered the part. I was like, “I’m not just playing a character called Boy?” I already sneakily suspected that’s who the character was, just based on what I’d heard about him. I hadn’t seen the show, so when I got offered the role I watched seasons one and two and loved it.

BROWN: What was your first meeting with Alfie Allen like, knowing you were going to have do these torture scenes? Was it similar to when you meet someone you’re going to do a love scene with?

RHEON: It was fine. I kind of knew him anyway from various things and I’d met him during the first round of auditions for the Game of Thrones pilot. He was very close to being in Misfits as well if I can remember. It wasn’t awkward. I saw him at a charity event and I was like, “You and me are going to have some fun, boy.” [laughs] It was fine.

BROWN: You’ve said Health Ledger, Dennis the Menace, and Liam Gallagher are some of your inspirations for Ramsay. When did you come up with that combination?

RHEON: [laughs] It’s just a joke. Not really, but it sort of is. When I was starting to try to bring the character to life and move around with him and see how he felt in the space, Heath Ledger’s Joker was an obvious psychopathic, unpredictable character. Dennis the Menace came later. It’s an example of the energy in how naughty he is—he enjoys it. He’s mischievous. Liam Gallagher, it’s just the way he walks. I thought he had a proper strut on him and Liam’s strut and attitude would help the way I moved.

BROWN: I really hope that Liam finds out and that you meet him.

RHEON: I’ve always been such a massive Oasis fan, I think I’d shit myself if I met him, to be honest. [laughs] I walked past Noel Gallagher on the street once and everyone was like, “Go speak to him! He’s one of your heroes!” I thought I’d leave him. I don’t know what I’d say to him.

BROWN: I don’t know if he’s the kind of person who wants to be disturbed on the street, it might be quite disappointing.

SEASON SIX OF GAME OF THRONES  IS CURRENTLY AIRING SUNDAY NIGHTS ON HBO.