Gwendoline Christie is not interested in bullshit. Or, as she describes it with perfect iambic pentameter, “manufacture and the righteous grin of normality.” The 40-year-old actress has made a career playing a whole host of long-limbed warriors in The Hunger Games: Mockingjay, Star Wars: The Force Awakens and The Last Jedi, and, most notably, Game of Thrones. But Christie is more invested in idiosyncrasy and the humanity that hides on the fringes of the status quo. Perhaps it’s her method background — the Royal Shakespeare Company gave the 6-foot-3 star her first job out of drama school, in Great Expectations — that allows her to enter any setting with unbridled self-assurance, the kind that presents itself in photographs as she towers over her partner, the designer Giles Deacon, in killer heels.

Christie’s aversion to toeing the line, and all its prescriptive codes, is something she shares with her longtime friend Beth Ditto of the post-punk rock band Gossip — a self-described “fat, feminist lesbian from Arkansas” and a warrior in her own right. Years after Christie washed Ditto’s feet (there’s video footage somewhere), the pair reunited to talk about assless chaps and learning to walk again, with a quick break to write an e-mail to will.i.am. —SARAH NECHAMKIN

BETH DITTO: When I was interviewed by Interview, they asked me who I wanted to be interviewed by, and of course I said Miss Piggy. They made it happen, and I felt like I was talking to my idol. Is that how you feel right now?

GWENDOLINE CHRISTIE: What did Miss Piggy ask you?

DITTO: They asked if I could do it over e-mail. I guess I wasn’t important enough to do it over the phone.

CHRISTIE: Can I ask you a question? Why are your feet so dirty?

DITTO: Because I’m a hillbilly!

CHRISTIE: Have you ever even watched my show?

DITTO: I never have.

CHRISTIE: I cannot believe that someone who I’ve known for years—although not sexually yet—has not watched Game of Thrones.

DITTO: But you have washed my feet.

CHRISTIE: I did—with my hair! You once sent me a video message, and it started with that grubby foot of yours. How are your heels? 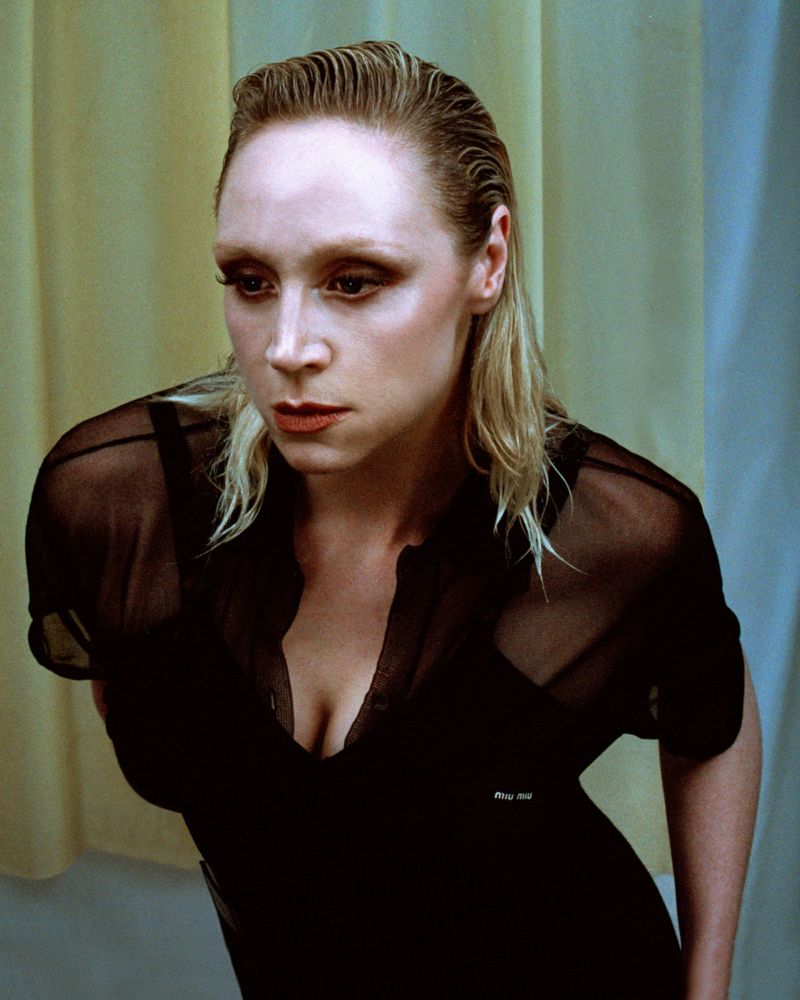 Top by Miu Miu. Bra by What Katie Did. Leggings by Capezio. Vintage Belt from Albright Fashion Library.

DITTO: They are. Does it make you sad that I haven’t seen your show?

CHRISTIE: It doesn’t make me that sad. Lots of people I adore haven’t watched it. I don’t really mind that because I’m surprised that you all still like me for being myself.

DITTO: I’m afraid I won’t like you when I see it.

CHRISTIE: So just continue liking me.

DITTO: One of the best compliments anyone ever gave me: “I hate your band but I love you so much.” Are people surprised when they see you in real life?

CHRISTIE: I get a variety. I get, “You don’t look at all like your character.” But I also get, “My God! You really are as tall in real life!” I also get people saying, “How does it make you feel to play such an ugly character on television?”

DITTO: If it wasn’t for punk rock and stuff, I wouldn’t know what the fuck I’d do because it really did turn the word “ugly” around for me.

CHRISTIE: That’s the bond that you and I have had across the ages—I’m interested in things outside of the status quo. And that’s where I think humanity is. I’m not very interested in manufacture and the righteous grin of normality. But if you give me something idiosyncratic, then I’m interested.

DITTO: I don’t even know what idiosyncratic means.

DITTO: It’s a cereal? Are you kidding me?

CHRISTIE: Yes, you pour idiosyncrasy out, pour milk on it, and it goes well with orange juice.

DITTO: You’re such a sophisticated momma. [To Interview executive editor Thom Bettridge] Can you Google what this word means?

DITTO: What do you call a group of flat-butted men walking around England?

DITTO: Are people often shocked by how funny you are?

CHRISTIE: People are often surprised that I smile. The person who was most surprised was will.i.am, the musician. He was so surprised that he gave me his e-mail. We should e-mail him.

BETTRIDGE: Go ahead and dictate.

CHRISTIE: Hi, Will, Beth Ditto and I are just chatting about you during our interview. We are sending you much love. Sincerely, G and B. P.S.: Can we do a record with you? P.P.S.: You’ve got to come on board with our cereal project. It’s called Idiosyncrasy Oats.

DITTO: Also, will you ask him about Fergie doing backflips on the Today show? CHRISTIE: I think that was already enough to make him never want to speak to either of us again.

DITTO: Do you go to Comic-Con?

DITTO: Have you thought about selling the tickets?

CHRISTIE: No, but that’s an excellent idea and now I’m going to. I’m not even sure this interview will put HBO off giving me the tickets. They would want me to have the scrilla.

DITTO: Scrilla? The words y’all have in England blow my mind.

CHRISTIE: I want another question.

DITTO: After you’re done shooting, do you bring your sword off the set with you?

CHRISTIE: When I go out for a drink, it’s only yak’s blood that one of us has killed in the field with our bare hands. But to be serious, as far as that goes after shooting, it becomes easier to switch it on and off. Initially, it was hard. I spent four months before the job even started changing the way I walked, so I would be able to move into that physicality with more ease. But still, that costume was very intense and often very painful. After a long stretch, it can be hard to return to normal. Is it like that for you, when you’re coming off tour?

DITTO: No, hearing you talk about what you put your body through, this is a completely different process. When I’m performing, I only have one button. And I feel like the difference between my artist friends and me is this transformation that I just don’t do.

CHRISTIE: I don’t think being an artist means transforming from one thing to another. I think people can just be born a certain way. When you sing, you have such incredible natural ability.

DITTO: I don’t really feel like a great singer. Not in a bad way, but when I hear you talk about how hard you work, it makes me envious.

CHRISTIE: The difference between me and the character I play is enormous. There is a lot of work to be done to get there.

DITTO: Did you go to school for acting? CHRISTIE: I went to a classical method school called Drama Centre London, where I studied for three years. It was very rigorous physically, emotionally, intellectually, spiritually, everything. Then, luckily, my first job was at the Royal Shakespeare Company, so discipline was firmly injected into my life.

DITTO: And you’re a Scorpio.

DITTO: You nut-job. I’m a Pisces. We go hilariously well together.

CHRISTIE: If you feel like you need something, you just do it, don’t you?

DITTO: Ding, ding, ding. And I know it sounds hippy-dippy, but I don’t have a need to do anything except to be around people I love — family stuff. Not my real family, but my chosen family.

CHRISTIE: I have friends in London who have given me 20 years of support from feeling marginalized. No matter what misfortune I’ve had, I had always felt really loved by my friends. Friends like that love you from your embryonic stages of being.

CHRISTIE: Because they have so many options.

CHRISTIE: You and I have had to be inventive over the years.

CHRISTIE: That’s why I didn’t wear a trouser for maybe the first 20 years of my life. I would wear a pencil skirt and have kind of an Audrey Horne in Twin Peaks vibe.

DITTO: You love a challenge!

CHRISTIE: I love my work, and I’ve tried to subvert conventional narratives and gendered stereotypes. I try to use the platform I’ve been afforded to do something decent and help other people, because God knows I need as much help as I can get.

DITTO: Somebody help her!

CHRISTIE: Please, somebody help me!

DITTO: I think that what’s missing from the world sometimes is empathy.

CHRISTIE: It’s exactly that. So much of what’s missing from the world is compassionate reasoning. Being driven by satisfaction doesn’t really lead anywhere.

CHRISTIE: When am I going to see you play again?

DITTO: I’m actually in a TV show right now. It’s called On Becoming a God in Central Florida. I feel like a bit of an imposter, because it doesn’t feel like acting. I just remember the lines and say them.

CHRISTIE: You’re never going to stop feeling like an imposter on set, but by the simple fact of being someone else, you are acting.

DITTO: One thing about being in the business of being creative is that not everybody else gets your fucking life. I’m not going to call my brother at Walmart and say, “Hey, you’re not going to believe the day I had.” So it’s really nice to hear you talk about that.

CHRISTIE: For a long time, I wasn’t allowed to talk about what I was doing at work, any of it.

DITTO: Do you want me to tell you why I haven’t watched your show?

DITTO: Because I have such bad ADD.

CHRISTIE: Or is it because your feet are too dirty?