This is The Vault, our new bi-weekly column where we revive a conversation from deep in the archives for your viewing pleasure. This week, on the occasion of his new Netflix thriller The Guilty, we’re kicking things off with Jake Gyllenhaal’s first Interview feature from our August 2002 issue. Below, the then hot up-and-comer chats with his Moonlight Mile co-star Susan Sarandon in the women’s bathroom of a New York restaurant. Go ahead, dive in.

SUSAN SARANDON: Here’s the scene: We’re at a Manhattan restaurant named Man Ray and we’re in the ladies’ room because the tape recorder only works with a cord and this is the quietest place to plug it in. So Jake, now that we’re comfy, let’s cut to the chase—you’ve got some movies coming up.

SARANDON: Hello. You can come in. Don’t mind us, we’re just doing an interview.

WOMAN: You’re doing an interview? Are you going to listen to me pee?

SARANDON and GYLLENHAAL: OK. [both laugh]

GYLLENHAAL: Anyway, I’ve got three movies coming out, and the third one is our movie together, Moonlight Mile.

SARANDON: Gotcha. And the one before that?

SARANDON: And who’s in it?

SARANDON: Excellent. What is the theme of that one, in a nutshell?

GYLLENHAAL: It’s about a woman who lives in this small town in the middle of America. Her life is getting her down and she’s trying to have a child with her husband and she and I meet and have a crazy rampaging love affair.

SARANDON: And the first movie?

WOMAN: —I want to hear about the interview.

SARANDON: No, you’re in the right place. We’re just doing an interview.

SECOND WOMAN: Do you mind if I send my girlfriends in? They’re really into this stuff. They’re very pretty blondes, so you won’t mind.

SARANDON: Sure, he won’t mind. But don’t tell everyone or we’ll get mobbed.

GYLLENHAAL: So this is what it’s like in the ladies’ bathroom.

SECOND WOMAN: What is your name?

SECOND WOMAN: Are you a producer or a writer?

GYLLENHAAL: Now you won’t send your girlfriends in…

SECOND WOMAN: [laughs] No, I’m really bad with that kind of stuff, but they’ll know you.

SARANDON: [laughs] They will, because he’s the Next Big Thing.

SECOND WOMAN: This is so exciting. Someday I’m going to say, “I met him in the bathroom.” [exits] 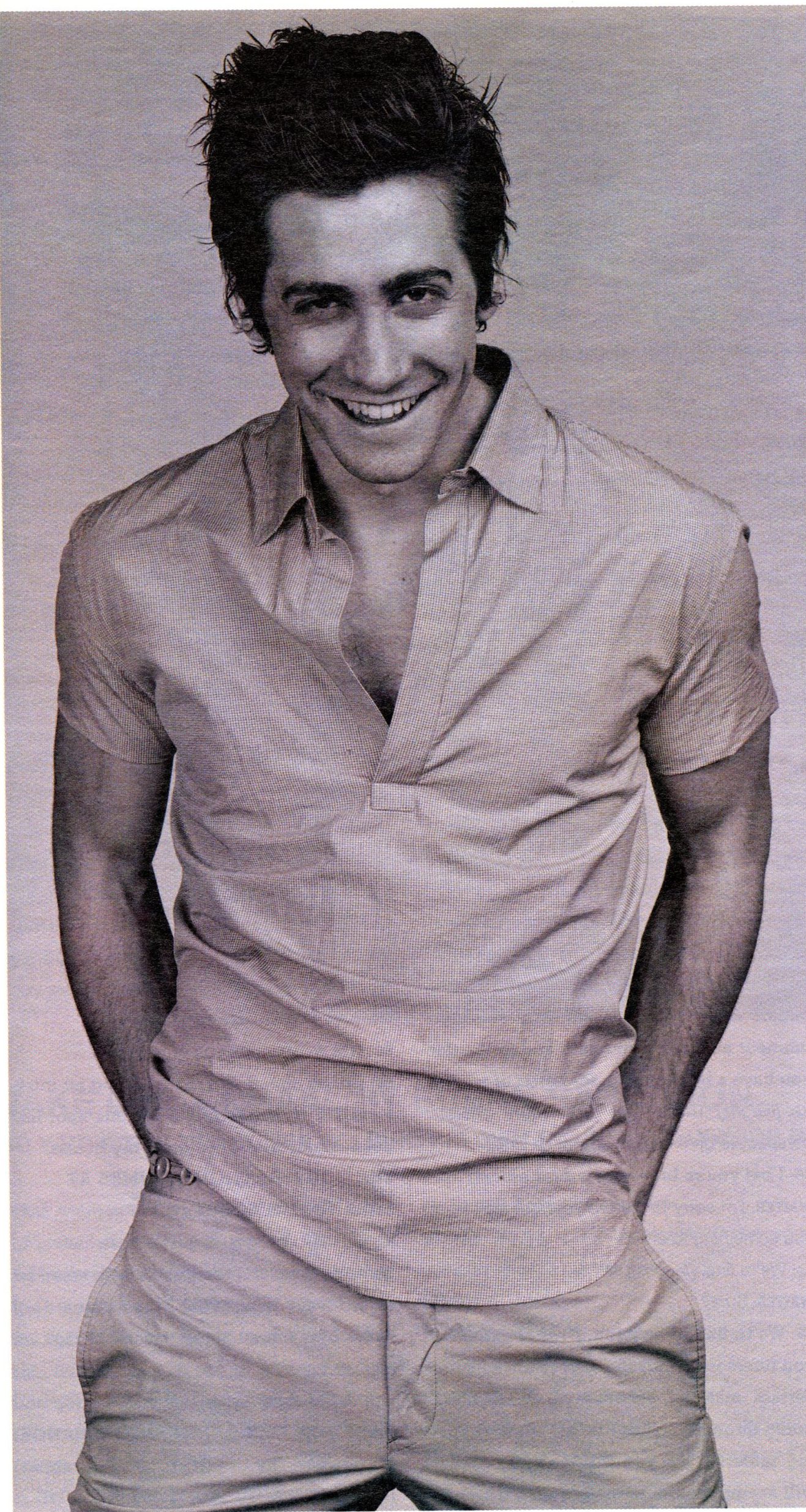 SARANDON: So, when do all your amazing movies come out?

GYLLENHAAL: Lovely & Amazing will have opened by the time this article comes out, The Good Girl comes out August 7, and then our movie opens September 20. [Moonlight Mile co-star] Dustin [Hoffman] came to my play [This is Our Youth, which Gyllenhaal performed earlier his year in London], you know. He came to the third preview and gave me notes afterward.

SARANDON: How fabulous! Was he helpful?

GYLLENHAAL: Really helpful. He didn’t call me—he just came to the play. In the middle of the intermission, the fireman who watches over the theater came in and said, “Dustin Hoffman is in the audience.” I was so nervous I ended up hamming up the second act. [third woman enters]

THIRD WOMAN: Excuse me, do you know Robin?

SARANDON: Oh, yes. We just met her. She said she was sending in a few people.

THIRD WOMAN: Yeah, she sent me. I wanted to come in and say hi.

SARANDON: Bye. So which do you like doing better, theater or film?

GYLLENHAAL:  I’ve only done this play, so—

GYLLENHAAL: [laughs] Theater has given me a different perspective on the way I approach films.

WAITER: I’m sorry to disturb you, but may I get you something to drink?

SARANDON: We’re fine, thank you. [Waiter exits] Do you find sometimes that you’re attracted to certain material because of what you’re going through in life? Or when choosing material, do you think about what it will accomplish in terms of your career?

GYLLENHAAL: I think that more and more there’s a sense that the best performances I can give are the ones that are the truest to who I am. The further I move away from who I am, the worse they are.

SARANDON: So you don’t see yourself as a character actor?

GYLLENHAAL: No. And I think the closer I get to myself, the wider the spectrum of what I can play.

SARANDON: You mean the closer you get to yourself, you start to discover your own voice and you get closer to the characters you play?

GYLLENHAAL: Yes. I think that we all have within us the potential for almost anything. If we play close attention to our lives, then we can get at it somehow. Susan, I have a question for you: How can you keep doing this for the rest of your life?

SARANDON: You never get it right, and that’s what seduces you. Plus, you can’t have a better excuse for traveling and being with interesting people. And you get to play—our work is best when we’re playing; that’s when interesting things happen. It’s a good reminder, as you get older. I just did a good reading of a play with Tim [Robbins], Paul Newman, Joanne Woodward and Matthew Broderick called Ancestral Voices. It was so great to find that Paul and Joanne, after being in the business for such a long time, are still enthusiastic about the process and working.

GYLLENHAAL: I want to do this for a really long time.

SARANDON: I think you could do it for as long as you want. [a fourth woman enters]

FOURTH WOMAN: Are you guys in line?

SARANDON: No. Go ahead. We’re doing an interview. [To Gyllenhaal] I think this spot has been discovered. Let’s go to my house.

THE CONVERSATION RESUMES AT SARANDON’S HOUSE.

GYLLENHAAL: So did I tell you that I’ve been talking to Bernardo Bertolucci about a role in his new film?

SARANDON: No way! What is it? I love Bernardo, I know him from way back. He’s amazing.

GYLLENHAAL: It’s called The Dreamers. It’s set in Paris in 1968 and this American kid goes there and has a love affair with a French brother and sister.

SARANDON:  Wow, right up Bernardo’s alley. That could be so much fun.

GYLLENHAAL: He has all these clauses about nudity.

SARANDON: Or, “You’re going to show your balls”? Do they have that one?

GYLLENHAAL: [laughs] No. If there was an ass shot, then maybe there would be a little arch of the balls.

GYLLENHAAL: I think they’d be really happy if I worked with Bertolucci. He’s someone they’ve always respected. My sister [Maggie, also an actor] just did this film—

SARANDON: —Where she plays a sadomasochist? I read about that one.

GYLLENHAAL: Yeah, it’s called Secretary and she’s amazing in it. She’s totally naked in the film, but in a very beautiful kind of way.

SARANDON: It must be weird, as a brother, to see your sister naked.

GYLLENHAAL: Yeah. The story’s beautiful and I recognize it as a plot point, but it’s still uncomfortable.

SARANDON: Now she might see her little brother naked. [laughs] Eventually your kid will say, “Is that you in that film, Dad?” [My son] Jack Henry came up to me the other day and said, “Is it true that you played a lesbian vampire?” [referring to The Hunger, 1983] I thought, No! Of course… oh, yes, I did! [both laugh] “Yeah, it’s true,” I said, and he and his brother went, “Oh, jeez Ma!”

SARANDON: They’re so cool. They’re the best. I love my kids. They’re such interesting people. Anyway, So did you get naked with Jennifer [Aniston] in The Good Girl?

GYLLENHAAL: In our sex scenes I spent most of my time covering her breasts.

SARANDON: But somebody’s got to do it. I like her a lot. Brad [Pitt], too.

GYLLENHAAL: They’re pretty great. There are all these great acting couples.

GYLLENHAAL: You know, he taught me how to drive.

SARANDON: No! How did that happen?

GYLLENHAAL: When I was 15, my mom was writing a script with him [The Horseman], and we went out to a racetrack and he threw me in a race car.

SARANDON: [gasps] I would have killed him! Did your little feet even touch the pedals?

GYLLENHAAL: He was driving the car and he threw me in the passenger’s seat and with his glasses dangling from his ear, he started driving on the track towards a brick wall. [Sarandon gasps again] We’re 100 feet from a wall, going 60 miles-per-hour, and he hits the brakes and turns the wheel and the car spins three times. So then he turns to me and goes, “That was what you don’t do.” SARANDON: When I did my love scene with Paul for Twilight [1999], he walked in in his shorts and his legs had bandages all over them and I said, “Did you shave? What is going on?” And he said, “Don’t tell anybody, but I was driving his weekend and I got all nicked up. I’m not supposed to be driving while we’re filming.” How do you get nicked up in a car?

GYLLENHAAL: Well, you’re going almost 200 miles-per-hour, if not faster, right? Your body and hands shake on the wheel as you drive.

GYLLENHAAL: Yeah, it’s pretty intense. It’s like when a scene is really working and—

SARANDON: —And your hands are shaking. [both laugh] He kept trying to get me to go driving with him.

SARANDON: Very cool. He’s in it for the long haul.

GYLLENHAAL: Here’s another question: When I was in Los Angeles and people would say, ” I saw your movie and it was so great,” and then I’d turn around and they’d be saying the same thing to someone I did not respect at all, I was like, “This is ridiculous!” I’d go from one end of the spectrum to the other, from “I’m so great” to “I’m total shit.” And I’d wonder, how do I know?

SARANDON: You don’t. You should take a year off from thinking, Jake.

GYLLENHAAL: Bernardo said that to me!

GYLLENHAAL: Yeah. He said, [in an Italian accent] “You need to take a year off from thinking. Come have sex in my movie!”