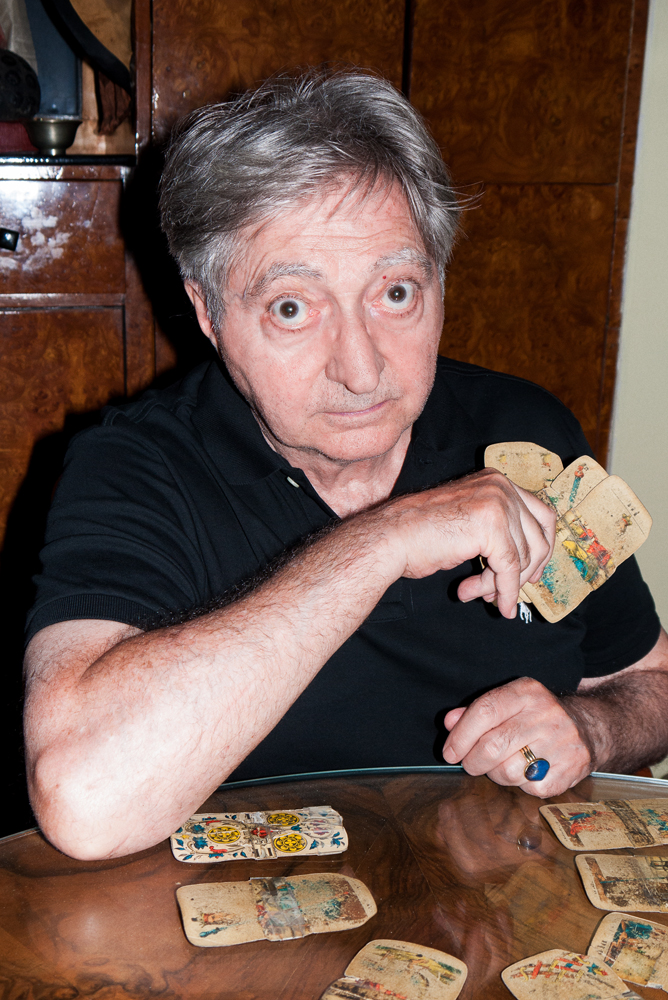 First Person is a series which takes stock of the formidable, phenomenal lives and careers of pop culture’s most captivating characters, starting from the very beginning.

When I came to New York, I was 18 years old and got a job at the Museum of Natural History. It was 1959, and I was renting out what they called radio guides—very primitive, with earphones and a big rope hanging around your neck. They were 50 cents. When I went outside on my lunch hour, all the gay boys were sitting along the wall of Central Park. I remember this one guy came up to me; he must have been about 29. He made a joke about his dog looking like Asta from the Nick and Nora Charles film [The Thin Man, 1934] and invited me to dinner that night. It was my third day in New York, I was scared to death, and now I’m going out to dinner with somebody. That evening he came and got me, and he took me to Auntie Mame’s house. The real one. Her name was Marion Tanner, and her nephew wrote the book called Auntie Mame. I became friends with her and later got an apartment not far from where she lived on Perry Street. A lot of her friends were derelicts, but there were also a few astrologers, palmists, and psychics, and she kept telling me, “You’re psychic.” I didn’t know what she was talking about, but after a whole series of events, I started studying, and my phone began to ring, and it’s been ringing ever since. That’s how I started. And I’ve met a lot of people in my 50 years of working as a psychic in New York.

I bought the house I have now on Mulberry Street in 1967. It was first an Irish neighborhood, and then the Italians moved in, and the whole area was taken over by the Mafia. A lot of them became my clients. People like Tony Soprano didn’t go to a therapist; they went to a psychic. My clientele has always ranged from movie stars to soccer moms to mobsters to judges. I never spent one penny on advertising. People got my number from friends. That’s how I met Bernard, and through Bernard, Andy.

Bernard worked with Rupert Jasen Smith, a very famous printmaker who did print work for Andy. They helped develop the silk-screening method. Andy liked Bernard, and even though Bernard technically worked for Rupert, Andy wanted him to be his bodyguard and companion when he went out. I asked Bernard if Andy ever tried to go to bed with him, and he said, “No, never.” He said that Andy hadn’t been with anyone in a long time. It’s so hard in the gay world—everyone wants the young. (It’s like a joke I make: Are you celibate? Yes, but not by choice.) Anyway, Bernard wanted to introduce Andy to me, and it just so happened that Andy wanted to see a play on Broadway that one of my clients had financed. This was around 1985. So I got tickets, brought a friend, and the four of us saw the play. After it was over, Bernard said, “Andy wants you to come to dinner.” At dinner, some of Andy’s entourage showed up. I never linked myself to his crowd. My feeling was that Andy took in a lot of untalented people and made them famous. I wasn’t interested in being a camp follower. I had my own life, and my own talents. So I never called Andy to make plans. We’d meet when Bernard called and said, “Andy wants to see you.” We’d have dinner. And, of course, Andy would always be asking me about my clients. He wanted to know who was sleeping with whom. I’d laugh and say, “I can’t tell you that! I don’t know.” He’d say, “You do know. Come on. I promise I won’t tell anyone.” But Andy was very charming about it. He wasn’t nasty. He just loved gossip.

At some point, Bernard had told Andy that I was good friends with John Lennon and Yoko Ono. I read for them. For my birthday one year, Yoko gave me a work they did called Bag One. It was a big white-leather case that held a series of 12 lithographs that John had made. It’s mostly John and Yoko having sex, but very tasteful. Well, Andy wanted that. This was years after John passed away. Andy suggested that he do my portrait as a trade. Bernard kept saying to me, “You’ve got to do it!” So they arranged for me to come up to the Factory one afternoon. Andy held two Polaroid cameras, one color, one black and white. He shot me sitting on a stool and standing up. I had asked in advance if I could bring my crystal ball with me. I learned later that I’m probably the only one of Andy’s subjects who holds a prop. He asked me what my favorite colors were. I said, “Blue and green.” I’ve heard that he did another portrait of me in yellow, but I’ve never seen it. I got the blue one. It’s been hanging in my room on the third floor of my house ever since.

I kept asking if Andy wanted to come for a reading, but, through Bernard, he always said no. He was worried about learning of his future. After my portrait was delivered, I had a feeling I wasn’t going to see him again. Here’s what happened: One night we all went to the Odeon for dinner. Everyone was talking and talking, and when it was time to go, I took out my deck of cards. I often bring a deck of tarot cards with me—not the ones I use for my readings, those are too old and never leave the house. And I just had this feeling I wasn’t going to see Andy ever again after this night. So I pulled a card from the deck and wrote, “To Andy, love Frank Andrews” on it. I slid it across the table. Andy picked it up, he looked at it, then looked at me and quickly put it in his pocket. It was the death card.

People always ask, “Why would you give him that one?” I say, “I gave him the one I picked.” I could have put it back and given him another, but at the time I thought, “Death also means a new beginning.” Unfortunately, for Andy, it didn’t mean that. He went into the hospital not all that long after that dinner. And, of course, that’s where he died. When I heard the news, I thought of the card, and I realized what it had meant.