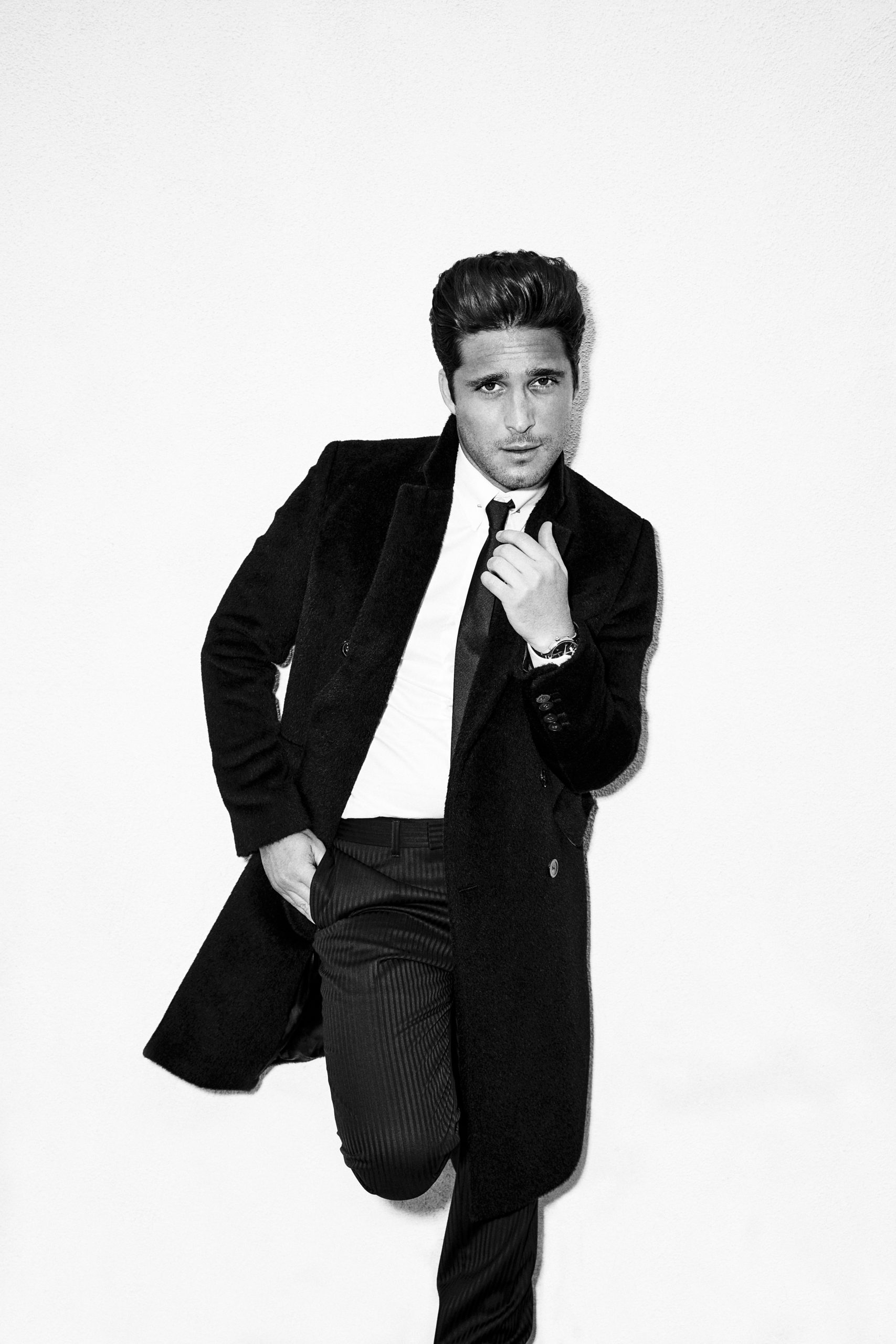 Diego Boneta, the 30-year-old México City native, actor, singer, and overall heartthrob was destined to shine bright as Luis Miguel—the legendary Mexican crooner known to the world as El Sol de México (and the guy who dated Mariah Carey from 1998-2001). When Boneta was only 11 he was chosen out of 40,000 kids to compete in Codigo F.A.M.A, an American Idol-like show for children, thanks to his adorable rendition of LuisMi’s “La Chica del Bikini Azul.” From then on, it was clear that the camera loves Boneta; his talent was overflowing, driving the crowds insane.

Much like the now 51-year-old pop star he portrays on Netflix’s Luis Miguel, Boneta has spent the majority of his life under the spotlight, which gave him the agency and comfort to not only act out the life of Luis Miguel but also take part in producing of the show—his first-ever production credit. Outside of Luis Miguel, Boneta is releasing Nuevo Orden, a Mexican-French dystopian thriller by Michel Franco, which won the Leoncino d’Oro Award at the Venice Film Festival this year. As the second season of Luis Miguel unfolds on Netflix (episodes drop every Sunday), Boneta took some time to talk to Interview about everything from his favorite cocktail to meeting the real-life Luis Miguel.

ERNESTO MACIAS: When you first learned that you got the role of Luis Miguel, what was the first thing you did?

BONETA: They actually offered me the role. I did not audition for it. Mark Burnett, who’s the executive producer on the show, and I worked on a show prior to Luis Miguel, called The Dovekeepers, where we became friends. I really wanted to get into producing. I admire so much of what Roma Downey, his wife, and Mark do. He called me up years later, and was like, “Diego, do you know who Luis Miguel is?” I was like, “Come on Mark.” I was like, No names. He’s like, “Hey, I don’t have a script. I have no director. There’s nothing for you to read, but you know how you wanted to find a project for us to produce together, let’s make this, that project.” This is the first project that I produced. I was super involved.  I was in the project six months before there were scripts, before there was another actor attached, before there was a director attached, and it was amazing. It’s literally, Ernesto, my baby. Not just mine, but the whole team of producers. Being a part of the early drafts and notes—what we want to tell, and how… It was way more than just an acting job.

MACIAS: What a big first task to take on as your first producing job, because not only is it a Netflix production, but also it’s someone who is such an icon, not only to Mexican people but to the world. Were you nervous about taking on such a big role?

MACIAS: How did you prepare?

BONETA: I mean, the number of hours I spent watching interviews, concerts! He’s been around for four decades. I just went through everything for about a year. Once we knew the scripts and the timelines, it was just really diving into those years—what mannerisms he had, tics, his voice, his body language. For season two, I really wanted it to feel like [the older and younger versions of Luis] were two different characters, two different bodies, two different voices, and really make him different. But throughout the season, you see how the younger one starts becoming the older guy.

MACIAS: You’re meshing the two into the one.

BONETA: Exactly. Seeing how he starts becoming that older guy and why. So the acting challenge for season two was way bigger because of that. It was double. There’s a lot of scenes that we recreated and we had to literally get it down to a T. Also there’s more freedom when it comes to the private life of Luis Miguel because he’s always been someone who’s been so private. There’s no reference of Luis Miguel behind the scenes. You know nothing about him. That’s where we didn’t want it to feel like a caricature. We wanted it to feel very grounded. Meeting him helped a lot.

MACIAS: How was that?

BONETA: It was crazy. I mean, normally when you do biopics, it’s when the artist has passed away. So the actor can’t have that dialogue with the artist. Being able to spend time with him on several occasions, I was like a sponge. I was looking at everything he was doing, how he talked. He’s a very funny guy, he has a great sense of humor. We had a great bond because he also understood how weird it was that we had the opportunity to talk. When we spoke about our favorite biopics back in 2016, when we met, he mentioned my favorite ones too: Ray, Walk The Line. I go, “Dude, I swear to god, that’s what I want to base Luis Miguel on.” In both of those biopics, the actor wasn’t able to meet the artist.

MACIAS: So you had that extra layer.

BONETA: We took advantage of that and he told me some things. He was like, “Listen, man, I want to tell you things, this is just for you. This is not for the writers. This is not for the show. This is to help you with your character.” Those things made such a big difference. Me los llevo a la tumba, brother.

MACIAS: That’s so special that he wanted to help you ground the character with real experiences. Was there a certain episode or scene that you were most excited or nervous for people to see from the new season?

BONETA: There’s so many, Ernesto. I was very nervous for people to see the ending of season one, because that’s where you find out what happened to his mom, Marcela. That was a tough scene because we wanted to tell the audience what happened without being overly vulgar about it. It’s a sensitive subject. The ending of episode two is when I meet Michelle [Salas] for the first time, his daughter, and how that’s linked to him singing the song to Marcela, “Hasta Que Me Olvides,” which is a song by Juan Luis Guerra.

BONETA: Then there’s another scene in episode five, which is great. I don’t want to give you the spoiler. What’s tough about the show and what’s great as far as acting is, every professional accomplishment comes hand in hand with a personal tragedy. Season two is darker because of that. He reaches a height in his career that’s insane. The stuff that he goes through, it’s just tough, and that makes him a darker human being.

MACIAS: What do you hope that people take from Luis Miguel’s story after watching it?

BONETA: I hope people empathize with him. If during season two, the audience is watching a scene where Luis Miguel is being an asshole and people are understanding and empathizing with why he’s doing it or understand where it’s coming from, then I’ve done my job. I wanted to show a darker character and a more real human being. We all make mistakes. We all try to do our best with the cards life dealt us. want people to be able to not only admire the artist, but also admire the person. What he lived through in his childhood—I mean, what happened to his mother is crazy. That shapes a human being. MACIAS: How did this happen to you? When did you start acting, singing?

BONETA: I started acting and singing when I was 10 years old. My parents have nothing to do with the business. I don’t come from a family in the entertainment business at all. They’re both engineers but I just loved music. I started taking singing lessons when I was eight years old. I begged my parents to let me audition for this singing reality show called Código F.A.M.A.

MACIAS: I remember it.

BONETA: The first song that I sang on Código F.A.M.A. was one of Luis Miguel’s songs, which was random.

MACIAS: Which one was it?

BONETA: “La Chica Del Bikini Azul.” How crazy is that?

MACIAS: That’s full circle. Of all the work you’ve done as an actor. Which one’s your favorite so far?

BONETA: Luis Miguel and Nuevo Orden. Nuevo Orden is a movie that I did with Michel Franco. It won the jury prize in Venice this year. It’s an incredible movie.

BONETA: It talks about polarization and it could not be more opposite and different to Luis Miguel. I also produced that movie, and it’s very timely with everything going on. Michel Franco is a genius.

MACIAS: Who was the nicest person you ever worked with?

BONETA: The nicest person I ever worked with was Tom Cruise. We did Rock of Ages together, back in 2012. That was my first movie. And man, he mentored me throughout the whole movie. I see him as my mentor today. I learned so much from him. He’s such a humble guy and very professional. How he talks to you—he makes you feel like you’re the only person alive.

MACIAS: Who are some of your favorite actors of all time?

BONETA: Marlon Brando, Paul Newman. I really like Tom Cruise, especially after working with him. Hugh Jackman because he also does a lot of singing. He’s a great role model as far as acting and singing.

MACIAS: Do you play any instruments?

MACIAS: So you bonded through that. Are you a good cook? If so, what’s your specialty?

BONETA: I suck at it. I hate cooking. I’m not good. I’m good at making drinks though.

BONETA: Just a tad of tequila.

MACIAS: Is there anything you regret not doing?

BONETA: Probably what makes me most nervous is auditioning. But I’ve gotten used to it. I get more nervous with small crowds than with bigger crowds.

MACIAS: Where do you think that comes from?

BONETA: Probably because of the singing background.

MACIAS: How many hotels have you been kicked out of in your life?

MACIAS: Where and why?

BONETA: México City. Why, I’ll tell you off the record another time. [Laughs]

MACIAS: What’s the craziest thing a fan has ever sent you?

BONETA: A picture of my autograph tattooed on her.

MACIAS: That is crazy. What do you do in your spare time?

MACIAS: That’s a good name. How do you keep your good looks?

BONETA: I like feeling healthy. I like to work out. A lot of it is mentally, especially tennis. It’s like therapy for me. I try to eat healthy.

MACIAS: What kind of roles are you after now?