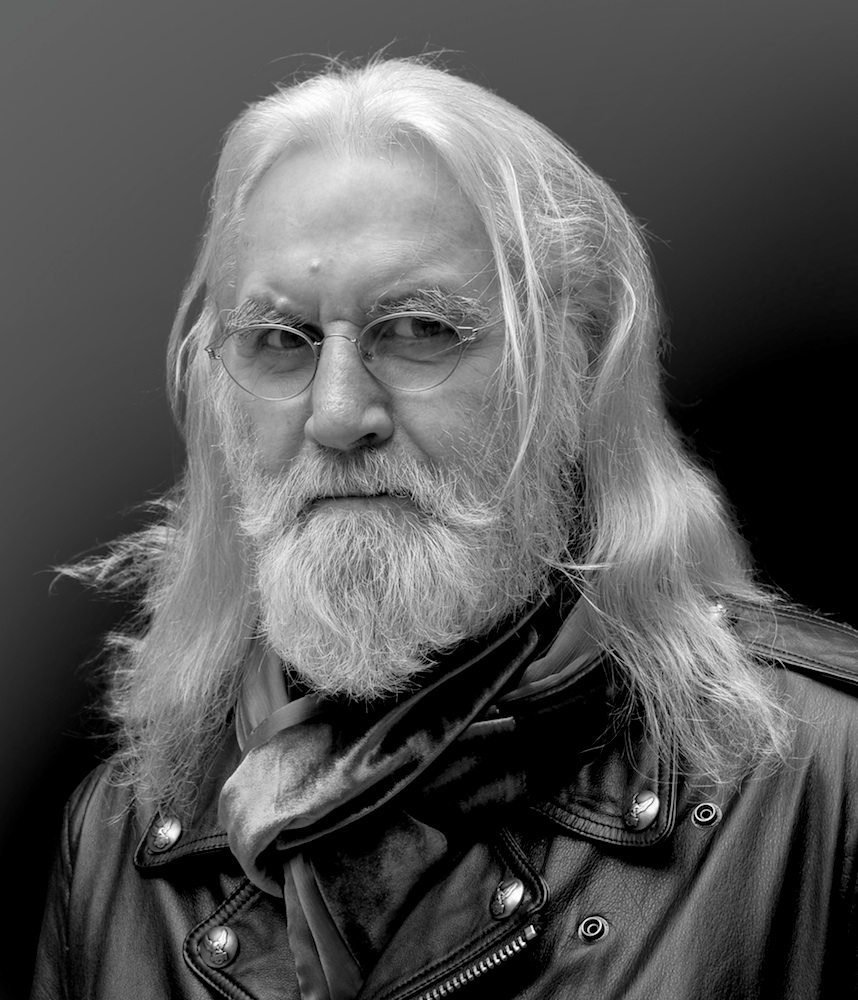 There are plenty of famous Billy Connolly jokes: the infamous bicycle-bum joke Connolly told during his first appearance on the British television show Parkinson in 1975; “The Crucifixion,” which explains how the Last Supper took place in Glasgow, not Galilee; and among the most frequently cited is, “Never trust a man who, when left alone in a room with a tea cozy, doesn’t try it on.” It is perhaps a little tamer than some of the Glaswegian comedian and actor’s other quotes, but it demonstrates his offbeat, playful sense of humor. Connolly doesn’t seem to mind, either: “I used to have that written on the wall of my house,” he explains over the phone.

Since leaving school as a teenager, Connolly has been a welder, a folk singer, a comedian, and a BAFTA-nominated actor. In January, he was presented with a special National Television Award by his friend Dustin Hoffman. Much of the comedian’s recent coverage has focused on his health (Connolly was diagnosed with Parkinson’s disease in 2012), but at 73, he is still active and performing. This Wednesday, he’ll bring his “High Horse” show to the Beacon Theatre in New York, and he has May shows scheduled in Boston and Washington, D.C.

EMMA BROWN: You performed this tour in Scotland and New Zealand in 2014, right?

BILLY CONNOLLY: Actually I performed in Los Angeles first, and then Scotland.

BROWN: What made you want to bring it to the East Coast?

CONNOLLY: I don’t know. I used to live there and I know a lot of people there. I thought I’d be comfortable there. I’ve done various gigs in New York—The Bottom Line, that’s not open anymore. I’ve done the Beacon Theatre. I did Carnegie Hall 20 years ago. I like the Beacon because I can pretend I’m Bob Dylan—that’s who I last saw there. Or the Allman Brothers.

BROWN: Is it difficult to come down after a show?

CONNOLLY: No, I find it extremely easy. It happens to me very quickly. It used to take all night because I would drink and smoke and carouse. Now I just come off and I switch off, and then I plunge into darkness and have to go to bed.

BROWN: Do you feel like your audience has changed over the years?

CONNOLLY: I have no idea. I’ve given the audience pretty much the same stuff everywhere I go; I don’t change it to suit them. I don’t know if they’ve changed a lot, but they seem okay to me.

BROWN: Do fans ever send you things?

CONNOLLY: Oh yeah, lots of times. All sorts of silly things. People do portraits of you and send them to you. Most of them are horrendous. I’ve had little china figures of myself. I’ve had portraits of myself wearing women’s clothes. A guy even sent me a picture of me of a woman with my head. I must say, I was very attractive though. [laughs] A distinct improvement.

BROWN: I was reading some of your old interviews and you said that anywhere you’re vulnerable, you’re funny. Is it hard to stay vulnerable once you’re well known?

CONNOLLY: Well, what I was talking about was the sex act or going to the bathroom or any time you’re naked, and that doesn’t change when you’re famous.

BROWN: So not emotionally vulnerable?

CONNOLLY: If you’re going to do an interview about a movie or anything like that, you’re vulnerable. You say stupid things. Or if you’re applying for a green card you feel very vulnerable and you’re likely to spout out something stupid in the middle of it all.

BROWN: Did you spout out something stupid in your green card interview?

CONNOLLY: No, but the man said something strange to me. He gave me a little card to look at, his personal card. I looked at it and he said, “The back, the back!” So I looked around the back and there was a little piece of sticky tape and underneath that was a hair off someone’s head. I said, “Whose hair is that?” And he said “Mother Theresa.”

BROWN: That’s terrifying. What did you say?

CONNOLLY: [laughs] I said, “That’s beautiful,” and handed it back. He was very good to me. He treated me well.

BROWN: Who or what makes you laugh?

CONNOLLY: At the moment, I’ve been laughing at an Englishman called Stewart Lee. I find him extremely funny and bright. But most people make me laugh. I think comedy is difficult, and I’m amazed so many people want to do it. I’ll be buying jeans and somebody will say, “I’m a comedian”—the guy selling you the jeans. The desire to be a comedian is weird. I found it weird myself to want to be one; I was a schoolboy when I wanted to be one but I didn’t know how to do it. That was 50 years ago, so times have changed greatly. There seems to be a long line of people desperate to do it and most of them are quite good.

BROWN: Do you carry a notebook?

CONNOLLY: No, I used to, but I just keep it in my head now. Let it get all mixed up. I look at a lot of people and their stuff sounds written. I tire of it quickly. I just go with the flow and talk. I have a set act of things I’m definitely going to say, or I intend to say, and then I get waylaid in the middle of it and off I go. It suits me lovely.

BROWN: Do you ever skip parts of your set act?

CONNOLLY: Yeah, I do because I thought everybody did that. I thought that’s the way you did it. I don’t mix with comedians, so I don’t know what they’re thinking. That’s how I come up with this stuff that looks like me. A lot of them are beginning to look kind of the same; don’t you find that? There’s a rhythm an awful lot of them employ. Sometimes I’ll watch comedy by mistake. I’ll be on Netflix and I’ll come across somebody. That’s how I came across Stewart Lee. It’s delightful, but then it’s scary.

BROWN: What do you say when people ask you for advice about becoming a comedian?

CONNOLLY: Just go and do it. There’s no other advice you can give them. Just get up and try it. I used to say go around and see as much as you can, and then steal the best stuff and go up with that as an act, but now I don’t say that anymore. I just say go and do it. You’ll regret it forever. You’ll be 65 and say, “Shit, I could’ve done it, I’m better than them.” It’ll be too late.

BROWN: Do you remember the last time you died on stage?

BROWN: What do you do when that happens?

CONNOLLY: I just burst out laughing. It works very well.

BROWN: I know in the ’70s you went on tour with Elton John, and you’ve said that his audience wasn’t really your audience and they didn’t really get you.

CONNOLLY: Yeah, they were throwing frisbees at me. It wasn’t their fault; I wasn’t on the program, I wasn’t on the marquee, I wasn’t on the t-shirt. So they went “Ladies and gentlemen…” and the place goes [cheers] “…Elton’s friend.” And they go [boos]. If you’ve ever been to a rock show and you see the opening act, it’s terrible what they do to them. They don’t get use of the lights, they don’t get the proper sound. It’s a shame. I enjoyed being with Elton. It was lovely.

BROWN: I can’t imagine how crazy it must’ve been in the ’70s.

BROWN: Did you ever get starstruck?

CONNOLLY: I’m very starstruck. It never leaves you. Eric Clapton is a friend of mine, but he doesn’t know I’m his biggest fan and I get nervous when I meet him. I behave like his friend. I don’t think it ever leaves you.

BROWN: Do you ever get scripts that describe the character as “someone like Billy Connolly?”

CONNOLLY: Oh, I get a lot of stuff like that. I get a lot of those ones that say, “I see you playing a man very like yourself. I’m hoping to get Sean Connery as your father and Ewan McGregor as your brother.” But they never come to anything. I wouldn’t mind doing it if it was a decent script.

BROWN: What do you do when you’re not feeling particularly happy?

CONNOLLY: The first thing I do is put on Little Richard. “Tutti Frutti.” It’s impossible to be in a bad mood, because by the time it’s finished you’ll be dancing around the room.

FOR MORE INFORMATION ON BILLY CONNOLLY AND TO VIEW UPCOMING TOUR DATES, VISIT HIS WEBSITE.