Aug 22, 2013
The 57-year-old cult director Wong Kar-Wai—whose hyper-stylized films like In the Mood for Love (2000) and Chungking Express (1994) swerved Hong Kong's Second Wave into a new visual tableau, filled with swirling cigarette smoke and bleeding colors—is probably the only guy in the world who can pull off wearing sunglasses indoors. by Michelle Lhooq and Madeline Rudin

May 03, 2012
With the 75th anniversary of the iconic sunglasses manufacturer, Ray-Ban underway, INTERVIEW celebrates the NEVER HIDE moments of a few influential leaders in art, fashion, music and film. We've met quite a few characters over the decades, but here are some of our favorite interviewees and icons, artists who never shied away from marching to the beat of their own drum. Here we talk to James Franco: Apr 30, 2012
We're huddled together in a sterilized room of a midtown PR agency together with Harmony Korine and Val Kilmer, the star of Korine's latest venture, The Fourth Dimension, which just played the Tribeca Film Festival. Also in the room is Vice's Eddy Moretti, the executive producer and co-writer of a "creative brief" used to steer the movie. What’s Up, Doc?: Franco and Olds on Francophrenia

Apr 18, 2012
Like a typical grad student enthusiastically unpacking his latest project, James Franco has a lot to say about the many "layers" of his new movie—cheekily named Francophrenia (Or Don't Kill Me, I Know Where The Baby Is). The film is an offspring of his highly scrutinized, three-year stint playing a serial killer artist (also named Franco) on General Hospital. After bringing his own camera crew to record his behind-the-scenes antics while on set for the final episode, Franco surprised everyone by repurposing the documentary footage into an entirely different movie. 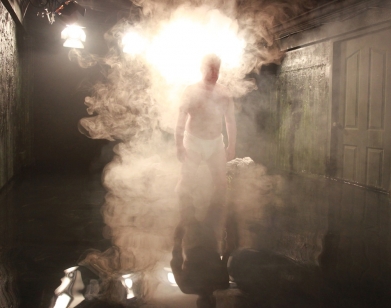 Tzu Nyen Ho’s Head Is in the Clouds

Jan 05, 2012
Shot in a decaying block of vacated apartments in the remote outskirts of Singapore, The Cloud of Unknowing by Singaporean filmmaker Tzu Nyen Ho is fittingly flooded with ghostly presences. Dec 08, 2011
A pill-popping, alcoholic mother and her castrated daughter aren't regular material for children's animations. Yet co-directors, designers, and producers Emma Burch and Pete Williamson were able to turn such macabre material into a charmingly gloomy independent short, Being Bradford Dillman.