“You got to keep making art. That’s my personal salvation,” says the photographer Jeannete Montgomery Barron as we make our way through the Patrick Parrish Gallery in downtown New York City. She’s in town for her show, Jeannette Montgomery Barron: Artist Portraits from the 80s, which showcases the images that made the photographer a name in New York’s downtown art scene during the times of the Factory. In a sense, the collection of up-close-and-personal portraits of artists, models, and culture-makers evoke that same air of persistence and defiance. Barron captured a plethora of art revolutionaries—Keith Harring, Jenny Holzer, Francesco Clemente, Bianca Jagger, and Andy Warhol, among others—during trying times that were both political and personal. As she tells me during our walkthrough, the inspiration to show these portraits stems from younger generations’ “romanticized” view of the ’80s. But it’s also an indirect response to modern life—its culture, politics, and the first three months of 2020.

In the hope that her intimate portraits, much like our conversation, inspire young artists and collectors in New York and elsewhere, the photographer is releasing an affordable new edition of one of her portraits from the exhibit. “I think that we don’t even know how much stress we’re all under right now, with everything that’s going on in the world,” Barron says. “Whenever I feel depressed, I have to take a picture, draw, or something.” Below the photographer opens up and gets personal about some of her portraits, from her gym dates with Jagger to smoking a joint with Robert Mapplethorpe, along with all the times she spent hanging out at the Factory with Warhol and Jean-Michel Basquiat. “The one person I did become really good friends with is Bianca Jagger—which is the most unlikely pairing. I photographed her for the German Cosmopolitan, and she loved the pictures. We got together and looked at the pictures and the contact sheets, then she said, ‘I want to do a book. Let’s do it together.’ We would hang out, we went to the gym together, we’d go to lunch. This is really funny because the book never happened. She was wearing Calvin Klein. She was very late for the shoot because Bianca was always late. Do you know Niall Smith? Biedermeier was very big back then and anyway, he had an apartment in Chelsea, and I said, ‘Niall, would you let me shoot Bianca in your house?'” “He was the first person who came and bought a ton of my photographs—40 photographs in one day. He wanted to buy more, but I didn’t have anymore. He wanted to buy anything. That’s the way he does, he collects in bulk. That’s a special one for me, because that same day he said, ‘I’d like to do a catalog of your work, a book.’ And I said, ‘Great.’ I didn’t really take it seriously. But then I worked with him pretty closely, where he would call me and say, ‘Go photograph Andy [Warhol] and Jean-Michel [Basquiat], because they’re doing paintings together, and I’m going to do a show, and I need a picture for the catalog.’ He would arrange it. There was a woman named Beth Phillips who made sure everything was rolling. This is in front of a Warhol of two of his kids, Magnus and Cora. I’m still very close with all of them.” “This was at Interview at The Factory. They got together and it was, I guess, Beth Phillips who said, ‘Go, meet them at The Factory, at such and such time.’ This was in Fred Hughes‘s office because Andy always liked to be photographed in Fred’s office. I don’t know why. Jean-Michel was smoking, he had these huge spliffs. I think there were two or three, and he proceeded to smoke them. I was always in The Factory because one of my buddies was Paige Powell. She would call me up and say, ‘Come over, because blah blah blah is here, and you should meet them.’ Or Bianca would call me and say, ‘Come down for lunch. We’re having a big lunch. There’s Boy George and Quentin Crisp.’ They were definitely cool.” “I never printed this because I didn’t like it. This is a modern print from 2013. I didn’t like any of the pictures I took before. This is what happens. You go back, you’re older, you have a different eye, and you say, ‘What happened? This is a nice picture of Jenny.’ Do you know what I probably didn’t like? There’s probably just too much stuff going on. I like minimal. I probably just got mad at myself for not making it starker. She loves this picture, too, and I’m always happy when the person likes it.” “This was for a German art magazine. I used to work with a woman named Fatima Igramhan, who just kind of knew who was coming through town. All the Germans coming through, she would wrangle them. She asked Desmond Cadogan to come over and model—they fell in love that day. For years after, Desmond was the figure in all of his paintings. They’re still good friends.” “This is the first artist portrait I took. I have a ton of him. He’s great with the camera. This one sort of sparked everything. I got so many photos of Francesco that day. I showed them to my brother and he said, ‘You really should do a whole series of artists.'” “This was in that townhouse they lived in. Not the first one, but the one where they spent all the money on. I knew them from wherever. I must have bumped into them and asked them if I could photograph them, at some opening. They had a protege there, it was the bad guy they talk about in the book.  They had a fax machine in there though. That was really odd because you know how they said in their book (I’ve Seen the Future and I’m Not Going) that they didn’t have any electricity—That was curious to me.” “This one … I think it really echoed what he was feeling at that time, because I know he was struggling with drugs. While I was photographing, he was very nervous. Some people came in, and they went into the bathroom. He was calmer after that. I think that one sort of makes me sad. This was really the height of his career.” 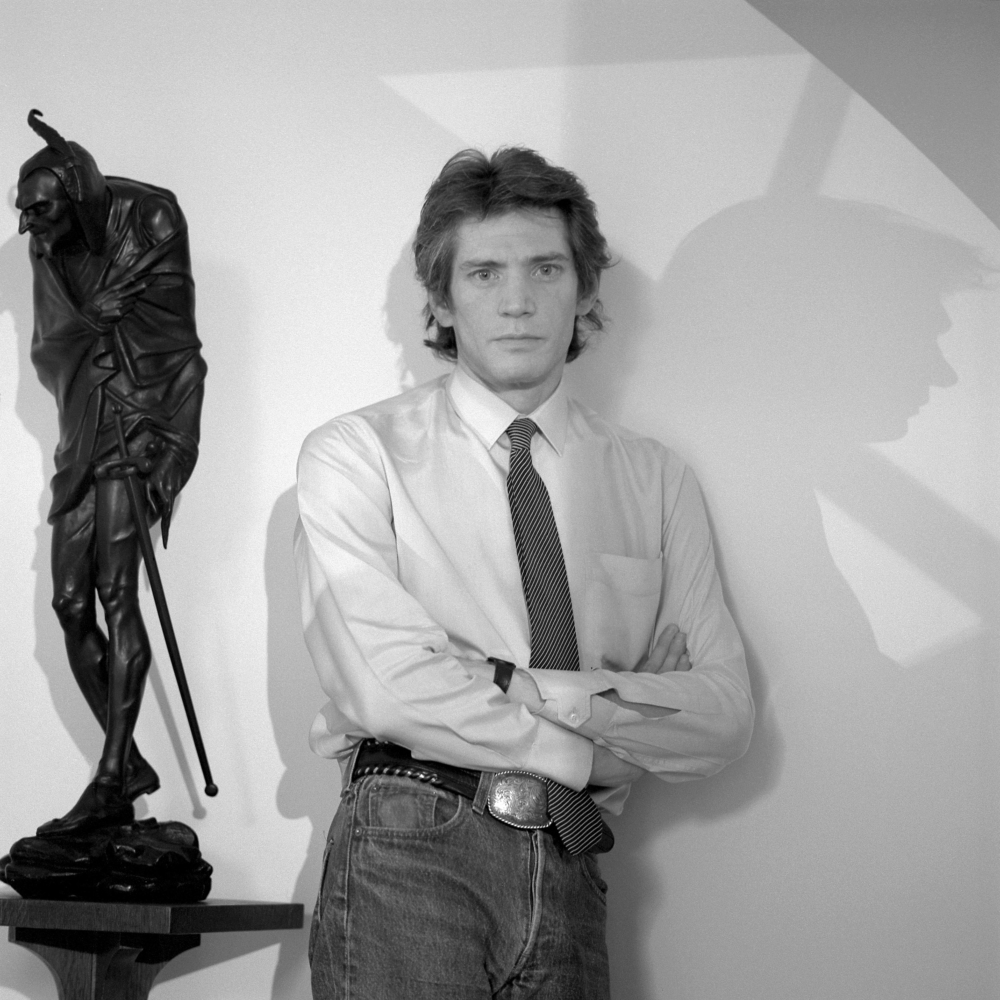 “I really admire Mapplethorpe. This was at his apartment on 23rd street. For me to photograph a photographer that I admire was a challenge. I was very nervous. I get nervous before I take any portrait. I thought he was going to be looking at me like, ‘What is she doing? She’s not doing it right.’ He was super sweet and asked me a lot of questions about my work. After, we sat down and we had chocolate milk and a joint. He died pretty soon after that. I would have loved to know him.” “I can’t remember how I got to him, but he was on the list of numbers, or maybe Francesco Clemente told me, ‘You should go photograph Keith.’ But anyway, this was at his studio—I think it was on Broadway. Pretty sure. Again, another artist who I would love to see what he would be doing right now. I have a whole series of him, going through all of the poses. It’s like a flipbook.”