“Into” is a series dedicated to objects, artworks, garments, exhibitions, and all kinds of things that we are into—and there really isn’t a lot more to it than that. Today: Mara Veitch explores the restorative power of Sarah Zapata’s lush textile installations.

Things are beginning to devolve inside of apartments everywhere. You’ve called everyone you’ve ever had a conversation with to tell them that you’re baking. “Second breakfast” is an unquestioned institution. Work time and free time spill together in an unsatisfying mess, and you’ve started talking to yourself.

While you’re migrating back and forth between bed and couch, the Brooklyn-based artist Sarah Zapata is busy creating the indoor dreamscape we’re all hungry for. Zapata’s shaggy, womb-like installations constitute the perfect antidote to the gauzy disassociation and aimless fatigue brought on by isolation; her fuzzy moonscapes seem to be mined directly from the subconscious, creeping up walls and piling atop one another in eerie humanoid forms, elevating the realm of domestic labor and ethnically-delineated craftwork to a glorious fever pitch. Zapata’s determination to restore the nobility of work, from invisible and cheap to time-consuming and precious, is particularly resonant in a moment when our labor is deemed either non-essential or life-threatening. As life at home gets weird, Zapata’s hand-woven creations seep through the cracks between fantasy and reality. For last year’s A Famine of Hearing exhibition at Performance Space New York, Zapata channeled her Peruvian heritage into a technicolor fantasy world in which familiar textures—shag, weaving— and rich colors blur the viewer’s sensory boundaries as they erode the barriers between art and domesticity. Zapata’s work examines the exploitative nature of gendered labor even as it celebrates its nobility; at her 2017 exhibition If I Could, Zapata blanketed the floor of Long Island’s Deli Gallery with thick, fluorescent rugs and invited viewers to exalt, barefoot, in an array of textures. But pleasure comes at a price. For the privilege of feeling the shag between their toes, viewers were compelled to weave between the delirious patchwork figures, slumped and disjointed, that were scattered throughout the space like workers in a field. Zapata’s refusal to separate the object of pleasure from the backbreaking labor behind it has never been more relevant. Her creations present the possibility of a future in which labor is celebrated, compensated, and revered in all its sensory, psychedelic glory.

The World According to Karen Finley 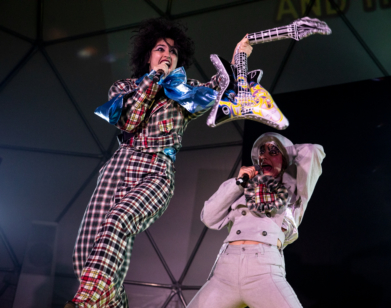