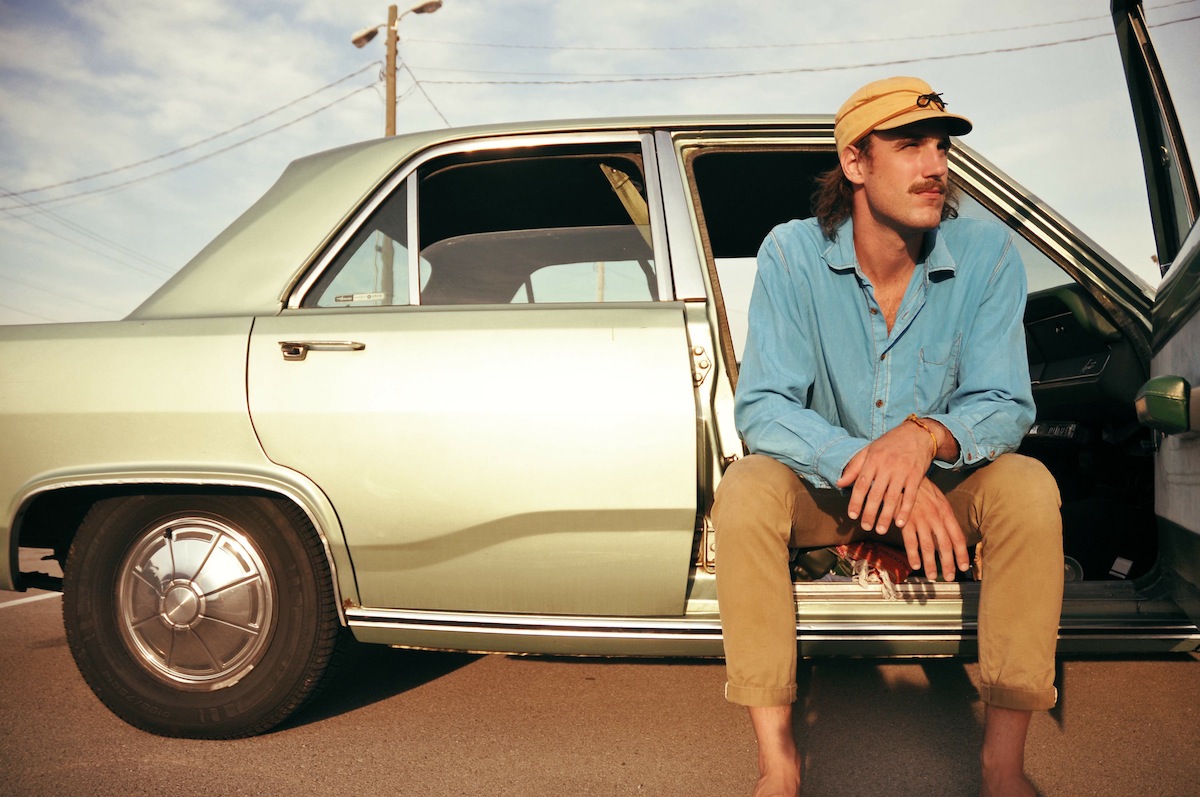 Rayland Baxter may boast an impressive musical pedigree—his father, Bucky, played pedal steel guitar for Dylan in the ‘90s and has appeared on albums by R.E.M., Steve Earl, and Ryan Adams, amongst others—but he’ll be the first to tell you that music came to him at a later age. An athlete throughout his teenage years (he played lacrosse at Loyola University Maryland), the singer sidestepped the family business until his early 20s, when he left college and began busking for tips in small-town Colorado. Now 28 and rooted firmly back in his hometown of Nashville, Tennessee, Baxter is set to release his debut album, feathers & fishHooks, on ATO tomorrow. While the collection’s title underscores the carefree attitude of a recreation angler with a proclivity for the good life, its 12 tracks (which get a boost from the multi-instrumental talents of Baxter senior) betray the studied, well-worn maturity of a songwriter who has done his fair share of living.

Anxious to hear the stories behind these tunes—not to mention more about his life as an adolescent jock—we caught up with Baxter as he took in some R&R in his hometown last week.

JEFF OLOIZIA: So your album release party is in Nashville on Tuesday.

OLOIZIA: What do you think it is about Nashville, specifically, that brings about all this great music? Is there something geographically or even spiritually unique about the place?

BAXTER: Well, geographically, it’s a shit hole. It’s in a valley, it’s the worst place for pollen count… You know, the Native Americans didn’t even occupy any land around here; they would come in to hunt and they would go back to the hills. So geographically, it doesn’t make any sense, other than the fucking Cumberland River is here. I don’t know how Nashville started and I don’t know why musicians came here, but they’re here, and there’s a whole bunch of them. And it’s a small town, as well. If I went out seven nights in a row, I would see 50 people I know every night. So people get into loving each other and talking about what they are up to, and everybody’s sharing and joining in with each other. I also feel that Nashville is just the coolest it’s ever been. I mean, just the culture that’s happening here—the young kids, the garage bands that are happening, people getting sick and tired of the shit music that’s been coming out of here…

BAXTER: So it’s almost, like, all of our duty to put Nashville back on the map. There’s something really special going on here.

OLOIZIA: I think people only tend to think of Nashville as a country town, and—you know, country music is not a dirty word by any means—but that label seems limiting.

BAXTER: Absolutely. Like, tonight I’m going to go and see Big Freedia play, and I’ll probably see a bunch of my friends there. We don’t really listen to that type of music, but it’s cool as hell and we’re gonna go. [laughs]

OLOIZIA: I read that you spent a fair amount of time in Israel.

BAXTER: The winter of 2008, I left Breckenridge, Colorado, and I was living in a camper with, like, one little space heater. I was in a tow-behind camper parked in front of this lady’s house, and it sucked. I was poor and I was working four jobs. So I got this gig as a guitar tech for a band my dad was in and we went to Europe for three weeks, after which my old man was like, “Let’s go to Israel and see my buddy Andre.”

So we went out there and I fell in love with him and his family, just as my dad had. Andre is a huge fan of music, like a massive Bob head. He loves those songwriters: Townes Van Zandt, Leonard Cohen, Ryan Adams, Steve Earle, Harry Nilsson… So I got schooled on that while I was out there. There was separate part of the house that was a barn, which turned into a studio and a hang room and I pretty much stayed out here all night, every night, until four or five in the morning just listening to records and watching documentaries on all these guys, and I wrote a bunch. So it was just a breeding ground for finding out what type of a writer I was going to become.

The first time I was there, I stayed for six months, where I traveled around Israel and saw the Dead Sea, went to Jerusalem a couple of times, partied in Tel Aviv with some strangers, went to a music festival called Boombamela, which is right on the Mediterranean. There’s lots of hitchhikers and travelers around from all over, so there’s lots of free people, and for such a war-torn country—and it’s so hectic there all the time—everybody is really relaxed. I can’t pinpoint the effect it had on me, but it did have an effect. It would just trip me out, how these people—there are bombs flying maybe over their heads every day, and they’re just happy to smile and walk you into their restaurant. Long story short, I went back to the United States and then went back to Israel three more times, the most important being the first and the second because that’s when I was there writing the whole time. I figured out what I was supposed to be doing with my life when I was there.

OLOIZIA: And that’s where you wrote the song “Olivia,” correct?

BAXTER: That song’s about when I was on tour in Europe and I met this French perfection named Olivia. She’s short, pale skin, dark hair, Bettie Page bangs; she works for a French lingerie company. And I was just head over heels, and I think she felt the same for me. But then I found another French beauty [laughs] and got myself involved with two women in Paris, France. Olivia found out about the other one, and that’s the story behind that song. Not that you were asking.

OLOIZIA: It makes for a good song.

OLOIZIA: Do you remember the first song you ever wrote?

BAXTER: I do. I wrote one song in college, but it was stupid. You know how Toby Keith has that song about the red Solo cup? It was about a red Solo cup. Of course, you know… college. But the first I wrote and sang more than two times, I wrote in Colorado. It was called “Lovin’ Life,” and I’ll probably never play it again, ’cause it’s probably the lamest-sounding shit you’ll hear. Especially compared to what I’m writing these days. But it was called “Lovin’ Life,” and wrote it when I was in Colorado just loving life, living by a river with a dog, fishing every day, and playing music.

OLOIZIA: And what does Rayland Baxter love most about life? What makes you the happiest?

BAXTER: The happiest? I’m always in the pursuit of happiness. Being around my friends. Having my bills paid. I grew up in a poor house, and I obsess about money too much. It almost prevents me from living joyfully some days, just stressing out. Like right now, I literally have one dollar to my name and I have no idea how I’m going to get through September. It’s crazy. So I’ve been eating—we have chickens in the back yard—I eat the eggs. Fishing makes me happy, being outside. Affecting people in a positive way makes me happy. Always changing, always evolving—that’s kind of like the umbrella, always doing good and evolving. Bob Dylan said, “An artist is always in the state of becoming.” I liked when he said that. That really rang true.

OLOIZIA: Well speaking of Dylan, I know you’re a fan, so I thought we could end by running through some questions that Dylan answered for Interview back in February ’86. Sound good?

BAXTER: Let’s do it.

OLOIZIA: Three bands you wish you had been in.

BAXTER: The Grateful Dead, Velvet Underground, and The Shins.

OLOIZIA: Two authors you would read anything by.

BAXTER: Let’s say Bukowski. And… can it be a poet?

BAXTER: Wendell Berry. He’s a badass poet and he writes poems about his wife and, like, a river and shit.

BAXTER: I like the Loyola College men’s lacrosse team, that’s my college that I went to. They won the National Championships this year. Or if you really want two, Kevin Durant and Hope Solo. I have a crush on Hope Solo.

OLOIZIA: An event you wished you witnessed.

BAXTER: The Rolling Thunder Review. One of those shows.

BAXTER: Bradley Nowell [from Sublime], first of all. And then let’s see… I guess Barack Obama, the President. Actually fuck that, I don’t wanna play golf with him. Security would be all over the place. I would like to be in his presence one day, though, ‘cause he’s a pretty captivating human being. I’d probably get the chills.

OLOIZIA: And the second and third?

BAXTER: Fucking Bob Dylan. And my dad, back when he played golf back in high school. He was a Virginia state champion golfer.

BAXTER: Tonight? My sister’s cooking like a kale and miso soup.

BAXTER: I don’t even know what to say to this, because everything that comes to my mind makes me sound like a pervert. [laughs] I am a pervert, but I don’t want that. Can you just gesture that I wink at you and pass on the question?

OLOIZIA: Sounds good. What’s the best cure for the blues?

BAXTER: Get in your car and drive across country. Go move.

OLOIZIA: Okay, last one. How would you describe your moustache?

RAYLAND BAXTER’S FEATHERS & FISHHOOKS IS OUT TOMORROW. FOR MORE ON THE ARTIST, VISIT HIS WEBSITE.