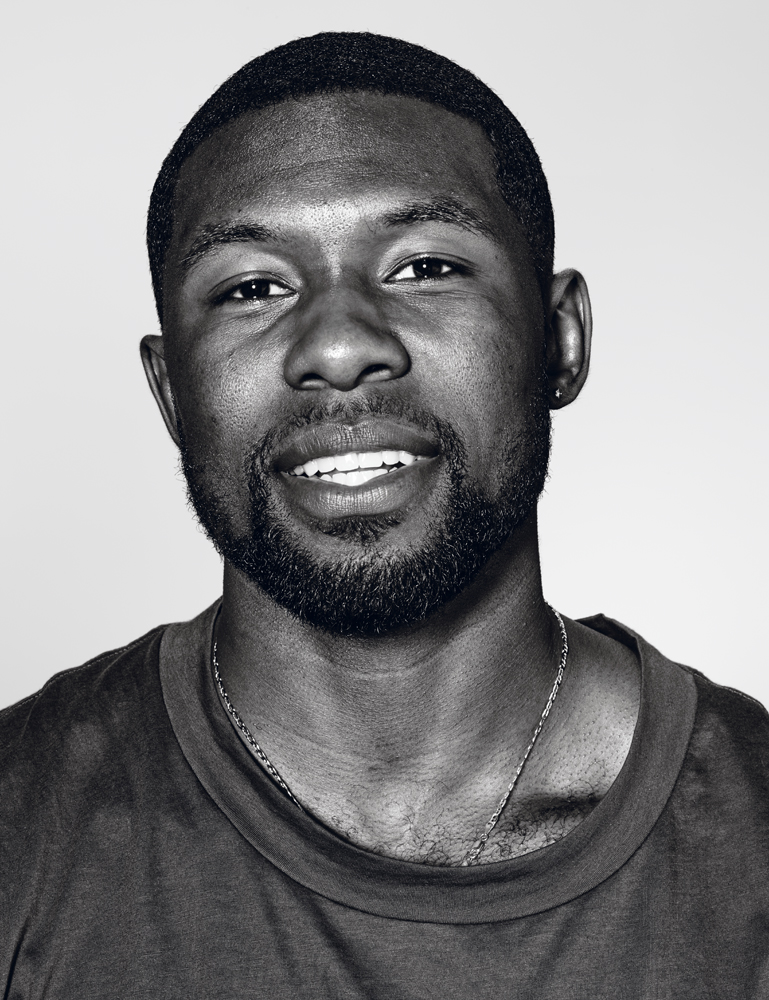 New York is blowing Trevante Rhodes’s mind. “I’m in sensory overload right now,” he says, sitting outside of the Coffee Shop in Union Square during a visit to New York. The 26-year-old actor’s eyes dance as he watches people and considers the stories they may carry. His conversation is effervescent, affirmative, and often punctuated with “bro.” At a frenetic pace, he zooms through subjects ranging from acting to his love of pizza (“my drug”) for about 20 minutes until he grinds it to a halt. “Sorry, man, hold on,” he says, turning his head away while trying in vain to prevent himself from tearing up.

What turned Rhodes misty was the recollection of the journey to self-acceptance of a gay friend he’s known since he was young. That friend provided Rhodes understanding for the role of Chiron, which he plays in Barry Jenkins’s acclaimed new film, Moonlight. The movie’s central question (“Who is you, Chiron?”) is explored over the course of three acts that follow its central character in different phases of his life: as a prepubescent boy, in high school, and as an adult. Rhodes plays the oldest iteration of Chiron, who, years after his first sexual experience with another man, carries a torch that lights the way to their reunion. Rhodes calls Moonlight “the truest love story ever.”

Rhodes, who is “completely” straight, used his friend’s experience for the gay material, but elements of his own life prepared him for the role, including being estranged from his father and having experienced bullying. Growing up in Dallas, Rhodes never considered acting as a career path. It wasn’t until he was discovered by a casting agent while running on the campus of University of Texas at Austin that he seriously considered Hollywood. He didn’t get the role he was up for but soon started landing parts in productions including Terrence Malick’s upcoming movie Weightless, the Tyler Perry series If Loving You Is Wrong, and HBO’s Westworld. It was on the set of Moonlight, though, specifically during a scene with the character’s mother that required him to cry, when Rhodes says he fell in love with acting. Though Jenkins told him to “save it,” Rhodes recalls that he cried on every take through sheer empathy with his character.

As for those who will respond to one of the few representations of black queer masculinity in our diversity-starved culture, perhaps anointing straight Rhodes a gay icon, the actor says bring it on. “I embrace it one million percent,” he says. “Hell yeah, bro.”

RICH JUZWIAK: This could be one of the last times you can comfortably pass through New York without being hounded by fans.

TREVANTE RHODES: I don’t know how I feel about that yet. People watching is my favorite thing to do. This is blowing my mind. I fixate on one person and then I think about the struggles in their life. I think about what made them walk the way they do.

RHODES: Recently. I think during [Moonlight]. To me, acting used to be just, “Get my face out there, get girls, make a little bit of money, make my mom proud.” It was just like sports. But there were moments in Moonlight that I really felt like I had to know why he is the way he is. Or just people in general: Why this person walks around with a frown on their face instead of a smile. Something in their life happened—in their childhood most of the time—that forced them to believe whatever they believe about other people.

JUZWIAK: It strikes me as odd that people are referring to Moonlight as a gay movie, when your character Chiron never explicitly identifies as gay. What do you think about that?

RHODES: I think people will and should call it whatever they need to. I like that ambiguity. Not knowing certain things. I appreciate Barry for that. But what I think is that it’s a movie about identity. It’s a movie about love, at least in Chiron’s eyes, and that’s the only way I want to look at it. I think in [his love interest] Kevin’s eyes it’s a bit different, but I think Chiron looks at Kevin as his one true love. How many of us have been with one person our entire life? It happens so early on, so the fact that that was the only person was the most beautiful thing in the world to me.

JUZWIAK: Did you have any trepidation about playing a character who loves a man?

RHODES: Not at all. The question people ask me all the time is, “How was it playing a gay character? How was it pretending to love a man?” And I don’t mean to be abrasive, but that’s just the stupidest question in the world to me. To assume there is a difference is ignorance. You’re born a certain way. I was born loving women. I could have been born loving men. It’s the same fucking thing, man. Strip away race, strip away gender, strip away sexual orientation, we’re all these little blobs seeking out love. We’re all connected; we’re all the fucking same. I get heated when people ask that.

JUZWIAK: My question was more about your career.

RHODES: That too. To me, it’s whatever speaks to me. Not only was this script just crazy, but it was the most truthful thing that I ever read. At this point in my career, it’s so early, for me to even have an opportunity like this was insane. I don’t know why I got the script, I didn’t know why they wanted to see me, but I knew I was going to make the most of it.

RHODES: I feel like I, more than anything, related to his not knowing who he is. I’m the way I am now because I was bullied when I was the lanky, gangly, skinny kid. I was the guy who would flick everybody off and my middle finger was this skinny, long stick. I got picked on because of that. I got picked on because I was dark as hell. “Blackie,” “tar baby,” these are nicknames people gave me. I related to not knowing who I was, being picked on for who I was, and not having a good relationship, if a relationship at all, with my father. Growing up without a father makes you seek out that male companionship in other ways.

And then growing up with a best friend who is a homosexual and seeing what he had to go through with his family, with other people, and not being able to identify with anyone because he felt like no one would be able to relate, and all these things.

JUZWIAK: I think people can grow up feeling wrong because they have no point of reference and we tend to learn so much about ourselves and the world through pop culture.

JUZWIAK: It would be very easy for you as a straight guy to not care what happens to queer people and their well-being and their place in culture. What makes you care?

RHODES: My mother brought me up to care about everybody and everything. Early on, I didn’t know what from what. Everybody is everybody. It didn’t become apparent to me until my best friend. He didn’t want to accept it and it was mind-boggling to me to see this person that I loved not accept himself. It’s real. It’s life. For him to be shunned by his family and all this shit, that affected me.

JUZWIAK: When you cry in the movie, was that real?

RHODES: We cried every take, bro. It was real to me. It was being in it with Naomie [Harris], who’s incredible. In Chiron’s mind, that was the first time she told him that she loved him in 15, 20 years, genuinely. Before that it was to get money. She looked at me in my eyes and told me that she loved me. What kid doesn’t want to hear that from a family member who’s been shitty to them their entire life? I was just being Chiron then, which was a blessing, because it was such a beautiful moment.

I didn’t cry for the first time since then until 2014. Growing up, especially as a black man, you have to be that much better, that much stronger than your counterparts. Crying is for weak people. You don’t want to be weak; you want to be strong. So I put that away a long time ago. I didn’t cry at my grandmother’s funeral. That was the person who raised me along with my mother. I remember being there, everyone else bawling, and I had no emotional anything. It pissed me off. I wanted to cry but I couldn’t. And in 2014, I don’t know what the hell I was doing, but one day I was outside walking, thinking about her, because I always thought about her, and something happened and I just fucking bawled for hours. To the point where my eyes were fucking swollen. Ever since then, I let things affect me and receive people as they come, which is dangerous because half the people in the world don’t give a fuck about you. I don’t even know if these people are real, to be honest with you. It’s stupid to let people affect you. But like you, you’re a genuine person. This is a real moment. We’re the same and this is beautiful. This is rare, but when you find that it’s the best thing. That’s something that I seek out. It’s fucking addicting. You let that happen and everything in life feels better.

RHODES: I think I am decent at acting because of sports. Track is a team sport, but it’s you. You’re focused on your own lane. When you go to an audition, you can’t worry about what everybody else is doing; you have to focus on your own shit. If you win the gold, it contributes to the team; if you give your best performance, it contributes to the movie. The movie’s a success because everybody killed their individual events. It’s the same thing to me. I approach it the same exact way. I told my team, “If at all possible, I know it’s tough, but I want Jake Gyllenhaal, Eddie Redmayne, Michael Fassbender”—I want to encapsulate all that. And I want to be the black version.