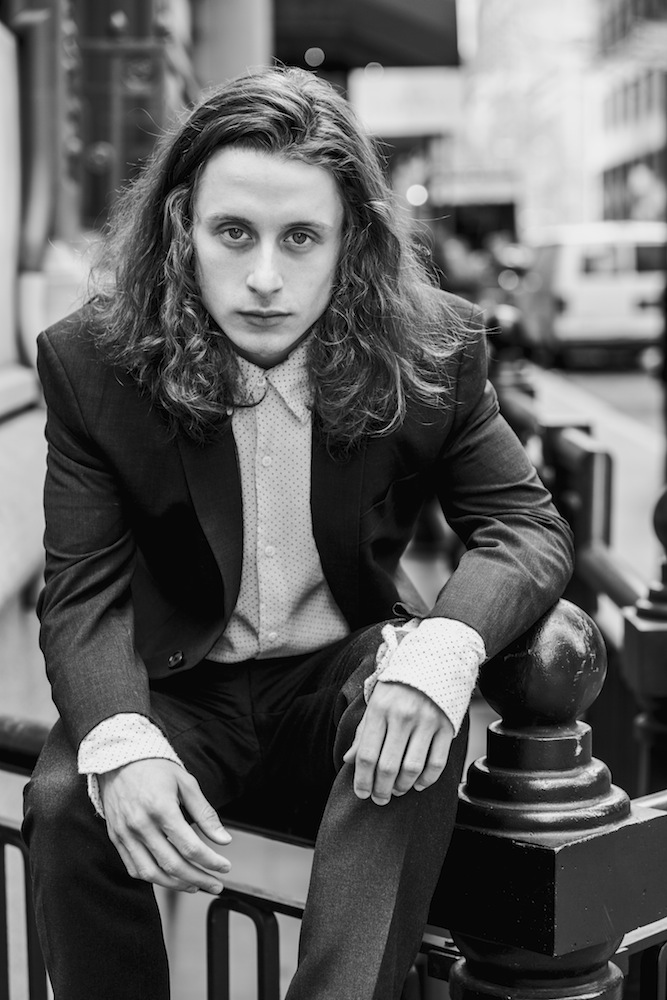 The first film from writer-director Lou Howe, Gabriel carefully explores the mind of a troubled young man. Following his self-rationalized thoughts and fears, the eponymous protagonist takes the audience on an unconventional search for the conventional hallmarks of a “good life.” Under the careful direction of Howe, Rory Culkin takes center stage in a realistic portrayal of a fragile, paranoid youth. Like most of us, Gabriel yearns for love and unconditional acceptance. From the first frame to the last frame, the anxiety is palpable.

Now 24, Culkin has been acting regularly since he was 11. Gabriel is Culkin’s sixteenth feature film and certainly his most involved character yet. Last Friday Culkin sat down with Frank Sun, whom he first met while Sun was working in the camera department of Gabriel, at the Carlton Hotel in New York.

FRANK SUN: Rory, this is your 16th feature. Do you feel like Gabriel is a highlight of some of the roles you’ve played in the past couple of years?

RORY CULKIN: Definitely. This is the part I was most invested in of any of them. It took the most out of me—I didn’t realize until we were done shooting. I got home and was just fucking worn out. Anything that anyone said to me just hurt me; I was super sensitive for a while afterwards.

SUN: How did you come across the script? Why did this role appeal to you?

CULKIN: I had heard about this script and finally got a hold of it. Then I sat down with Lou [and] we pretty much just talked about how scary the world is. I think that’s what won him over. I didn’t come at it talking about how tragic Gabriel’s story is, I came at it from the point the view of Gabriel and thinking that he’s always right, and that everyone else is crazy for not being paranoid. Paranoia is reality because this world is fucking scary. You’re all going to work [but] look at the sky! What the hell is the sky? And why aren’t we talking about this? You guys are out of your minds! So I gave him this huge rant to Lou and that’s what won him over.

SUN: Just hearing you talking about it now, it feels like it’s easy for you to snap into that character. Are there any correlations of your personal life that makes you feel like Gabriel?

CULKIN: [laughs] Yeah. It’s unavoidable that a piece of yourself is going to be involved in any character you play, but with Gabriel especially, I talked to young people who struggled with mental illness [and] a lot of what they are saying was eerily familiar to me. I felt that way all the time! Most of us feel that way, we just have the filter to not say the inappropriate things, and these people just don’t have the filter. So it was just about removing the filter and also remembering how I felt when I was seven. A lot of it is about holding onto pieces of your childhood—you are never going to be as close to your childhood as you are right now, and you want it back.

SUN: Did you often revisit your childhood when you were preparing for the film?

KULKIN: One second Gabriel is a five-year-old boy, the next he gets really, really ugly and says awful things. It’s the balance of going back and forth between being an adult and being a child. Like I was saying, I let Lou inside of my head and he knew the key words—like “battlefield,” “I got it, I know what you mean,” “fan” “I got it,” “zip face,” “I got it.” Key words that are very minimum and efficient.

SUN: What was it like working with Lou? Did you feel safe?

KULKIN: Totally. And finally, because I’m not sitting next to him, from the actor’s standpoint, he’s the perfect director. I never felt lost for a second. If I did feel lost, it was the key words and bang, I got it. Thank you so much. Never a moment wasted. There were a lot of times when everything blacked out around me and it was just us. I had to be sort of selfish to be Gabriel and he was into it. It was great.

SUN: How much did you rehearse?

SUN: How did you find your connections with Gabriel’s mom, brother, and love interest?

KULKIN: To be Gabriel, I had to think that I was always right. I knew better than everyone I was talking to. They were either bad people, regular people, or just stupid. The way I chose to interact with my mother, I can tell she’s not evil, but she’s stupid—she thinks she knows better, but she doesn’t. That’s the mind set I had to be in: I’m right and they are wrong—they are all bad guys and only Alice and I are good guys. I’ve got to link up with other good guys and vent. [laughs] With the brother, it was pretty unique to the screen. I have a great relationship with my brothers—with David Call playing that character, even watching it now, I’m still not convinced if he’s a good guy. He was acting like Gabriel is an inconvenience—you have to pick him up from the bus, but you like doing that. You like taking charge. You like that I am an inconvenience to you. After watching it, I’m still not convinced that he’s a good guy, but that’s probably because I’m still in Gabriel’s mindset.

SUN:  I remember seeing you, one month, two months, and three months after the film at your iPod parties. You were still in character! [laughs] I was confused. I thought today you’d still be in character, but I’m surprised you’re not. What made you stay in that zone?

CULKIN: I didn’t want to be. The last shot we did of the movie I was in a bathtub. I wanted to leave the Gabriel in the bathtub, for sure—wash it off and be done. [But] I went home and nope, I was still Gabriel—still made out of glass, just super sensitive. I guess it took time for it to wear off. After seeing the screening he’s creeping back in my head… Who are these fucking people! [laughs] It’s weird. Gabriel went deep in my head. I’ve never had to dig so deep before; it made an impression.

SUN: Tell me about filming in the Hamptons in the winter.

CULKIN: It was damn cold! It was fine. We had this scene on the beach with Alice [played by Emily Meade]—there was one thing that was frustrating. We did her coverage first, and it was windy and everything was chaotic. When we turned [the camera] around on me, everything became calm. If we could only flip that! She should be calm and I should be chaotic—it was kind of frustrating.

GABRIEL IS CURRENTLY SCREENING AT THE TRIBECA FILM FESTIVAL.