The Focus of Mike Cahill 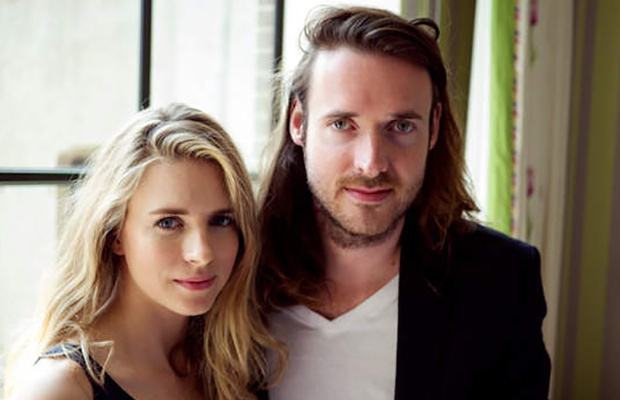 ABOVE: I, ORIGINS STAR BRIT MARLING AND DIRECTOR MIKE CAHILL

A favorite argument of creationists has to do with the human eye: its structure and functionality, anti-evolution activists contend, is too delicate and precise to have evolved over time, and thus it could only have been created by some divine force.

Debunking that seed of argument is the life’s work of Dr. Ian Gray (Michael Pitt) and his partner Karen (Brit Marling), the evolutionary biologists at the center of writer-director Mike Cahill’s smart, lyrical new film, I, Origins. In the course of their research attempting to find a blind “origin species” to which sight could conceivably be introduced—and of Ian’s relationship with a beautiful, ethereal young woman (Astrid Bergès-Frisbey)—they makes a series of startling discoveries whose implications extend well beyond the realm of the scientific.

The film’s emphasis on scientific rigor is strong; so it’s a little ironic that a film scholar attempting to illustrate auteur theory could adapt a version of that same creationist argument to describe I, Origins itself. The film’s plot is so intricate, involving so many disparate areas of interest—fundamental scientific research; the power of romantic attraction; cutting-edge biometric technology; the possibility of reincarnation; elevator mechanics—that it can only have been painstakingly assembled by a loving creator. In his second film, Cahill expands on many of the themes he explored in 2011’s Another Earth; most notably, both the vast possibilities of science and everything it leaves unexplained.

ALEXANDRIA SYMONDS: Ian studies evolution, and that’s a term that writers and scientists share. Do you think there’s anything to be said about the connection between the narrative idea of evolution and the scientific one?

MIKE CAHILL: So, the character’s evolution over the story and evolution as a scientific idea of survival of the fittest. [pauses] Other than James Bond, your character should evolve, I think. So I thought, what if we were to take the most hard-nosed, scientific, atheistic, Richard Dawkins-type character—could we get him to pray at the end of the movie?

SYMONDS: So that was a specific goal?

CAHILL: Yeah. That was a goal. It’s a bit mathematical in storytelling structure, and obviously it’s more organic when you do it, but that’s something you’re thinking about, is how the character changes by the end of it, and if you can pull it off—which requires brilliant acting. Because you can write whatever you want, but if Michael Pitt’s character doesn’t look into the little girl’s eyes at the end with that face and that expression, it’s not going to work.

SYMONDS: That’s such a beautiful moment.

CAHILL: It’s a beautiful moment. Thank you for saying that. That’s those guys. You know that he’s changed. Nothing said. We don’t know what he’s said. We know what he’s thinking. We feel it, and that was enough, just carrying him down the stairs.

SYMONDS: So much of the film is about the essence of identity, too. How do you personally reconcile the idea of a personal evolution, or growth or change within one person, with fundamental things that we can believe about ourselves, or the idea of an identity or soul?

CAHILL: Well, I’m fascinated with the question. It’s the first philosophical question you can ask yourself when you’re six years old, which is, “Who am I?” And you didn’t need to go to school for that. You didn’t need to read 45 books of Hume, Kant, Descartes, Democritus, whomever the fuck. You just can ask that question with no history and no education, because it’s so fundamental. Where do we end, and what is the self? You cut off your arm, you’re still yourself. You cut off two of your arms, you’re still yourself. You cut off your arms and your legs, you’re still yourself, right? Also, the idea of the self seems to be embedded right around here, right around the eyes. Infants know to look at the eyes.

SYMONDS: Right behind them, maybe, too.

CAHILL: Right behind them, too. And also, infants—when they cover their eyes, they think they’re hiding. I remember that. So—what was the question again?

SYMONDS: There’s a flux between the essential things we understand about a person like Ian or a person like Sofi, versus how that character is going to develop throughout this narrative. How do you understand yourself and what you believe about yourself in the context of that?

CAHILL: You’re saying how does one pin down a self if you are morphing constantly from day to day to day—both physiologically; you are not the same cells that you were when you were five years old, and also ideologically, spiritually. All that, experientially, that changes constantly. We are morphing as we go through things, and then we’re presented with the notion of a soul. A soul implies more than just the preservation of energy. Science will tell you that you can explode a person, but their energy still exists—even if they’re decimated, the universe will preserve that in the form of heat or whatever it is. So there’s a preservation of our molecules or whatever, but is there a preservation of a thing that’s called the self if that thing is not actually ever one thing? Boy, that’s a heavy question.

SYMONDS: [laughs] I think even just re-explaining it in that way…

CAHILL: Yeah, I mean, the movie makes a bold claim that that morphing could continue, or that changing-being. The line doesn’t break, necessarily. You’ll keep going, continue to keep morphing, but it’ll be one continuous gradient as opposed to an entirely different entity. And that may be something about memory, psychology, phobia, desires. But that kind of stuff is left wide open at the end.

SYMONDS: And I think there’s a lot of cultural precedent for that, too. The fact that archetypes exist would seem to suggest that maybe you’re on to something about collective memory, collective experience.

CAHILL: Right, yeah. That is true. And there’s no such thing as originality.

CAHILL: There you go.

SYMONDS: It’s such a complicated film, and there are a lot of variables in play. In what order did the elements of this script occur to you? Whatever kind of initial germ of an idea you had, how did everything else get filled in?

CAHILL: I’ll tell you this. I was in Croatia, on an island called Brioni. It’s where Tito had his residence. It’s in the Adriatic Sea. It’s a beautiful place. There’s all these animals, zebras and giraffes, because all these foreign leaders would give Tito these gifts, and it’s a beautiful place you can holiday. There are not that many people there—there’s two small hotels—and you just ride bicycles around it. There’s a spot on the far end of the island where there are these Roman ruins. It’s sort of simple, and you see the streets, how it was, and the old stones laid out; you can walk through them and take pictures and whatnot, and it’s on the beach.

SYMONDS: What did they think was going on there? [laughs]

CAHILL: Yeah, what did they think was going on there? It was right under their noses, and they didn’t capture or ever understand the relevance or the significance of it. And then I started thinking, well, what are our dinosaur footprints? What’s right in front of our noses that we keep missing, that we miss, and some future generation will be like, “Oh, those naïve humans. I can’t believe that they didn’t realize that the eye really was the window to the soul! It’s divine biometrics!” [Symonds laughs] For example. I like that idea. What’s right here, the mundane that we just sort of ignore?

SYMONDS: Yeah, Sofi has that beautiful speech that gets at that.

CAHILL: Right, the secret of the worms, too. I like Krysztof KieÅ?lowski—I like filmmakers that try to touch upon the metaphysical, the things that are behind all this, that you can’t actually physically interact with, but are somehow intuitively there. Maybe you can see the ashes of that fire or the echoes of something happening on a domain not-here, whether that be coincidence, whether that be familiarity with somebody who’s a stranger. We see enough to be like, “Hmm, is there something else going on here that is not tables and chairs and lamps and posters and televisions and shoes?” So I feel like I wanted to somehow make a movie that can show that this natural world is the domain of science, and science has within its language a way to, at least through metaphor, understand that there can be an inaccessible domain above us. Just like three senses for a two-sensed worm, there could be six senses for a five-sensed human.

SYMONDS: Did KieÅ?lowski make The Double Life of Véronique? That’s a beautiful movie.

CAHILL: Such a beautiful movie. That’s one of my favorite movies of all time. I saw it at Lincoln Center. I remember walking there from Brooklyn, which is really far to walk, and then I sat there by myself with a bunch of strangers and we were all bawling-crying and I just felt so connected to everybody in the theater. I was like, “This is what movies should be like.”

SYMONDS: I’m not surprised you’re a fan of it. Something it, I, Origins, and Another Earth have in common, too, is you seem to be very interested in this idea of doubles or multiples.

CAHILL: Reflections in the mirror. Other representations of one self, over and over.

SYMONDS: One of my best friends does origin-of-life research in a lab at Harvard. Just before I saw your film, we were talking about how he feels compelled a lot of the time to justify what he’s doing to people who don’t believe that basic research like that is important because it’s not immediately going to cure cancer.

SYMONDS: Do you feel, in making movies like this, that there’s some sort of moral imperative there?

CAHILL: My two older brothers are both molecular biologists and neuroscientists, and I feel like representing them accurately is never done in movies, and I really wanted to at least capture the spirit of a Ph.D. student whose goal and aspiration is to increase the sum total of human knowledge. That is noble. That was really, really important, to capture the three-dimensionality of scientists. Scientists fall in love, scientists have the greatest sense of humor, scientists are passionate.

CAHILL: They go to parties!

SYMONDS: They have sex with strangers.

CAHILL: They have sex with strangers! They are real people. They just happen to be the most interesting people that I know, because they care about learning and not being numb. That feeling, when Karen says, “That night when I was lying in bed and I was the only person on the planet who knew I was on the cutting edge of human knowledge”—that hits me viscerally. That’s not just an idea. That can fuel revolution.

I, ORIGINS IS OUT IN LIMITED RELEASE TODAY, JULY 18.