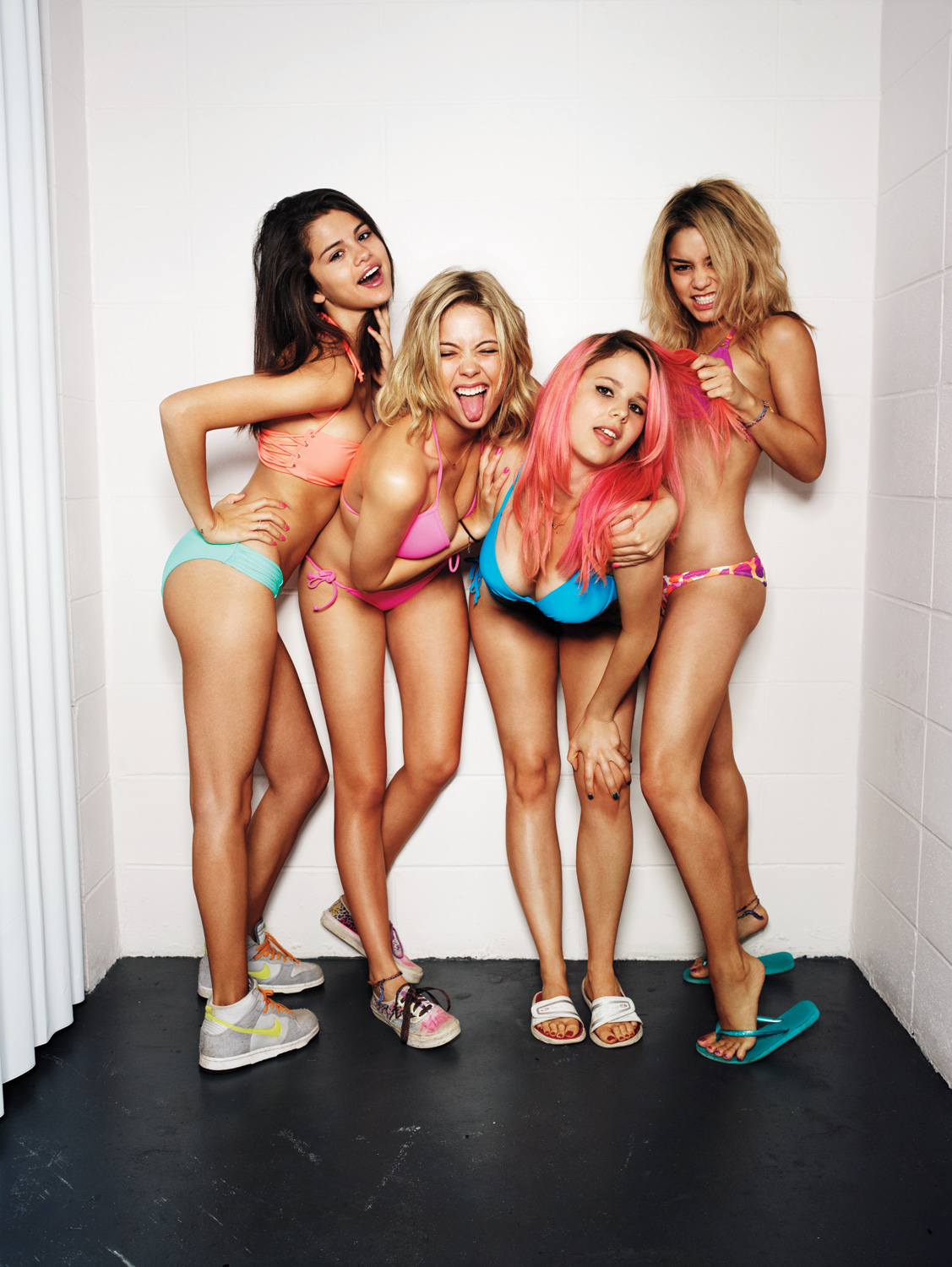 Chances are good that if you have an Internet connection, you’re already aware of how Harmony Korine spent his spring break. Photos from the Florida set of Korine’s latest film, Spring Breakers—some taken by paparazzi, many shot by the cast and crew themselves—began appearing online in March, quickly invading Facebook, Twitter, Instagram, and virtually every other image-sharing social-media channel, and instantly generating the kind of viral buzz that ought to be the envy of every big studio marketing department in the country. In fact, Spring Breakers hadn’t even wrapped shooting (and won’t be in theaters until later this year at the earliest) when images of the film’s principals—Selena Gomez, Vanessa Hudgens, and Ashley Benson clad in neon bikinis, and James Franco done up as a gun-toting vision of Kevin Federline by way of The Dude—passed into pop culture’s visual lexicon. “I liked the idea of the film as a social experiment,” says Korine. “It was like there were two movies—the actual movie, and then the one that the media, paparazzi, and the people tweeting photos were also creating.”

Spring Breakers stars Gomez, Hudgens, Benson, and Korine’s wife, Rachel Korine, as a quartet of college students who land in jail after robbing a restaurant to fund their spring break trip. The foursome is bailed out by Alien (Franco), a drug-dealer and gunrunner, who seduces the girls into his world. Drugs, sex, and violence ensue. (Gucci Mane, Glee‘s Heather Morris, and skateboarding weirdoes the ATL Twins also feature.) “When I wrote the script, I started thinking about girls in bikinis with guns, wearing ski masks,” Korine recalls. “I was like, ‘Where would you see that?’ And the idea of spring break came to me. I just started imagining girls on spring break robbing places.”

Even for a guy whose last feature was the 2009 film Trash Humpers (in which trash is, indeed, humped), Spring Breakers represents a radical move. Korine admits that it might have the most commercial potential of any film he has directed. If so, he owes that largely to his cast: the girls are a major draw—Gomez, for one, has more than 29 million Facebook fans. And what would a weird spring-break crime film/media-art project that either is or isn’t an earnest attempt at creating mainstream fare be without Franco? “When Harmony told me who he was going to cast, I thought it was perfect for so many reasons,” Franco says. “The young actresses are so excited to do a movie like this with someone like Harmony. They were so eager and enthusiastic to be a part of it.”

For her part, Gomez agrees. “I was getting kind of repetitive in terms of the roles I was picking, and I really wanted to do something that was completely different,” she says. “It was a mark thing for me—like, ‘This is what I want to be doing.’ I want to be taking myself seriously as an actress, and this was definitely a stretch.” She adds: “I mean, I’d never smoked a cigarette before in my entire life. It was really funny—they had to show me how to do it.”

Benson, best known for her roles on the ABC Family series Pretty Little Liars and the daytime soap Days of Our Lives, approached the opportunity to show a side of herself that’s not necessarily family-friendly with equal relish. “Harmony wanted to break us all out of the good-girl mold,” she says. “For Selena, Vanessa, and me, our audience is all in their teens or younger, so they’re not even going to be able to see this when it comes out—it’s not appropriate.”

Hewing to his raw, full-frontal aesthetic, Korine shot Spring Breakers in and around St. Petersburg during March and April, just as actual spring break was in full effect, and recruited as extras some 500 kids who just happened to be there partaking in bacchanalia. The realism extended to the details of the characters’ outfits. “I had to keep in mind where these girls are from: a small town in the South,” says the film’s costume designer, Heidi Bivens. “What they were wearing at school had to be stuff they could find where they were living. And then when they come to spring break, it changes, because they’re able to shop in St. Petersburg.” Some authentic-feeling elements proved harder to find. “The most challenging for me were the ski masks that the girls wear,” says Bivens. “They’re supposed to glow fluorescent, but there aren’t any ski masks I could find that were the color we needed in the daylight and that would glow under black light, so I had to start experimenting with dyes. I probably went through 20 different dyes to find the right one.”

Of course, Korine rose to acclaim after writing the script for Kids, the 1995 parental nightmare directed by Larry Clark that introduced the world to Chloë Sevigny, Rosario Dawson, and the uncomfortable realities of a kind of teen life that Korine himself inhabited as a skater kid in downtown New York City. Spring Breakers is similarly fascinated by youth gone wild. “Everybody likes to have fun, and everybody imagines that somebody else is having more fun than they are because they’re willing to break all the rules-to the point of getting arrested,” says one the film’s producers, Chris Hanley. In a way, Korine says that Spring Breakers is his attempt to capture something that he’d missed the first time around. “I grew up in Nashville, but I was a skater, so I was skateboarding during spring break,” he says. “Everyone I knew would go to Daytona Beach and the Redneck Riviera and just fuck and get drunk—you know, as a rite of passage. I never went. I guess this is my way of going.”