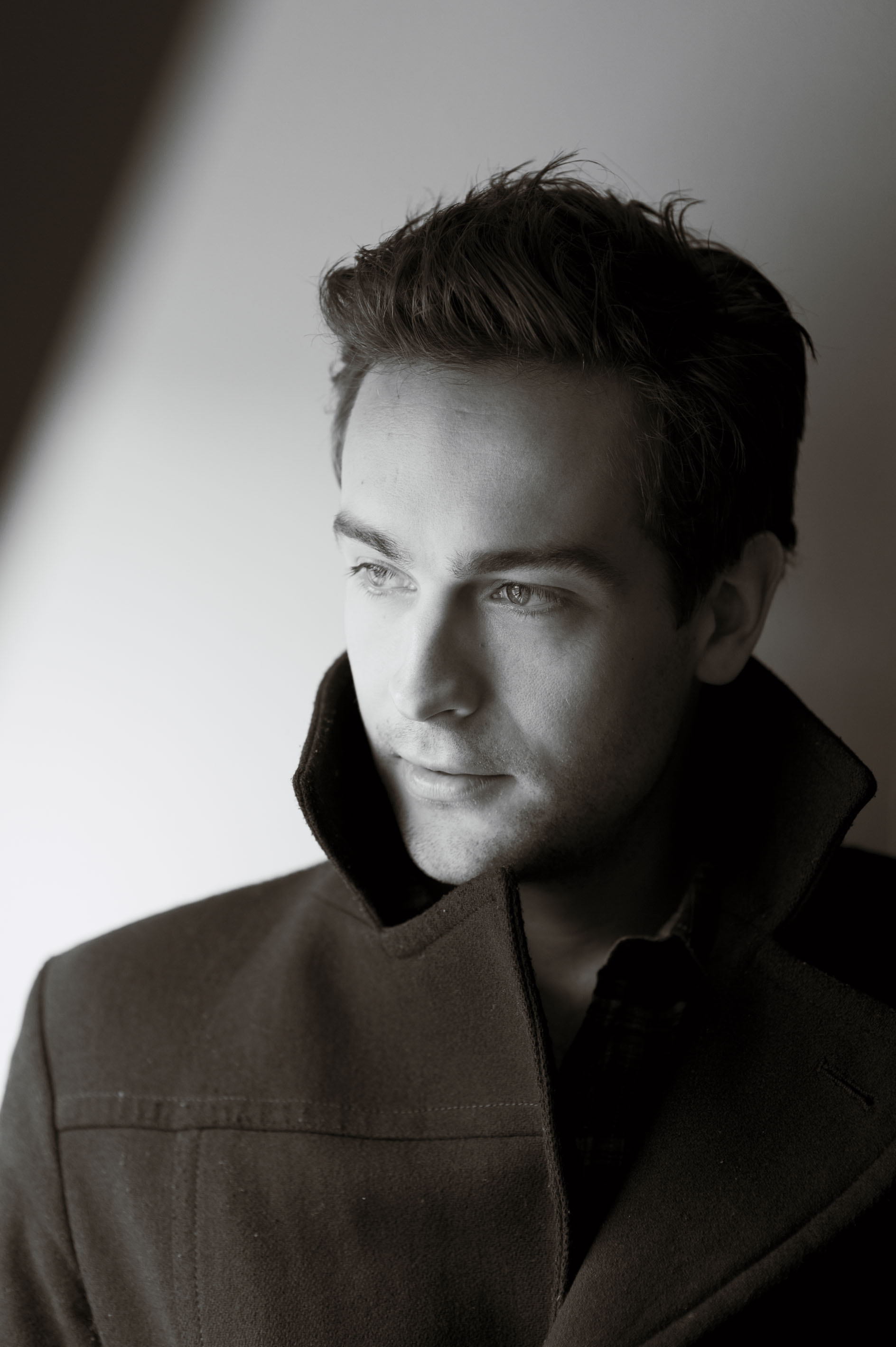 British actor Tom Mison is in good company in Salmon Fishing in the Yemen—the film stars Ewan McGregor, Emily Blunt, and a wonderfully hilarious Kristin Scott Thomas. Mison’s role is small; he plays Emily Blunt’s boyfriend, a special forces soldier who spends most of the film “missing in action.” Still, it is not the easiest role to pull off—if you’re thinking, “Emily Blunt has a boyfriend in the film, isn’t she supposed to be falling in love with Ewan McGregor?” you are on the right track (we don’t want to give the whole film away, but it’s pretty obvious if you’ve watched the trailer…). Mison has to believably love and gracefully relinquish Emily Blunt, without leaving us feeling too sorry for him or dampening her blossoming feelings for McGregor.

You might recognize Mison from One Day, but other than that, Mison has worked predominantly on smaller British films. He is very much part of the young London actors scene—jumping from plays on London’s West End to TV mini-series, such as the upcoming HBO/BBC series, Parade’s End, to writing a short with his friend and former roommate, Rupert Friend, The Continuing and Lamentable Saga of the Suicide Brothers. In Lamentable Saga, which won best short at the Rhode Island Horror Film Festival, Mison and Friend play “brothers, in lederhosen, who try and kill themselves everyday at two o’clock, with hilarious consequences. Keira Knightley plays our fairy… it was one of those brilliant ideas that you get after a few whiskies.”

Interview chatted with Mison via phone about his role in Salmon Fishing in the Yemen,  Morocco, and getting caught out when you “exaggerate” on your résumé.

WORKING WITH KRISTIN SCOTT THOMAS: I wasn’t intimidated. Everyone’s too nice to be intimidated by. If there are actors that are brilliant, people often wonder whether it’s intimidating working alongside them, but it really isn’t. It just makes you up your game and want to be better. Rather than cowering in their shadows, it’s very encouraging to see someone who’s incredible; it makes me want to be a bit more like them.

ON THE IMPORTANCE OF HAIRCUTS: I had just finished a play in London called Posh, and I had really floppy hair, the complete opposite of a soldier. As soon as I found out I was meeting the producers of Salmon Fishing in the Yemen, I rushed out to try and get a more soldierly haircut, because I knew there wouldn’t have been a chance if I was all floppy and posh-looking. [The character I play] is a [private]-school boy, but there are types of English [private]-school boy: the soldierly private-school boy and the Hugh Grant private-school boy; and [after Posh] I looked like Hugh Grant. I think it was the haircut that did it. Did I shave my head? God, no. I didn’t shave my head, my mother would be appalled!

ON NOT GETTING THE GIRL: I know, it’s not particularly fair. After everything I go through [in Salmon Fishing on the Yemen], you’d think I’d at least get the girl… but no. Apparently not. But it’s fair enough losing out to Ewan [McGregor], if you’re going to lose out to anyone, lose out to him, with that hair and that smile. Did I want to punch Ewan McGregor? [laughs] No, I think my character does the chivalrous, gentlemanly thing. The girl’s happiness is more important than his. He’s a martyr. What happens to my character after the film ends? He’s probably got post-traumatic stress syndrome and no girlfriend. It’s probably tragic. That’s not the story we want to see.

IF THIS SOUNDS A BIT LIKE BEN AFFLECK’S CHARACTER IN PEARL HARBOR: I never thought I’d have a job in my career where I’d get compared to Pearl Harbor. It’s an honor. Thanks. [laughs]

LOST IN MOROCCO: We filmed in a place called Ouarzazate—enjoy spelling that—on the edge of the Sahara, between the Atlas Mountains and the Sahara. It’s gorgeous. It’s a small town that seems to have built itself on the fact that so many films are shot there; any film that needs a desert goes to Ouarzazate. Ridley Scott used it in Gladiator and Prometheus; Lawrence of Arabia was shot there.  Everyone speaks English. You turn up and suddenly lots of people run out of their houses and say, “I’m a props man!” or “I’m a camera man!” Everyone is involved somehow. I was lucky, I had a long week off, so I drove up through the Atlas Mountains and spent the weekend in Marrakesh. I got lost in the souk for two hours, I didn’t have a map, my phone didn’t have any signal, I was just wandering around trying to find… anywhere. I walked around a corner and realized I was probably somewhere I shouldn’t be, and suddenly this 12-year-old boy appeared out of nowhere and said “Follow me, follow me.” He legged it into the crowds, and I was trying to keep up with him, and he finally took me to where I wanted to be. I said, “Thanks very much,” and he went “Uhh… no,” so I gave him all of the change I had in my pockets, because I was very grateful. He looked at it and went “No. Paper.” So I gave him a note, the cheeky bastard, and he looked at the note and said, “Oh, come on! This is shit.” And ran off. I was not expecting that from this beautiful little Moroccan boy.

WHY YOU SHOULDN’T LIE ON YOUR RÉSUMÉ: I shot a French-language film in Paris [L’entente cordiale in 2006]. This was in the early days, before I realized it was probably not a good idea to, um, “bend the truth” on your resume, so I said that I was “fairly fluent” in French, which I wasn’t. My first day I was shooting, I was busted. Daniel Autiel and Christian Clavier [who were both in the film] had been friends for about 30 years, so the director came up to me and said, “They’ve been mates for such a long time, so they are just playing around and improvising. Keep up with them.” I thought, “Oh, bollocks,” because I didn’t have a clue what they were saying. I just tried to listen to anything that vaguely resembled my cue and shout my line whenever I could. I kind of got away with it, but I learned a lesson that every actor needs to learn: don’t lie about what you can do. Did I take other things off my resume after that? [laughs] I did, jet-skiing. I’m joking, I didn’t have jet-skiing on there. Actors always lie about horse-riding and it ends terribly. I can horse-ride…ish.

WHY YOU SHOULD LIE ON YOUR RÉSUMÉ: A friend of mine had put that he was an “expert in skateboarding,” but he’d never been on a skateboard in his life. He was called for an audition and they said, “Bring your skateboard along.” So we went and bought him a skateboard and spent an afternoon trying to scuff it up to make it look like it was used. He went to his audition and they said, “Skate down this hill, stop here and do your little flick up and catch your skateboard.” He really sheepishly walked to the top of the hill and just stood on the skateboard and let it roll down until it naturally came to a stop. He tried to flick it up and it flew off and smashed a light. But they gave him a bigger part. [laughs] Maybe we should lie…

WHAT’S UP NEXT: I’ve just started filming a British film called Jadoo, by a brilliant film director called Amit Gupta. It’s about… curry. I love curry, can’t get enough of it. Good enough reason to do a film in itself, getting fed curry. The director grew up in Leicester, which has a huge Indian community, in a family of restaurateurs, and it’s about that community. The Queen was in Leicester today.

SALMON FISHING IN THE YEMEN IS OUT NOW.