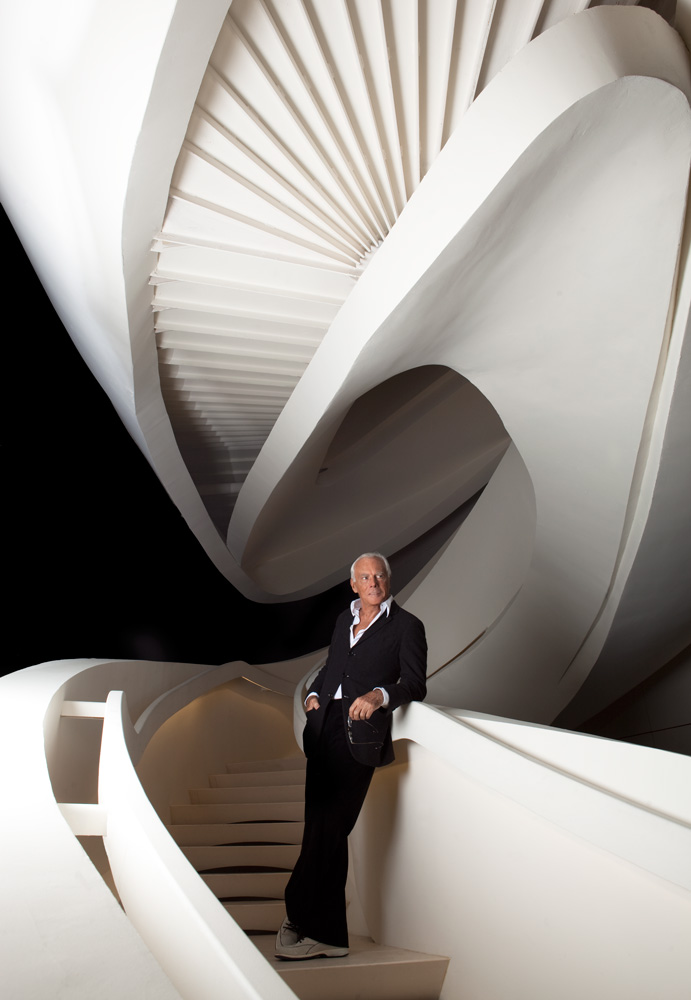 Although Giorgio Armani is the definitive Italian designer, we’ve always considered him an honorary New Yorker. From his tailored ’80s power suits, which basically created Wall Street chic, to his a|x line, which keeps today’s downtown youth looking fashionably street smart, Armani has made more than a mark here—he has dressed the town from up to down. So it’s no surprise that in a time when the city is having a bit of an identity crisis, the 74-year-old designer has increased his presence enormously, opening the four-floor Armani/5th Avenue, a flagship store so ambitious and elegant that it virtually upstages our nearby cathedral. The store has been years in the planning, but opening it now is an enormous boost, not just to the city’s style but to its confidence. Designed by Italian architects Massimiliano and Doriana Fuksas, the glittering glass prism has a white-plastic-material-clad steel staircase as a spinal column that looks as if the Guggenheim were unwound and spun into the core of a Bauhaus gem. The store brings the world of Armani under one roof, from the seminal chic Black Label to the modernist sportswear line ea7 to the exquisite interior objects of Armani/Casa. It’s a delicious irony that a man and a brand with such a rich history have created a store that is practically a manifesto for the future. It’s a store that promises new heights and realized dreams—for fashion and for the city. And speaking of the city’s future, when Mr. Armani arrived in town during Fashion Week to open this grand enterprise (the interiors of which sometimes resemble the starship Enterprise), he just happened to donate $1 million to fund art programs in New York City public schools. We asked Mr. Armani about the future of luxury and what an Armani store on the moon might look like. Like any real thinker, he had answers ready.

INTERVIEW: How has retail changed since you opened your first store?

GIORGIO ARMANI: Retailing has become fiercely competitive. Today there are many large global fashion companies who have opened up mono-brand stores in major cities around the world. When I first opened my boutique in New York, in 1985, there were almost no other European luxury brands present with their own stores. Now Fifth Avenue is packed with huge stores from major Italian and French labels.

INTERVIEW: What do you have to be mindful of, opening a store in 2009, that you didn’t have to consider before?

ARMANI: Firstly, I have to consider the changing habits of 21st-century shoppers. Today, people no longer go out with a total look or ensemble taken straight from the runway. Customers mix and match between labels and between price points. Armani/5th Avenue was conceived in order to meet that demand. A person can come in and pair an elegant Giorgio Armani jacket with a more accessible pair of Armani Jeans denim and Emporio boots. The idea is to create something for yourself: what you want, and how you want it. I realize that shoppers want more flexibility and choice now, and that is what I’m hoping to do with this store.

INTERVIEW: How have the concepts of your various brands changed or evolved over the years? Have they’ve become more alike or less alike?

ARMANI: The brands all are unique in terms of their spirits, but they have the same Armani stamp. There is a level of taste which runs through every single product. Sitting side by side, they are perhaps more stimulating than they would be just on their own. It gives a new idea, a new proposal, a new perspective.

ARMANI: Clean lines have always been important to me, both in terms of interiors as well as fashion. For interiors, I am more interested in textures and surface treatments than bold color or print—the vein on a wood or the shine on a lacquer, for example. I know immediately when something isn’t working—usually it’s a question of consistency—and I make instantaneous decisions on how to remedy the situation.

INTERVIEW: How have you applied your feel for interiors to this store?

ARMANI: The store is pared down to essential elements—nothing more and nothing less. However, the staircase makes a bold, sculptural presence that commands attention. I wanted to do something strong, so I turned to my good friends Massimiliano and Doriana Fuksas and we collaborated on this design concept.

INTERVIEW: How has New York changed for you since you first started visiting?

ARMANI: I have been coming to New York for many years and have an apartment on Central Park West, where I often visit. On my most recent trip, it was interesting to see the changes taking hold as a result of the recession. There were noticeably fewer people on the streets and less energy all around. I am sure this is just a momentary phase, though. I am convinced of the city’s resilience and its ability not only to survive but to rise again. One of the reasons I decided to make a donation, as opposed to spending too much money on a big fashion show, was to help the young people of New York.

INTERVIEW: What is it that you think New Yorkers can do better than even Italians?

ARMANI: Play baseball! I am also impressed with America’s capacity for change, and their ability to bring someone as inspirational and young as Barack Obama into the White House.

INTERVIEW: Which do you think will become more important for fashion and interiors in the future—luxury or utility?

ARMANI: It is imperative to create luxury products that are also functional. My vision for fashion precludes frivolous, fantasy-only designs. That said, fashion does tend to move more quickly than interior design. One doesn’t change their couch every season as one does their wardrobe.

INTERVIEW: If you built an Armani store on the moon in, say, 20 years, what do you imagine it would look like?

ARMANI: How about greige—that’s my beige. I have something of a habit for neutrals.

INTERVIEW: Is your taste for interior design the same for where you work as where you live?

ARMANI: Well, my home happens to be on the same street as my offices, so there is very little delineation between the two. Both are characterized by a minimal, clean design that does not distract. My home is more personal, of course. It’s a mix of objects I have collected from my travels, gifts from close friends, vintage pieces from Jean-Michel Frank, and Armani/Casa. The walls are wrapped floor to ceiling in blond oak to add warmth.