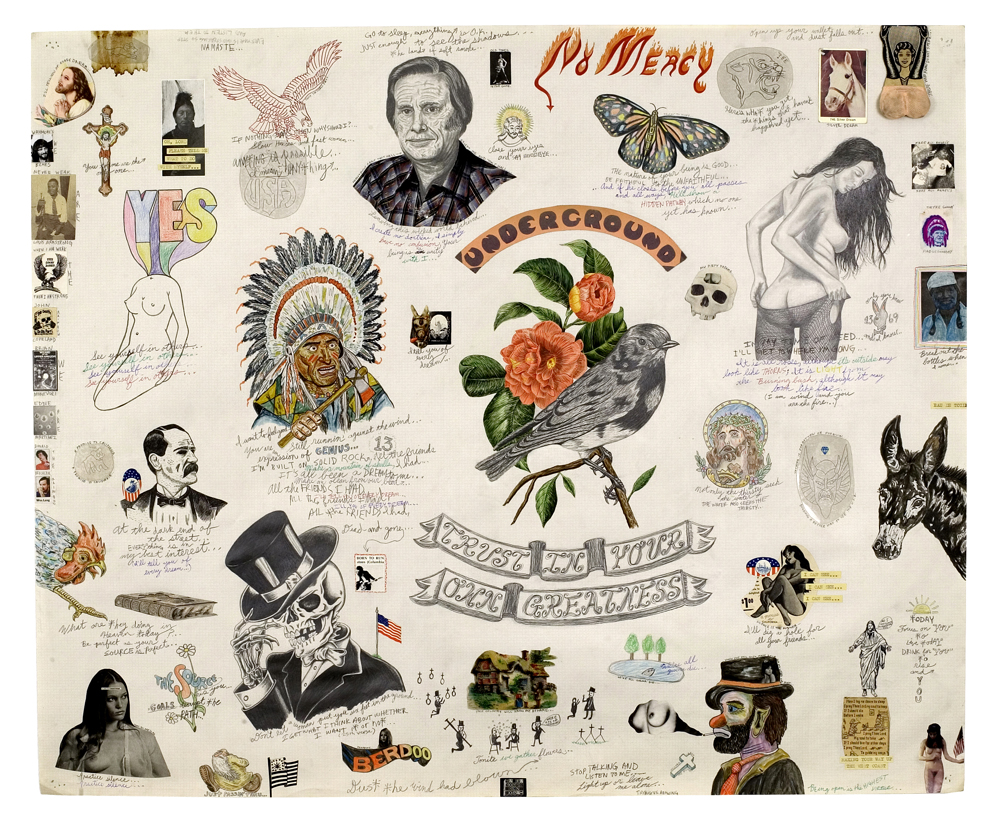 In Wes Lang’s meticulous pencil drawings, America is a land of whiskey and country music, pinup girls and Walt Whitman. It’s not a bad place to be, all things considered—a place of individualism that’s been scarred by history, which pretty much gets reconstructed in Lang’s roving works. The 36-year-old New York artist, who grew up in Chatham, New Jersey, has come to be known for his extraordinary portraits of American Indians, often on display at ZieherSmith gallery in New York. He also recently showed a series of large-scale paintings in “The Destruction of Atlantis,” a group show that took place at Union Gallery in London this past fall.

DAVID COGGINS: Have you turned to painting because you feel that you’ve gone as far as you could go with drawing? Your drawings seem more heavily worked, almost obsessive in their attention to detail. Your paintings are more open.

WES LANG: I go back and forth. Some of my drawings are pretty raw. There’s still an attention to detail in something that looks simple, but in fact is often harder than sitting there meticulously rendering something. I don’t think about it too much-if something strikes me, I just do it.

DC: There’s a clear attraction to American history in your work. What interests you about America, and how does that come out in your work?

I like to take American history and then completely ignore it. I come at it visually, taking images and telling my own story. It comes out of criticism and great love. There are problems [with America], and we all know that, but I’m attracted to the dark side of things.Wes Lang

WL: I like to take American history and then completely ignore it. I come at it visually, taking images and telling my own story. It comes out of criticism and great love. There are problems [with America], and we all know that, but I’m attracted to the dark side of things. I did a bunch of blackface stuff a couple of years ago. That was a little touchy. I wasn’t doing it to piss people off. I was doing a work about Abraham Lincoln, and I came across these images of little mammies. The images were striking and simple, and I was attracted to them.

WL: I’m covered in it, personally. [indicates his tattoos of women, skulls, crosses, and Indians] I’ve always been a collector of weird imagery, even when I was little. There was no question what I wanted to do with myself, since I was very small.

DC: Do you think you’re challenging the audience when you draw a figure in blackface? Do you trust that they’ll know where you’re coming from?

WL: I’m taking it out of its context and putting it into my context and hoping that people can understand that I’m not glorifying this stuff.

DC: How do you feel about being in the art world? Is it something that you enjoy or suffer through?

WL: I don’t hate it by any means. I get to do exactly what I want to do every day. I just try not to spend too much time in it. You have to be a part of it. You can’t just say “I’m the fucking shit,” and forget it. I definitely carry myself with an attitude, though. I’m into bikes and that kind of shit. It helps me sometimes and hinders me other times. But I just want to work with people I trust.

DC: Do you have an official tattoo count?